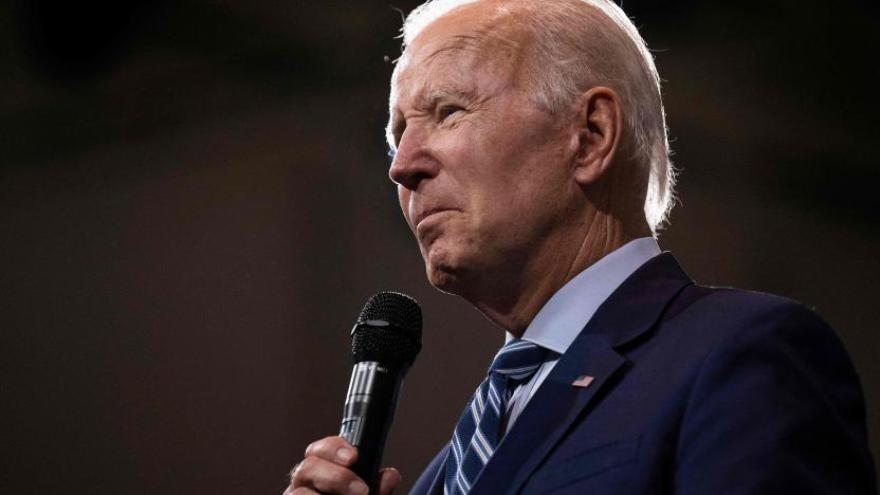 In the latest legal action, the Department of Justice asked the Supreme Court Friday to allow the program to go into effect in the meantime, noting the impact on "economically vulnerable borrowers."

It could take weeks, if not months, for the legal issues to be resolved.

A federal judge in Texas struck down the program nationwide on November 10, declaring it illegal, in the most significant legal setback thus far for Biden's student loan forgiveness program -- prompting the Department of Education to stop accepting applications for debt relief.

Biden's program was already on hold at the time due to a separate legal challenge before the 8th US Circuit Court of Appeals, but the administration had continued accepting applications, having received 26 million to date.

What happens now for borrowers?

Borrowers will have to wait for the lawsuits to play out. While it can be tough to follow all the various legal challenges, borrowers can subscribe for updates from the Department of Education and check the Federal Student Aid website for further information.

Initially, the Biden administration said that it would start granting student loan forgiveness before payments are set to resume in January after a yearslong pandemic pause.

But that timeline is now in jeopardy.

"For the 26 million borrowers who have already given the Department of Education the necessary information to be considered for debt relief -- 16 million of whom have already been approved for relief -- the Department will hold onto their information so it can quickly process their relief once we prevail in court," said White House press secretary Karine Jean-Pierre in a statement following the Texas ruling that struck down the program.

"We strongly disagree with the District Court's ruling on our student debt relief program," she said.

The Department of Justice immediately appealed the Texas judge's ruling to the 5th US Circuit Court of Appeals.

Four days after the Texas decision, the 8th US Circuit Court of Appeals dealt another legal blow to Biden's program, granting a request for a preliminary injunction sought by six GOP-led states in a separate lawsuit. The ruling did not change the status quo since the program was already struck down.

The government has asked the Supreme Court to block the 8th Circuit Court's injunction.

What are the legal arguments?

The Biden administration has argued that Congress granted the secretary of education the power to broadly discharge student loan debt in a 2003 law known as the HEROES Act, which was passed in the wake of the September 11 terrorist attacks.

The government's lawyers argue that the law allows the secretary to discharge debt in an event of a national emergency, including the Covid-19 pandemic.

But the Texas federal judge found that the law does not provide the executive branch clear congressional authorization to create the student loan forgiveness program.

"The program is thus an unconstitutional exercise of Congress's legislative power and must be vacated," wrote Judge Mark Pittman, who was nominated by then-President Donald Trump.

"In this country, we are not ruled by an all-powerful executive with a pen and a phone," he continued.

The Texas lawsuit was filed by a conservative group, the Job Creators Network Foundation, in October on behalf of two borrowers who did not qualify for debt relief.

One plaintiff did not qualify for the student loan forgiveness program because her loans are not held by the federal government and the other plaintiff is only eligible for $10,000 in debt relief because he did not receive a Pell grant.

They argued that they could not voice their disagreement with the program's rules because the administration did not put it through a formal notice-and-comment rule making process under the Administrative Procedure Act.

"This ruling protects the rule of law which requires all Americans to have their voices heard by their federal government," said Elaine Parker, president of Job Creators Network Foundation, in a statement following the ruling on November 10.

Where do the other lawsuits stand?

Beyond the Texas case, the Biden administration is facing several other lawsuits over the student loan forgiveness program.

A lawsuit brought by six Republican-led states is pending at the 8th US Circuit Court of Appeals. On October 21, that appeals court put an administrative hold on the program, banning the administration from canceling any debt. The appeals court then granted a preliminary injunction request from the states on November 14. The injunction will "remain in effect until further order of this court or the Supreme Court of the United States," according to the order. The Department of Justice has asked the Supreme Court to vacate the injunction.

The states have argued that the Biden administration does not have the legal authority to grant broad student loan forgiveness, as well as that the program would hurt them financially for a variety of reasons. A lower court had dismissed the case, ruling that the states did not have legal standing to sue. The states immediately appealed to the 8th Circuit.

The Biden administration has had several wins in court thus far, as plaintiffs have struggled to show they have standing to sue.

One lawsuit, filed by a Wisconsin taxpayers group, was also dismissed by a trial-level federal judge, ruling that the group lacked standing to bring the challenge. The plaintiffs had argued that the loan forgiveness program, which is estimated to cost about $400 billion, would hurt taxpayers and the US Treasury. Supreme Court Justice Amy Coney Barrett also rejected the taxpayers group's request for the Supreme Court to intervene.

A separate case, which was also rejected by Barrett and dismissed by a lower court, was filed by a borrower who argued that the forthcoming loan forgiveness would leave him with a bigger state tax bill. Some states may tax the debt forgiveness, but it is not taxable on the federal level.

The Biden administration is also facing pending lawsuits from Arizona's GOP Attorney General Mark Brnovich and the Cato Institute, a libertarian think tank. Both lawsuits argue that the president does not have the legal authority to broadly cancel student loan debt.

Brnovich argues that the state has standing to sue because the student loan forgiveness program could reduce Arizona's tax revenue. The state code doesn't consider the loan forgiveness as taxable income.

The Arizona complaint also argues that the forgiveness policy will hurt the attorney general office's ability to recruit employees. Currently, its employees may be eligible for the federal Public Service Loan Forgiveness program, but some potential job candidates may not view that as a benefit if their student loan debt is already canceled, the lawsuit argues.

The Cato Institute makes a similar argument about the forgiveness program making it harder for it to recruit employees.

Who may be eligible for student loan forgiveness?

If Biden's program is allowed to move forward, individual borrowers who earned less than $125,000 in either 2020 or 2021 and married couples or heads of households who made less than $250,000 annually in those years could see up to $10,000 of their federal student loan debt forgiven.

If a qualifying borrower also received a federal Pell grant while enrolled in college, the individual is eligible for up to $20,000 of debt forgiveness.

But federal student loans that are guaranteed by the government but held by private lenders are not eligible unless the borrower applied to consolidate those loans into a Direct Loan before September 29.

This headline and story have been updated with additional information.