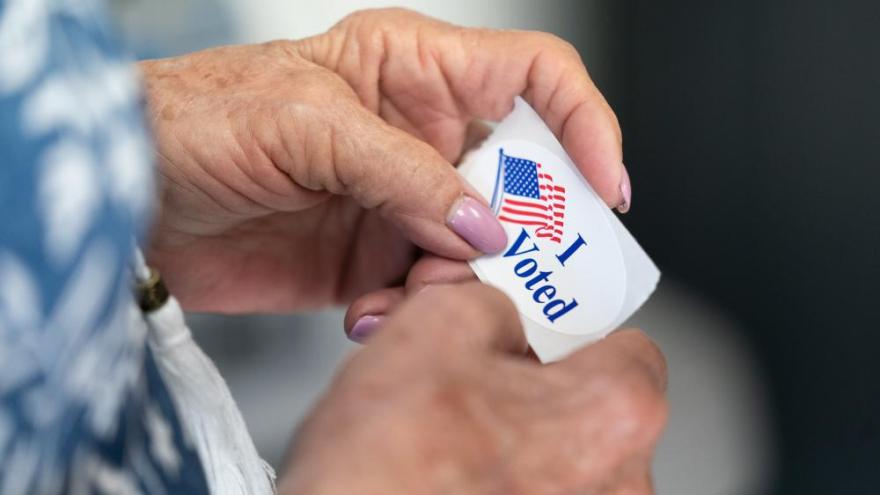 A poll worker holds a sticker that reads "I voted" on May 17 in Mt. Gilead, North Carolina. Americans head to the polls Tuesday for an election that has state and local officials across the country on edge as they brace for potential problems at the polls.

(CNN) -- State and local elections officials said Tuesday's voting in the midterm elections went smoothly overall, with a few isolated problems reported, including in the key swing state of Arizona where issues with voting machines sparked baseless claims about fraud.

In Maricopa County, Arizona's most populous, Republicans filed a lawsuit seeking to keep polls open three hours after they were scheduled to close, claiming there were excessive delays and long lines due to ballot tabulator malfunctions. A county judge, however, denied the request, saying that while some voters may have been confused or faced difficulties, he "does not have any evidence" voters were unable to vote.

Maricopa County officials said tabulators had tech issues in about 20% of its voting locations. Maricopa County chairman Bill Gates and recorder Stephen Richer advised voters experiencing issues to put their ballots inside a secure box attached to the tabulators and assured they would be counted by bipartisan vote counters after polls close.

"There was no one who came today with a valid ID who was turned away from the polls," Gates told reporters Tuesday afternoon. "Even when we had this [issue] and we hadn't figured out the solution, people were still able to vote. It was just a matter of maybe not voting in the way they wanted to."

But the tabulator problems were baselessly played up as signs of voter fraud in right-wing media, including by Donald Trump Jr., after a post showed an election worker in the Phoenix suburb of Anthem explaining the problem to voters.

Election officials have particularly faced newfound pressures from the conspiratorial right. Led by former President Donald Trump, a growing number of Republican politicians have attacked the legitimacy of the vote and repeated false claims that the 2020 election was stolen. On Tuesday, Trump and his allies were quick to launch similar baseless attacks.

"Same thing is happening with Voter Fraud as happened in 2020???" Trump wrote Tuesday afternoon on his Truth Social platform. Trump also amplified a false claim about voter fraud in Michigan through his social media.

In addition to the conspiracies about vote tabulators in Maricopa County, Charlie Kirk, the founder of right-wing group Turning Point USA, falsely tweeted there was a "2 hour wait minimum" at most polling places in the county. Maricopa County debunked the claim, and the county's online wait-time tracker showed dozens of polling locations had waits of under five minutes.

State and local officials and voting rights advocates have raised the alarm that the political attacks, including a marked rise in threats of violence against election workers, have sparked an exodus of local elections officials in charge of the vote.

Among the most serious issues was in a suburb of Milwaukee, where a 38-year-old man was arrested after threatening voters with a knife, briefly forcing one polling place to close.

The man demanded that staff "stop the voting," the West Bend Police Department said in a statement. He was arrested without incident and no injuries were reported, police said.

Despite these concerns, the vast majority of the tens of millions who cast ballots on Tuesday will do so without issue, in an election where early voting has been ahead of 2018 levels. Roughly 8 in 10 of voters in this year's midterms said they were at least somewhat confident that elections in their state are being conducted fairly and accurately, according to the preliminary national results of the exit poll conducted for CNN and other news networks by Edison Research.

While multiple states reported attempted cyberattacks on their websites on Election Day -- including a "sustained outage" of a website in Mississippi -- none of the hacks have prevented anyone from voting, federal officials told reporters Tuesday evening.

"What we are seeing are things that we usually see on Election Day," said Susannah Goodman, director of election security at Common Cause. "Sometimes voters are going in and one of the voting machines isn't working, or lines are a little longer."

Michigan Department of State spokesperson Jake Rollow said Tuesday that "things are going smoothly" with elections in the state. Pennsylvania's acting Democratic secretary of state, Leigh Chapman, said Tuesday that while it would take "a few days" for the state to finish counting its results, as expected, there were just "a handful of typical Election Day incidents," including a few polling places opening late, power outages and a gas leak.

"All were quickly handled," she said.

Cynthia Nogar, who voted for Democratic candidates in Rochester, Minnesota, told CNN her voting location at a local church was organized and went smoothly despite her own concerns.

"I couldn't help but be a little concerned about what might happen ... but it was just as quiet as usual," she said. "That was really nice. It was kind of a relief, you know?"

The vast majority of voting issues were decidedly minor and small scale, such as long lines, bad weather or tech glitches.

In a handful of counties across the country, there were problems that prompted precincts to stay open later.

Six precincts across Georgia were ordered to remain open later because they opened late Tuesday morning, according to Gabriel Sterling, Georgia's acting Deputy Secretary of State.

The North Carolina Board of Elections voted unanimously to allow three polling precincts to close an hour later in North Carolina after their opening was delayed.

And in Pennsylvania, approximately 44 polling places were impacted by a paper shortage in Luzerne County, prompting an extension of in-person voting, according to a spokesperson for the Pennsylvania Department of State.

Further, an extra verification process to ensure voters didn't vote both by mail and in person could delay counting ballots and getting election results in Philadelphia, a spokesperson for the Philadelphia City Commissioners told CNN on Tuesday.

In Florida's Palm Beach County, officials are vowing to keep their main elections office open "as long as we possibly can" to count ballots with Tropical Storm Nicole expected to make landfall late Wednesday night or early Thursday morning. The storm is currently expected to become a hurricane and remain a hurricane when it reaches Florida.

"At this point, we're thinking we can make it through without a big effect on the election," the county's Supervisor of Elections Wendy Sartory Link told CNN on Tuesday, while noting that worsening road conditions could cause some delays as officials retrieve ballot drop boxes.

In North Carolina, roughly 15 incidents of alleged intimidation have been reported to the state Board of Elections since the start of early in-person voting.

Incidents included some individuals outside of a county board of elections shooting video of an election worker's license plate and one situation where an election worker was followed from the voting site to the elections office and then followed to their neighborhood.

In Arizona, the secretary of state's office has sent 18 referrals to law enforcement related to drop-box intimidation, including a threatening message toward a government worker and several voters reporting being filmed at drop box locations in Maricopa County last week.

A federal judge earlier this month imposed new restrictions against a right-wing group in the state following complaints about aggressive patrols of ballot boxes in the state, including blocking the members from openly carrying guns or wearing body armor.

In Beaumont, Texas, a federal judge barred poll workers at an election site from engaging in conduct that Black voters said was intimidating.

US District Judge Michael J. Truncale issued the temporary restraining order Monday in a case brought by Beaumont's chapter of the NAACP, which alleged that White poll workers spoke aggressively to Black voters, hovered too close behind them while voting and declined to help them cast their ballots.

Federal officials have warned that domestic violent extremists pose a heightened threat to the 2022 midterms.