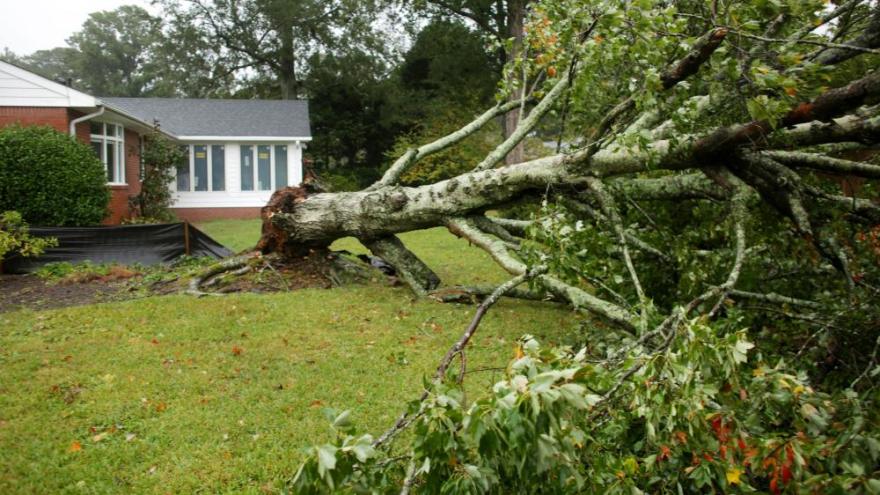 A tree is seen down in the Thoroughgood neighborhood of Virginia Beach during severe weather on Friday, Sept. 30.

(CNN) -- Virginia Beach was placed under a state of emergency Sunday night ahead of what's expected to be widespread coastal flooding due in part to the remnants of the post-tropical storm Ian.

A "significant multi-day coastal flood event" is expected to generate from a low-pressure system offshore merging with the remnants of Hurricane Ian to create a Nor'easter, the city said in a news release.

One of the highest tides in the past decade is possible for the southern Chesapeake Bay and the Atlantic Coast, according to a tweet from the National Weather Service in Wakefield, Virginia.

"Severe flooding will extend inland from the waterfront and shoreline flooding homes, businesses and isolating some neighborhoods. Numerous roads will be impassable under several feet of water and cars submerged. Some areas may need to be evacuated," according to the weather service.

The threat extends over a large area, with coastal flood warnings or advisories covering over 20 million people from Long Island to the North Carolina Outer Banks. Some locations around Hampton Roads and Virginia Beach could see extensive flooding and their highest water levels in five to 10 years, according to the weather service.

A dozen gauges are expected to reach a major flood stage at high tide Monday afternoon over coastal Virginia, Maryland and North Carolina. Water is expected to be 2 to 3 feet above ground level in some areas.

Wind advisories and heavy surf advisories are also in effect over much of region with wind gusts up to 50 mph, along with 8- to 12-foot waves battering the coast.

Virginia Beach Emergency Management Coordinator Danielle Progen warned in the release of the seriousness of the expected flooding.

"Forecasters expect inundation of up to three feet above ground which would make for some of the worst flooding conditions the area has seen in at least a decade," she said.

"With the ground saturation from Ian's rainfall, plus high tides, combined with wind-driven high water in the Chesapeake Bay and Lynnhaven River systems, it looks like there won't be anywhere for the water to drain," Progen said. "We're encouraging everyone to stay off the roads as much as possible Monday afternoon through Tuesday morning."

The peak flooding threat is expected with high tide this afternoon, but with the coastal low expected to linger, the threat for flooding will continue through Tuesday.

Rapid sea level rise — caused by the climate crisis and sinking land — is increasing the frequency and intensity of coastal flood events like the one Virginia Beach will experience Monday.

Sea level in the Virginia Beach area has climbed 10 inches in the last four decades alone which has made extreme flooding more frequent.

Since 1950, the Sewells Point tide station near Norfolk and Virginia Beach has recorded more than 200 days of flooding. More than half of those days would not have occurred if not for sea level rise, according to a study from Climate Central, a non-profit climate analysis service.

A separate report published earlier this year found sea level in the US will rise as much in the next 30 years as it did in the past 100 -- increasing the frequency of high-tide flooding, pushing storm surge to the extreme, and inundating vulnerable coastal infrastructure with saltwater.

The interagency report, led by the National Oceanic and Atmospheric Administration, shows how scientists are increasingly confident that US coasts will see another 10 to 12 inches of sea level rise by 2050.