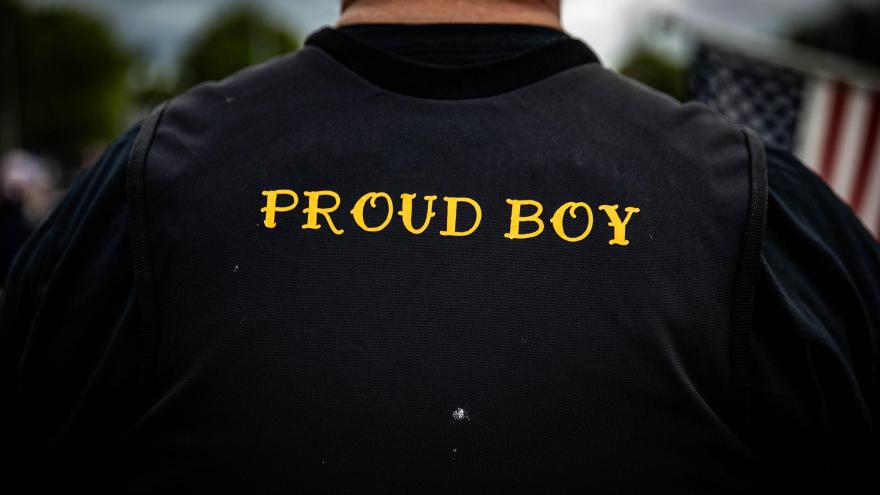 (CNN) -- Dozens of messages, social media posts and videos show that leaders of the far-right Proud Boys not only planned for the January 6, 2021, US Capitol attack but recruited others to help stop Joe Biden from becoming president, federal prosecutors said Thursday during opening statements in the seditious conspiracy trial.

"Let's bring this new year with one word in mind...revolt," defendant and then-Proud Boys chairman Enrique Tarrio wrote to others in the group on January 1, 2021, according to prosecutors. "New year's revolution."

Prosecutor Jason McCullough told the jury that Proud Boys leaders were afraid a Biden presidency would mean the end of the organization and that, after President Donald Trump infamously said in a presidential debate in 2020, to "stand back and stand by," the organization reached a turning point.

"In that moment, some battle lines were drawn. President Trump was for the proud boys, and Joe Biden was for antifa," McCullough said.

"The defendants' mission threatened the very foundations of our government," McCullough told the jury. "These five defendants had agreed -- by any means necessary including use of force -- to stop Congress" from certifying the election for Biden.

The defendants -- Tarrio, Joseph Biggs, Zachary Rehl, Dominic Pezzola and Ethan Nordean -- have all pleaded not guilty to charges, including seditious conspiracy, conspiracy to obstruct and obstructing an official proceeding.

According to McCullough, the five defendants planned to stop the transfer of power to Biden that day and communicated and organized through messaging apps. McCullough played video of several defendants allegedly tearing down police barricades, attacking officers and ultimately being the first to break into the Capitol, celebrating along the way.

"Victory smoke in the Capitol, boys," Pezzola, who prosecutors say was the first to break into the Capitol using a riot shield he stole from a police officer, said inside the building, according to a video shown in court. "This is f**king awesome. I knew we could take this mother**ker over [if we] just tried hard enough. Proud of your motherf**king boy."

"Don't f**king leave," Tarrio allegedly wrote in a public post during the riot.

Prosecutors played a video of Nordean allegedly celebrating the riot.

"I was part of f**king storming the Capitol of the most powerful country in the f**king world," Nordean said.

On January 7, Rehl allegedly wrote to other Proud Boys: "I'm proud as f**k at what we accomplished yesterday."

Openings will continue Thursday afternoon with statements from the defense.