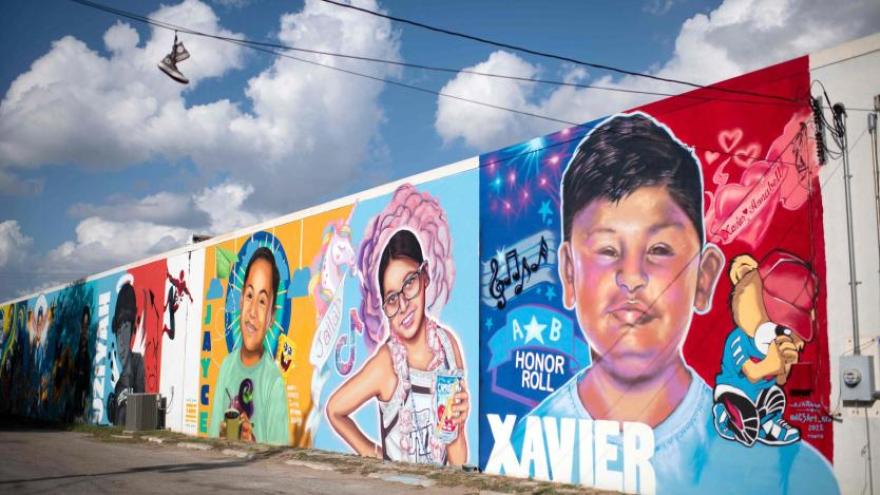 Uvalde now has murals to honor the students and teachers killed at Robb Elementary.

(CNN) -- Angry relatives of some of the children killed in the Robb Elementary School massacre are demanding that the acting police chief from that day, Lt. Mariano Pargas, quit his role as a Uvalde county commissioner.

"He was made aware that people were injured and dying and yet he did nothing. A young girl called 911 in room 112 asking for help and he simply left her and other people to die," said Jesse Rizzo, citing exclusive CNN reporting from this week, at a Uvalde County Commission meeting where families lined up to criticize Pargas.

Rizzo was addressing an empty chair, as Pargas did not turn up for the meeting.

While that upset some of the families of the bereaved, CNN's reporting this week recharged the opposition to his elected position and his continuing role in the Uvalde Police Department.

The City of Uvalde is calling a rare "special meeting" Saturday evening to determine Pargas' future with the police department, according to sources. Pargas is expected to be terminated during that meeting, if he hasn't been terminated by then, an Uvalde official tells CNN.

Uvalde Mayor Don McLaughlin told CNN on Tuesday he expected that Pargas, suspended with pay since July, would be gone from the police department by the end of the week.

But the families want more.

"Officer Pargas does not deserve to be on this commissioner's seat. I'm here to ask today that he does the right thing and steps down," said Berlinda Arreola, the grandmother of Amerie Jo Garza, who was killed at the age of 10.

"By him (not) showing up just proves my point. He was a coward that day and he's cowardly now, that he couldn't show face. He knew that we were going to be here today, and he made a wrong decision, again."

The gunman was inside the elementary school for 77 minutes, while hundreds of law enforcement officers gathered inside and outside the building, including leaders like Pargas, school police chief Pedro "Pete" Arredondo, Uvalde County Sheriff Ruben Nolasco, Texas Rangers, Border Patrol commanders and many members of the Texas Department of Public Safety.

While it was the middle of the day and school was in session, there was confusion about whether or not children were present and delays in rescuing students.

"You, sir, walked out on my daughter and the rest of her classmates," said Gladys Gonzales to the empty chair at the Wednesday county meeting. Her daughter Caitlyne hid in her classroom across the hallway as the gunman shot her friends.

Gonzales continued: "Mariano Pargas, you are not worthy of this title. I am not asking, I am demanding that you step down as county commissioner."

Pargas told CNN on Monday he could not speak to his role in the police department on the advice of his lawyers, even though he wished to defend what he did on May 24, the day of the massacre.

He has not responded to CNN's attempts to reach him since.