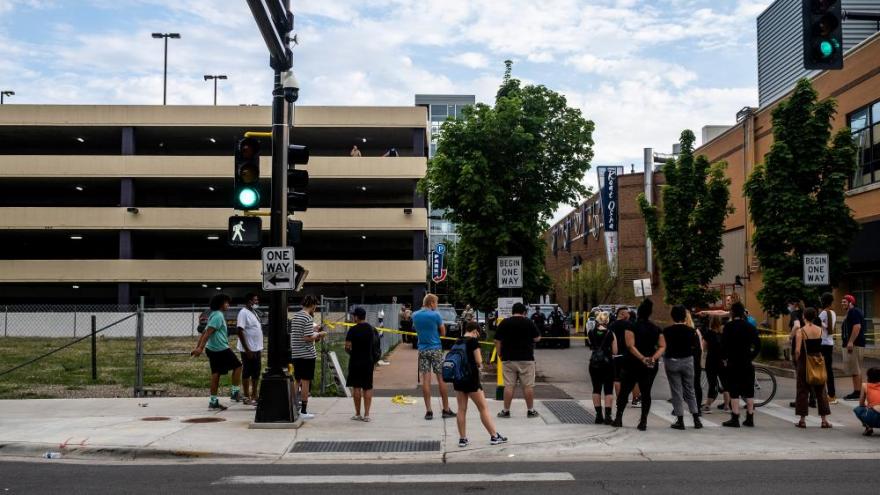 People gather outside a scene where a person was killed during an arrest attempt at a parking ramp on June 3 in Minneapolis.

(CNN) -- The agency investigating the fatal shooting of a suspect during an arrest attempt in Minneapolis Thursday says evidence shows "the man fired his weapon from inside the vehicle."

While trying to arrest a person wanted on a felony warrant in a parked car on Thursday afternoon, US Marshals task force members shot the suspect, who had "produced a handgun" and "failed to comply with officers' commands," the US Marshals Service said in a prepared statement obtained by CNN affiliate WCCO.

The man was pronounced dead at the scene. A 27-year-old woman who was a passenger in the car sustained minor injuries from glass debris, authorities said.

"BCA crime scene personnel recovered a handgun as well as spent cartridge cases from inside the driver's compartment," the Minnesota Department of Public Safety Bureau of Criminal Apprehension (BCA) said in a statement.

The Hennepin County Medical Examiner's Office will identify him "once the preliminary autopsy, formal identification and family notifications have taken place," the BCA said.

The suspect had been wanted on a state arrest warrant for possession of a firearm by a felon, according to the Marshals Service.

There is no body camera or squad car camera footage of the shooting, which is in the early stages of investigation, the BCA said.

"The Marshal Service currently does not allow the use of body cameras for officers serving on its North Star Fugitive Task Force," the BCA statement said.

Upon completion of the investigation, the BCA said it "will provide its findings without recommendation to the appropriate prosecutor for review."

Brother of slain man calls for release of videos

The family of the man who was shot and killed called for justice during a Friday afternoon press conference.

Kidale Smith told reporters his brother Winston Smith was the man killed by the US Marshals task force Thursday night.

CNN has reached out to the Hennepin County Medical Examiner's Office, US Marshals, the Minneapolis Police Department and the Minnesota Bureau of Criminal Apprehension (BCA) regarding the identity.

Kidale Smith said that law enforcement has not reached out to him following his brother's death and he learned of the shooting last night from a family member.

"I got a call from my stepbrother saying that the man that got shot was my brother," Kidale Smith said.

"I'm here to speak up on the fact that there needs to be something done about this," he said. "This man had a family, he's just like anybody else."

He's called for law enforcement to release any and all footage of the incident, as well as name those involved.

"I want body camera footage," Smith said, adding that he is particularly interested in footage from a camera on the fifth floor of the parking garage where his brother was shot and killed.

Waylan Hughes, a family friend who said he's known Winston Smith for over 10 years, also called for any and all video to be released in the case.

"We want to see all the security surveillance in the area," Hughes said. "We need justice. We want those cops to go to jail. They wrongly shot him."

"He only had a warrant out for his arrest. He wasn't even a bad person," Hughes added.

A warrant was issued for Winston Smith in late May after he failed to appear at a hearing after pleading guilty to a possession of a firearm charge in Ramsey County. Smith first appeared in court on the charge in December 2019, a court docket shows.

In November 2020, on the eve of trial, he pleaded guilty to a single charge of possession of a firearm in a plea agreement, according to the docket. On May 19, 2021, a warrant was issued for failure to appear at a hearing in the case and he was ordered to be held without bond or bail, the docket shows.

Hughes said that Winston Smith had three children, two girls and one boy.

"He was a comedian. He was a funny guy," Hughes said, adding that Smith used to make skits and comedy videos.

"He was not out to get nobody," Hughes told reporters.

The shooting led to protests in Minneapolis' Uptown area during the evening and overnight.

People began gathering at the scene to watch investigators, and some people began chanting "insults at Minneapolis police, whose officers were providing perimeter support," the Star Tribune reported.

Most dispersed by early evening, but a crowd returned after 9:15 p.m., not long after investigators left, WCCO reported. People dragged a trash container into an intersection and set it on fire, and pulled down crime scene tape, according to WCCO.

Video from the station shows exterior glass broken at a nearby CVS store Thursday night.

Buildings were looted and damaged, Minneapolis police said early Friday in a brief advisory, without elaborating.

Gov. Tim Walz said Friday that while tensions are high local jurisdictions are in charge and resources from the National Guard are not necessary to deploy at this time.

The law enforcement shooting comes as the city grapples with last year's killing of George Floyd during his arrest in Minneapolis last year, and with the murder conviction in that case of former police officer Derek Chauvin.

On Thursday, Minneapolis city workers removed parts of a memorial at the intersection where Floyd took his final breaths, as the city stated its plans to create a permanent memorial and reopen the area to through-traffic.

The intersection where Floyd died -- Chicago Avenue and 38th Street -- is about a 3-mile drive southeast of where Thursday's shooting happened.

Shortly after the removal of the Floyd memorial, some activists blocked the intersection.

At a press conference, Mayor Jacob Frey said the city workers' efforts were just the first step in a "phased reconnection" of the Chicago Avenue/38th Street intersection, and he acknowledged that it will be some time before the intersection is open to traffic for good.