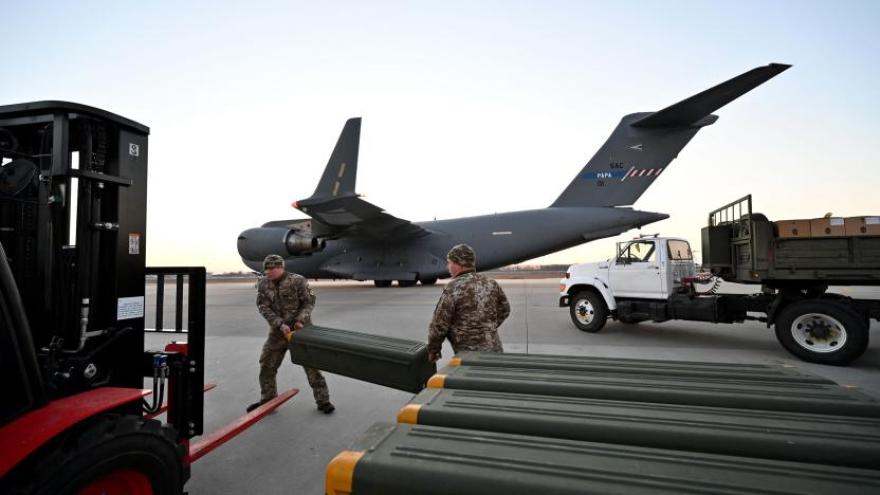 Servicemen of Ukrainian Military Forces move US-made FIM-92 Stinger missiles and the other military assistance in Kyiv on February 13.

(CNN) -- As the first full winter of Russia's war with Ukraine sets in, the US is running low on some high-end weapons systems and ammunition available to transfer to Kyiv, three US officials with direct knowledge tell CNN.

The strain on weapons stockpiles -- and the ability of the US industrial base to keep up with demand -- is one of the key challenges facing the Biden administration as the US continues to send billions of dollars of weapons to Ukraine to support its fight against Russia. One of the officials said the stockpiles of certain systems are "dwindling" after nearly nine months of sending supplies to Kyiv during the high-intensity war, as there's "finite amount" of excess stocks which the US has available to send.

Among the weapons systems where there's particular concern about US stockpiles meeting Ukrainian demands are 155mm artillery ammunition and Stinger anti-aircraft shoulder-fired missiles, the sources said.

Some sources also raised concerns about US production of additional weapons systems, including HARMs anti-radiation missiles, GMLRS surface-to-surface missiles and the portable Javelin anti-tank missiles -- although the US has moved to ramp up production for those and other systems.

For the first time in two decades, the US is not directly involved in a conflict after withdrawing from Afghanistan and transitioning to an advisory role in Iraq. Without the need to produce weapons and ammunition for a war, the US has not manufactured the quantities of materiel needed to sustain an enduring, high-intensity conflict.

Defense officials say the crunch is not affecting US readiness, as the weapons sent to Ukraine don't come out of what the US keeps for its own contingencies.

But the seriousness of the problem is a source of debate within the Defense Department, officials say. While the US will not be able to provide high-end munitions to Ukraine indefinitely, assessing whether the US is "running low" on stockpiles is subjective, one senior defense official said, as it depends on how much risk the Pentagon is willing to take on.

Multiple officials underscored that the US would never put at risk its own readiness, and every shipment is measured against its impact on US strategic reserves and war plans. Both Defense Secretary Lloyd Austin and Chairman of the Joint Chiefs of Staff Gen. Mark Milley monitor levels of US stockpiles closely, officials said.

One reason for the concern about low stockpiles is that the US industrial base is having difficulty keeping up with demand quickly enough, the sources said. In addition, European allies cannot sufficiently backfill Ukrainian military requests due to their need to maintain to their own forces' supplies.

"It's getting harder and harder," Rep. Mike Quigley, a member of the House Intelligence Committee, told CNN. "This is a war we thought would be over in days but now could be years. At a time when global supply chains are melting down, the West is going to have a very difficult time to meet demands at this very high level."

Pentagon Press Secretary Brig. Gen. Patrick Ryder told CNN that the US will continue to support Ukraine "as long as it takes," while adding that no weapons transfers to Ukraine have diminished US military readiness.

At a press conference Wednesday following a meeting of the Ukraine Defense Contact Group, Austin touted the commitments of a half-dozen countries providing additional weapons to Ukraine, including Greece pledging more 155mm ammunition.

"All Ukraine is asking for is the means to fight, and we are determined to provide that means. Ukrainians will do this on their timeline, and until then, we will continue to support all the way for as long as it takes," Milley said at the press conference. "It is evident to me and the contact group today that that is not only a US position, but it is a position of all the nations that were there today. We will be there for as long as it takes to keep Ukraine free."

The degree to which weapons stockpiles are running low varies system by system, as the US defense industrial base is better equipped to ramp up production of some weapons, while others are more difficult -- or the production line has been shut down altogether and can't be easily resumed.

"In most instances, the amounts given to Ukraine are relatively small compared to US inventories and production capabilities. However, some US inventories are reaching the minimum levels needed for war plans and training," Mark Cancian, a senior adviser at the Center for Strategic and International Studies, wrote in a September article. "The key judgment for both munitions and weapons is how much risk the United States is willing to accept."

The Pentagon said in a September fact sheet it had committed more than 806,000 155mm artillery rounds to Ukraine, for instance. Cancian wrote that ammunition for the 155mm howitzers was "probably close to the limit that the United States is willing to give without risk to its own warfighting capabilities." At the same time, he wrote that a dozen other countries could supply the same ammunition, and Ukraine was unlikely to be constrained in what it needed thanks to the global market.

'No question' there is pressure on stockpiles

Colin Kahl, the Pentagon's undersecretary for policy, told reporters in a recent roundtable, "there's no question" the weapons pipeline to Ukraine has put pressure on the stockpiles and industrial base of the US as well as its allies.

"Look, we're seeing the first example in many decades of a real high intensity conventional conflict and the strain that that produces on not just the countries involved but the defense industrial bases of those supporting, in this case supporting Ukraine," Kahl said. "I will say Secretary (Lloyd) Austin has been laser-focused since the beginning in making sure that we were not taking undue risk. That is that we weren't drawing down our stockpiles so much that it would undermine our readiness and our ability to respond to another major contingency elsewhere in the world."

Kahl added that the support the US has provided to Ukraine has not put the US military "in a dangerous position as it relates to another major contingency somewhere in the world," but he said it has revealed there's more work to do to make sure the US defense industrial base is more nimble and responsive.

The questions about weapons stockpiles comes as Congress is finalizing the Pentagon budget for the current fiscal year through the annual National Defense Authorization Act as well as the government spending package Congress is expected to try to pass before government funding expires on December 16.

The US military often turns to Congress for a funding boost -- lawmakers have routinely added billions to the Pentagon's budget requests in annual spending bills.

The Biden administration on Tuesday sent a letter to Congress seeking an additional $37.7 billion in funding for Ukraine. The funding includes $21.7 for the Pentagon to be spent in part to address weapons shortages, according to a White House fact sheet that says the money the Defense Department spending is for "equipment for Ukraine, replenishment of Department of Defense stocks, and for continued military, intelligence and other defense support."

The $37.7 billion request comes as Republicans are projected to reclaim the House majority in the next Congress, which could make it more difficult for the Biden administration to authorize funding to Ukraine next year. House GOP Leader Kevin McCarthy has said Republicans won't give Ukraine "a blank check" -- though he also clarified to his conference's foreign policy hawks that he supports continuing to fund Ukraine's war -- and there are numerous Republicans pushing for a significant curtailing of US aid to Ukraine.