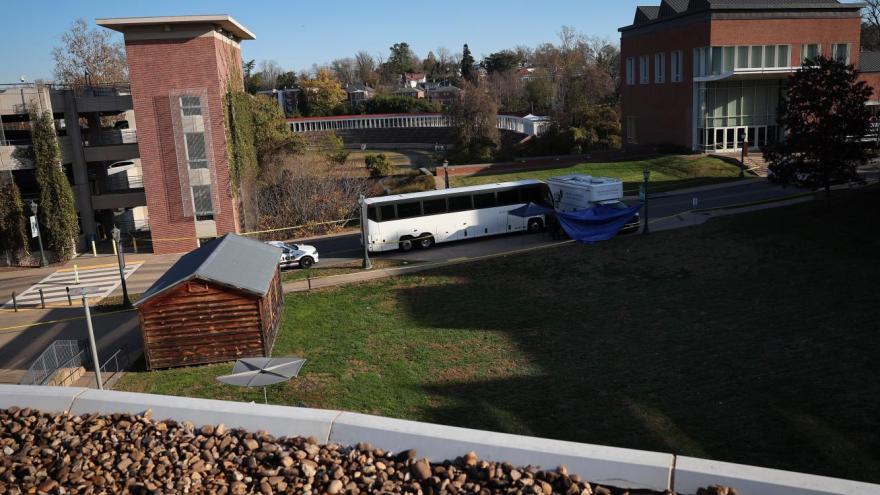 The crime scene where three people were killed and two others wounded is shown on the grounds of the University of Virginia Monday in Charlottesville.

(CNN) -- The suspected gunman in Sunday's shooting at the University of Virginia -- killing three students and wounding two others -- legally purchased firearms on two separate occasions after being prevented from doing so years earlier, according to the gun shop that made the sales.

Suspect Christopher Darnell Jones Jr., 22, attempted to buy a firearm in 2018 and 2021, but neither of the sales or transfers were completed, Dance's Sporting Goods owner Marlon Dance told CNN.

Jones was under the legal purchasing age of 21 to buy a handgun in 2018 and failed a background check trying to buy a rifle in 2021 due to a pending criminal charge. "Jones DID NOT receive either of the firearms he attempted to purchase, and both attempted purchases were forwarded to the Virginia State Police for further action," Dance said in a statement.

The suspect was able to purchase a rifle in February and a 9mm pistol in July, according to the statement, and there was "nothing noteworthy" about the 2022 purchases.

The circumstances behind the shooting that has shattered the Charlottesville community and taken the lives of three Virginia Cavaliers football players remains under police investigation.

Devin Chandler, Lavel Davis Jr. and D'Sean Perry were on a field trip with Jones -- a one-time UVA football player in 2018 -- and other students to see a play in Washington, DC, according to a university spokesperson.

When the bus returned to UVA's main campus in Charlottesville Sunday night, Jones allegedly opened fire, killing the three and wounding two others, identified by authorities as Michael Hollins and Marlee Morgan.

Hollins, a running back for the Cavaliers, has undergone two successful surgeries, his family said in a statement Wednesday.

Without specifying which individual, UVA Health spokesperson Eric Swensen said Wednesday that one person wounded is in fair condition while another had been released from medical care. CNN has reached out to Morgan's family for comment.

It is unclear whether either of the weapons purchased by Jones this year were used in Sunday's shooting, but police confirmed that a prior hold on his ability to buy firearms due to an ongoing legal matter in 2021 was dropped.

A pending charge Jones faced "was reduced to a misdemeanor by the court in October 2021, thereby removing the prohibition against future purchases," Virginia State Police spokesperson Corinne Geller said in a statement.

Jones was also the subject of a gun-related probe by the university's judicial council prior to the shooting, in which a student reported Jones "made a comment to him about possessing a gun," according to university spokesperson Brian Coy. Jones "repeatedly refused to cooperate with University officials" and his case was escalated for further review and possible disciplinary action, Coy said.

In Sunday's shooting, Jones faces three charges of second-degree murder and three counts of using a handgun in the commission of a felony, UVA Police Chief Timothy Longo Sr. said. He also faces two counts of malicious wounding, each accompanied by a firearm charge.

Jones' first court appearance Wednesday resulted in him being held without bond, the court ordered. He remains in custody in Albemarle-Charlottesville Regional Jail, online records show, and his next court hearing will be in December, according to Albemarle County Commonwealth's attorney Jim Hingeley.

How the shooting started

Student Ryan Lynch told CNN affiliate KYW-TV she was on the bus where the shooting took place and saw Jones push one of the victims.

"Chris got up and pushed Lavel," Lynch said. "After he pushed him, he was like 'You guys are always messing with me.' Said something weird like that, but it was very bizarre because they didn't talk to him the whole trip."

"They just kept coming, more and more gunshots," she said. "We thought he was going to shoot everyone on the bus."

But "the shooter just kind of walked or, like, skipped off the bus," Lynch said.

According to Hingeley at Wednesday's court appearance, a witness to the shooting said Devin Chandler, one of the three killed, was shot while sleeping.

After a campus lockdown and manhunt for the suspected shooter, Jones was spotted driving a vehicle and apprehended by police Monday about 80 miles east of Charlottesville in Henrico County.

Loss of 3 killed felt by many

Students, faculty and the community at large gathered Monday night at a candlelight vigil on campus on commemorate the lives of Perry, Davis and Chandler.

"We are all fortunate to have them be a part of our lives," Cavaliers head coach Tony Elliott said of the three. "They touched us, inspired us and worked incredibly hard as representatives of our program, university and community."

Davis was described as a gentle giant whose smile would light up the room, Elliott said at a news conference Tuesday. It resonated "how much he loved his teammates and would do anything for his teammates," Elliott added.

Perry was "a delightful, respectful, hardworking person who was one of the best overall young men our community's had to offer," said his high school football coach, Earl Sims, Jr., who described Perry on Wednesday as "like a son."

Perry's family in a statement said he "made his family proud" through his faith and good deeds.

"Football and art was his passion, but the love that he had for his family, friends and his community was proven time and time again through his candid dedication. We truly appreciate the outpouring of love and support from so many people. We continue to keep the families of the other victims of this senseless tragedy in our prayers," they said.

Adam Sykes, Chandler's former high school coach, said Chandler "just wanted to make those around him as happy as he was" and often put others first.

"Even during his junior year when his dad passed away in the middle of the season, he came to me and said, 'Coach, I want to play this week. My dad would want me to play this week.' That was his character: always thinking of others," Sykes said.

The Cavaliers' upcoming game Saturday against Coastal Carolina has been canceled. A memorial service at John Paul Jones Arena in Charlottesville will be held Saturday afternoon.