Two officers survived a tornado that battered their patrol cars. They escaped and saved an injured girl 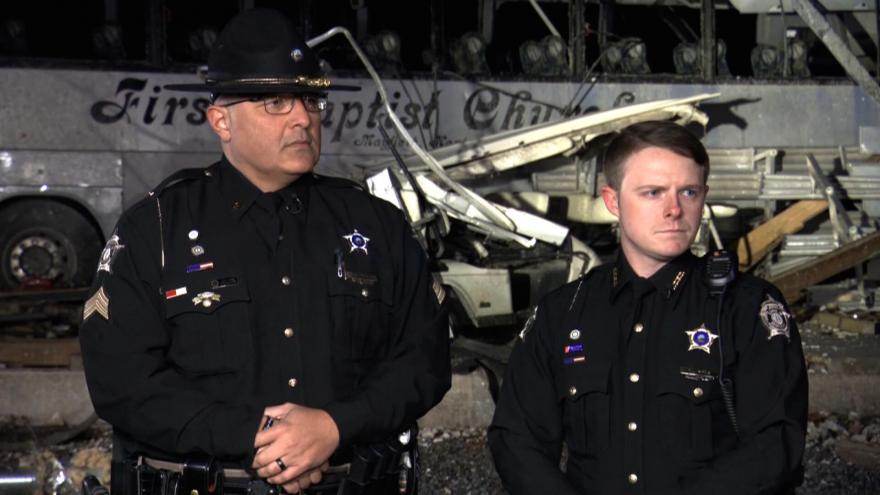 (CNN) -- Two officers were caught in a deadly tornado that ripped through a Kentucky community and -- after surviving a beating from Mother Nature -- rescued a severely injured young girl by carrying her out of harm's way on an old door.

Graves County Sheriff's Deputy Chandler Siris and Sgt. Richard Edwards were trying to position themselves where they expected the storm to come through in Mayfield. Before they knew it, the tornado was on top of them.

Debris was flying everywhere, beating on their patrol cars and making it difficult to do anything but hunker down and ride it out.

The tornado was part of a line of severe weather that moved through the central and southern part of the US late Friday into Saturday, leaving at least 100 people feared dead, including at least 74 in Kentucky, according to state and local officials.

"As the wind picked up and it picked my vehicle and turned it sideways I was trying to back up," Edwards told CNN's John Berman on Monday. "He (Siris) was behind me and we just couldn't do anything. We just sat there. We tried to duck down and just hold on."

"There was some fiberglass that went through my my passenger side window that hit me and there was about an 8-foot piece of wood that came through the back of my car and pierced it," Siris said.

After riding out the chaos, both deputies left their cars and ran to the nearest house for shelter. That's when they heard people yelling for help, said Edwards.

The pair ran back to one of their patrol cars, grabbed "go bags" with tourniquets in them, and ran back toward the home, being careful to run through the fields because downed transformer lines filled the roads.

"It was instantaneous," Siris said. "As soon as we got out of our cars, we knew somebody needed help and so we went to them."

Another deputy met them on the scene and that's when they saw a girl "very profusely bleeding," Edwards said.

"She was going into shock," he said. "We applied the tourniquet. We called for medics, (but) there's no way they could have got to us so we went outside and found an old interior panel door and we used that as a backboard. We loaded her up."

Siris and Edwards loaded the girl into the back of the third officer's car and he took her to a nearby hospital.

Edwards doesn't have an update on her condition but said that the last heard she was going to survive. "It was very life-threatening; she had lost a lot of blood; and she was going into shock," he said.

The widespread storm system spawned at least 50 tornadoes across eight states, according to the National Weather Service's Storm Prediction Center.

In the small Kentucky town of Dawson Springs, about 70 miles from Mayfield, about 75% of the community was wiped out and replaced by "chaos," Mayor Chris Smiley said Sunday.