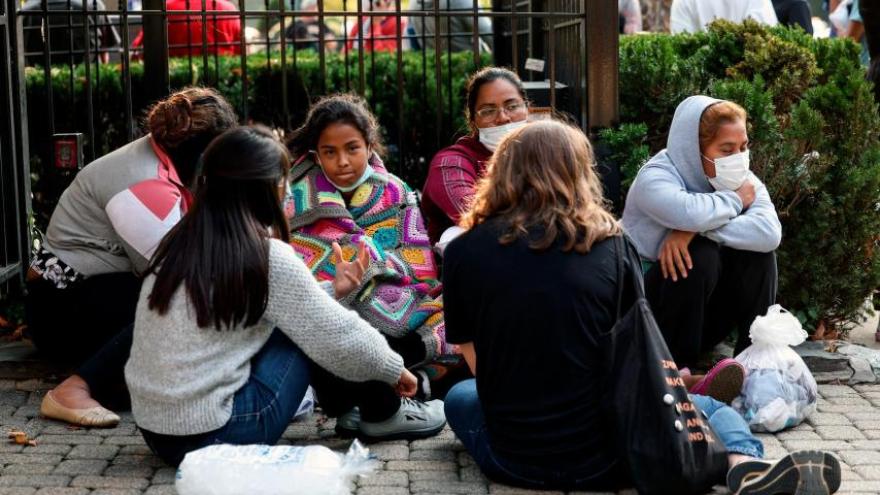 Migrants from Central and South America wait near the residence of Vice President Kamala Harris after being dropped off September 15 in Washington.

(CNN) -- Texas' governor says his state intentionally sent two buses of migrants to Vice President Kamala Harris' residence in the nation's capital -- resulting in a Thursday morning arrival that surprised volunteers who said they weren't prepared to receive them at that site.

The drop-off temporarily left dozens of migrants -- some of them carrying belongings in trash bags -- standing on sidewalks and grass Thursday morning outside the gated US Naval Observatory in Washington while volunteers scrambled to make arrangements for them.

"VP Harris claims our border is 'secure' & denies the crisis," Abbott tweeted. "We're sending migrants to her backyard to call on the Biden Administration to do its job & secure the border."

Since Abbott started sending buses of migrants to Washington in April, those buses usually have stopped around Union Station, and volunteers were prepared to receive two buses Thursday at the station, they said.

But Thursday's buses stopped instead at the Naval Observatory, some four miles away.

SAMU First Response, one of the groups helping migrants in Washington, was not provided a heads up, according to the group's managing director, Tatiana Laborde.

"By the time our team got to the migrants, they were very lost," Laborde told CNN late Thursday morning. "(The migrants) didn't understand where they were standing -- this is a very residential area."

Thursday's passengers included families and young men. Around 70% to 80% of the migrants are from Venezuela, according to volunteers.

The migrants eventually were moved to a local church as they figured out where to go next. Some are trying to go to other places in the US, such as New York and Chicago, volunteers said.

Volunteers late Thursday morning were coordinating with other agencies to have them received elsewhere, and "we're expecting that about half of those in the bus today are going to be on their way later this afternoon," Laborde said.

Migrants are welcome in Washington but "the lack of collaboration" from Texas makes logistics difficult, Laborde said.

"Yes, we are receiving them, but what happened this morning and them being left in the middle of the sidewalk without coordination is what makes this job extremely challenging," Laborde said.

The leader of a civil rights organization working with Hispanic Americans also blasted Abbott for the busing on Thursday.

"They were just literally dumped like human garbage in front of the vice president's house. That's un-Christian un-Texan, un-American, and something that should not be allowed," Domingo Garcia, national president of the League of United Latin American Citizens, told reporters Thursday afternoon outside Harris' residence.

Garcia said the volunteer-based organization will be going to Eagle Pass and Del Rio to stop the buses "before they leave" by putting people in front of the vehicles and "advising these immigrants of their legal rights so they are not used as political pawns." That campaign will likely start "in the next week," he said.

It wasn't immediately clear whether Harris was at the residence when the migrants were dropped off. She had a morning event scheduled at the White House, roughly a 2.5-mile drive away.

DC mayor declared an emergency over arrivals this month

After Texas started busing migrants to the nation's capital Arizona followed suit -- and the two states have since sent thousands of migrants to Washington. Abbott has expanded Texas' effort to include New York City and Chicago.

Abbott indicated Thursday he would not back down.

"Texas will continue sending migrants to sanctuary cities like Washington, DC" until Biden and Harris "step up and do their jobs to secure the border," Abbott said in a news release.

Texas' "busing strategy" has sent more than 10,000 migrants to Washington, New York and Chicago since the spring, the release reads.

US grapples with uptick in Venezuelan migrants

Migrants who are released from government custody are allowed to move about the United States as they go through their immigration proceedings. The US has been grappling with an uptick of Venezuelan migrants who have fled a deteriorating situation in that country in large numbers.

Frosty relations between the US and Venezuela keeps the US from deporting certain people. Many Venezuelan migrants are also seeking asylum upon arriving in the US.

Two medical situations involving Thursday's passengers were reported: a diabetic who had not refrigerated his insulin in at least 40 hours, and a person with a rash believed to have come from crossing the Rio Grande, which separates Texas and Mexico, volunteers said.

Correction: An earlier version of this story misspelled the last name of Washington Mayor Muriel Bowser.