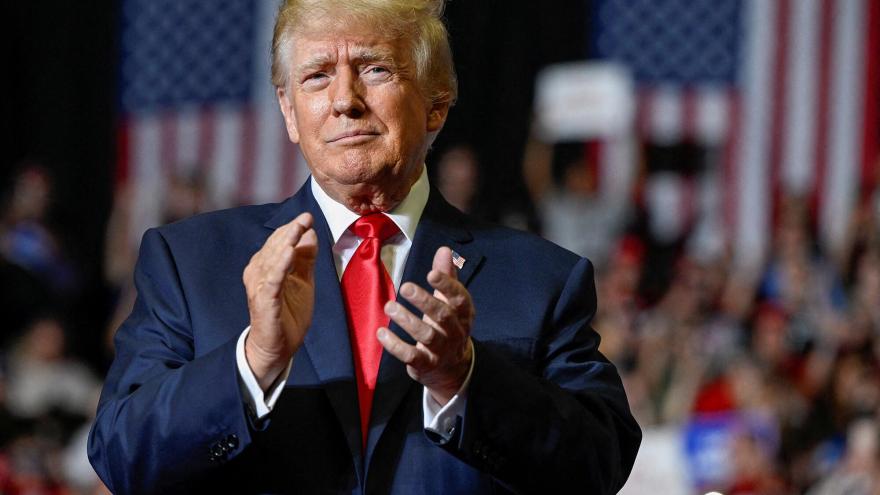 Former President Donald Trump, seen here in Youngstown, Ohio on September 17, is pushing back against a plan that would require Trump to declare in court whether the Justice Department's inventory from the search is accurate.

(CNN) -- Former President Donald Trump is pushing back against a plan from the special master overseeing the review of documents seized from Mar-a-Lago that would require Trump to declare in court whether the Justice Department's inventory from the search is accurate.

The requested declaration would force the former President to go on the record in court about his suggestion that the FBI may have planted evidence during the search on August 8.

Trump's objection to the request for the declaration was made public Wednesday night in a court filing from his lawyers, after the Justice Department discussed his opposition vaguely in a public submission to US District Judge Raymond Dearie, who is serving as special master, Tuesday evening.

Trump's team argued the court order appointing Dearie made mention only of a declaration from a government official verifying the Justice Department's search inventory, and that there was no such reference to a declaration from the Trump side. In the newly-public filing, which was a letter sent privately to Dearie Sunday, Trump said he had to object to the requirement "because the Special Master's case management plan exceeds the grant of authority from the District Court on this issue."

"Additionally, the Plaintiff currently has no means of accessing the documents bearing classification markings, which would be necessary to complete any such certification by September 30, the currently proposed date of completion," Trump said.

The former President's team also claimed that Dearie is exceeding his authority by asking that the documents from the search be logged in categories more specific than what US District Judge Aileen Cannon, who granted Trump's request for the review, contemplated in her appointment order.

Trump expressed his opposition as well to providing a briefing to Dearie on whether certain legal motions related to the search were best left to the magistrate judge who approved the warrant.

The Sunday objection letter to Dearie was made public with a Wednesday submission from the Trump team, in which they told the special master that documents from the search amount to 200,000 pages of material. The amount of material seized has not grown significantly since prosecutors first worked through it on the day of the search -- but the Trump team, now grasping the number of pages within each document, is alarmed at how quickly they'll have to work through the collection.

The Trump team wants extra time to work through the large volume of documents -- after they had been characterized earlier as 11,000 items or documents by the Justice Department, three of Trump's lawyers wrote in a letter to Dearie on Wednesday.

The Justice Department is investigating whether a crime was committed or the nation's security was harmed because Trump and others had federal and classified government records among the hundreds of thousands of unsecured pages at the Florida beach club after he left the presidency.

In recent days, the special master process has prompted the Trump team and the Justice Department to try to hire a service that can host the documents digitally, so they can be worked through. Earlier this week, the department said in a court filing that Trump's team had indicated the data hosting companies didn't want to work with the former President.

His team now says the issue is the size of the evidence collection.

"In conversations between Plaintiff's counsel and the Government regarding a data vendor, the Government mentioned that the 11,000 documents contain closer to 200,000 pages. That estimated volume, with a need to operate under the accelerated timeframes supported by the Government, is the reason why so many of the Government's selected vendors have declined the potential engagement," Trump's team wrote on Wednesday.

Trump, in his Wednesday letter to Dearie, also complained that attorneys working on the investigation may have been exposed to a small number of confidential attorney-client communications before either the department's filter team or the special master could review.