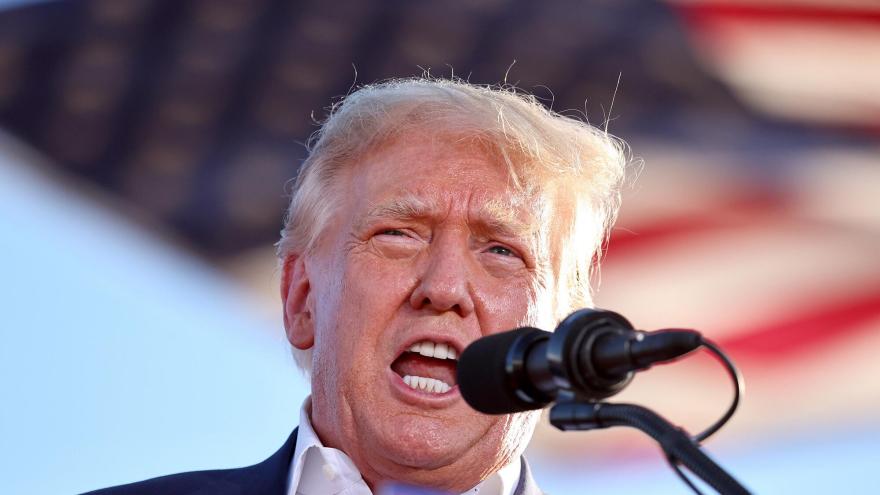 On October 14, former President Donald Trump does not say whether he will comply with the subpoena by the House select committee investigating the January 6, 2021, Capitol Hill insurrection. Trump is seen here in Arizona on October 9.

(CNN) -- Former President Donald Trump on Friday does not say whether he will comply with the subpoena by the House select committee investigating the January 6, 2021, Capitol Hill insurrection, in a lengthy response to the committee posted on Truth Social.

In a letter addressed to committee chairman Democratic Rep. Bennie Thompson of Mississippi, the former President doubles down on fraudulent claims that the 2020 election was stolen and insists the committee should have instead looked into these claims.

At what is expected to be the final public hearing before the midterms, the House select committee voted to subpoena Trump on Thursday.

CNN reached out to representatives for Trump for an answer on whether he'll comply with the subpoena.

CNN also has reached out to the committee for response to Trump's comments.

Trump lays blame on DC Mayor Muriel Bowser and House Speaker Nancy Pelosi for not utilizing the National Guard. As CNN has previously reported, the speaker of the House is not in charge of Capitol security. That's the responsibility of the Capitol Police Board, which oversees the US Capitol Police and approves requests for National Guard assistance.

The former President also provided a series of attachments to the response -- including aerial photos of the crowds at the rally on January 6, 2021, and a list of alleged election issues in various states.

New exclusive footage from January 6 that was provided to CNN shows Pelosi and other bipartisan lawmakers scrambling to have the National Guard activated as rioters attack the Capitol.

One of Trump's former acting chiefs of staff, Mick Mulvaney told CNN's "New Day" on Friday that he doubted Trump would comply with the subpoena.

"I don't think there's any chance he's actually going to do that," Mulvaney told CNN's Brianna Keilar. "Is he, is he thinking about it? Sure. That's his nature. Does he want to tell his side of the story? He does. There's no way that he's actually going to testify. This is not -- keep in mind, this is a legislative process. This is Congress. This is not the Department of Justice."