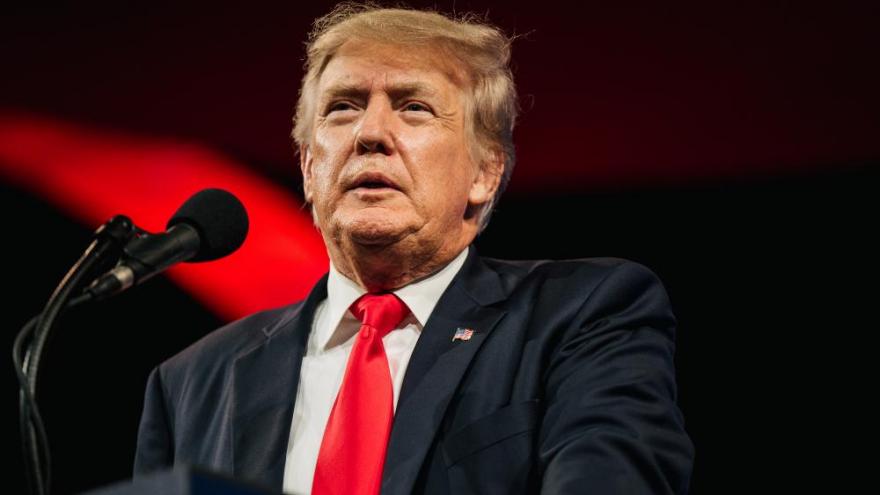 Former President Donald Trump, pictured here on July 11, 2021 in Dallas, Texas abruptly canceled a news conference that he was scheduled to host at Mar-a-Lago on the anniversary of the January 6 insurrection.

(CNN) -- Former President Donald Trump abruptly canceled a news conference late Tuesday that he was scheduled to host at Mar-a-Lago on the anniversary of the January 6 insurrection, but which his allies had warned would cause unnecessary problems for Republicans and himself.

In a statement released late Tuesday afternoon, the former President confirmed that he would no longer be hosting the news conference at his oceanfront club and would instead air his grievances at an upcoming campaign-style rally in Arizona. Previewing those complaints, Trump blasted the House panel that is currently investigating the events leading up to the deadly January 6 riot in Washington and accused the news media of assisting congressional Democrats on the panel with "the Crime of the Century."

"This is the Democrats' Great Cover-Up Committee and the Media is complicit," Trump said.

A person familiar with the situation told CNN that Trump decided to call off the event due to the news media's apparent lack of interest in covering it live on Thursday. Had the former President gone through with the news conference, he would have been competing with a series of somber tributes organized by congressional Democrats at the US Capitol. President Joe Biden and Vice President Kamala Harris are also slated to deliver remarks on Thursday.

The same source said Trump slowly realized that most, if not all, of the major news networks were not going to carry his press conference live or send their top reporters to Palm Beach to cover it.

The former President was also facing pressure from outside advisers and Republican lawmakers to cancel the news conference and instead keep a low profile on Thursday.

"A lot of the feedback he got was negative," said the person familiar with the situation, who added that some Trump allies told the former President that his news conference would divert attention "away from Democrats at a time when their party is becoming really unpopular with Americans."

"I think he realized this is the kind of thing that works better at a rally with his supporters," this person said.

A Trump spokesman did not respond to a request for comment.

Trump reportedly floated the idea of canceling the press conference, which had left Republicans fearful of what he might say, during a golf outing with South Carolina Sen. Lindsey Graham last weekend. Graham, who maintains a close relationship with the former President, told the Wall Street Journal that he urged Trump to proceed with a cancellation because "the upside of a news conference is pretty small."

"It will be an event that won't penetrate the way you would like and focus on election reform. With every passing day your hand gets stronger," he recalled telling Trump.

Much of the material collected by the committee so far has shed new light on how the former president conducted himself behind the scenes on January 6, while the riots were unfolding at the Capitol, and the lengths to which top Trump allies and members of his own family went to get him to publicly condemn the violent demonstrators and shift his focus away from the 2020 election.