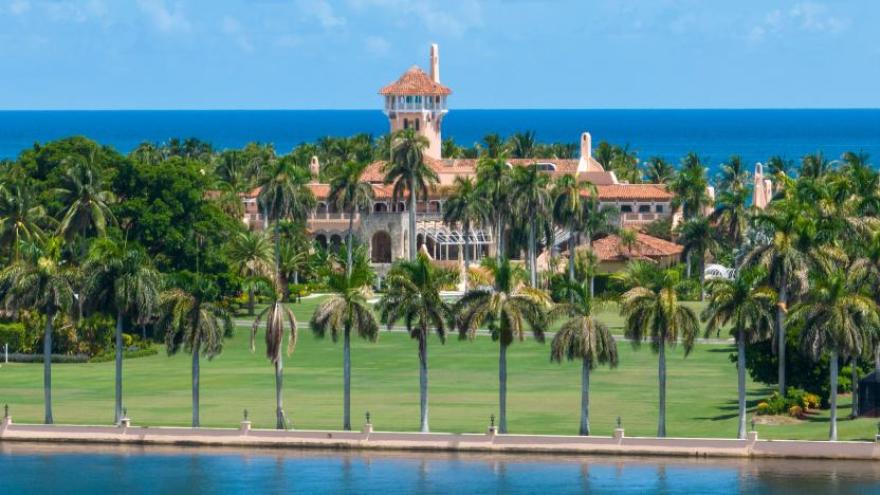 On September 12, lawyers for former President Donald Trump urged a federal judge to reject the Justice Department's attempt to continue to review documents seized from Mar-a-Lago, pictured here on August 31, as part of its criminal investigation.

(CNN) -- Lawyers for former President Donald Trump on Monday urged a federal judge to reject the Justice Department's attempt to continue to review documents seized from Mar-a-Lago as part of its criminal investigation, saying that the materials may not be classified and that his Florida resort is secure.

Trump argues that he has broad authority as President to declassify records, and that a former President should have "absolute right of access" to presidential records -- whether they are classified or not.

"In what at its core is a document storage dispute that has spiraled out of control, the Government wrongfully seeks to criminalize the possession by the 45th President of his own Presidential and personal records," Trump's legal team writes.

Trump's filing called Mar-a-Lago a "a secure, controlled access compound utilized regularly to conduct the official business of the United States during the Trump Presidency, which to this day is monitored by the United States Secret Service," and that the documents were kept in a locked room.

According to court documents, investigators previously asked Trump in June to secure any classified documents in a locked room at Mar-a-Lago.

When FBI agents arrived in August, they seized 11 sets of classified documents from Mar-a-Lago, including some marked as "top secret/SCI" -- one of the highest levels of classification, according to court documents. Prosecutors have also said that dozens of empty folders marked with "classified banners" were found in the search.

The "likelihood that improperly stored classified information may have been accessed by others and compromised" is a "core aspect of the FBI's criminal investigation," prosecutors have said.

"There still remains a disagreement as to the classification status of the documents. The Government's position therefore assumes a fact not yet established," Trump's team wrote.

The Justice Department submitted its request for a stay last week.

US District Judge Aileen Cannon, when she ordered a special master be brought in to review documents obtained during the search, halted any use of the seized materials for the DOJ's criminal investigation. She said, however, that the intelligence community's assessment could continue. The Justice Department argues the criminal probe could not be decoupled from the intelligence community's review.

Trump's team also wrote that a "President enjoys absolute authority under the Executive Order to declassify any information. There is no legitimate contention that the Chief Executive's declassification of documents requires approval of bureaucratic components of the executive branch. Yet, the Government apparently contends that President Trump, who had full authority to declassify documents, 'willfully' retained classified information in violation of the law. Moreover, the Government seeks to preclude any opportunity for consideration of this issue."