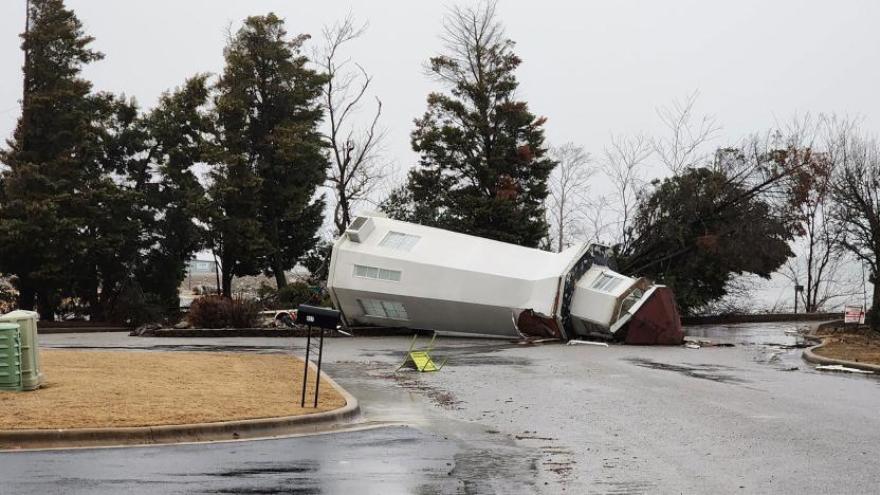 (CNN) -- A huge tornado that tore through the Alabama city of Selma Thursday caused "significant damage," Selma's mayor said -- one of more than a dozen twister reports made in that state alone as severe storms tear through the Southeast leaving several injured.

The "large and extremely dangerous tornado" in Selma, confirmed by the National Weather Service, hit the city at 12:19 p.m. CT and continued east, the service said.

"Please refrain from traveling the roadways and stay away from down power lines," Mayor James Perkins Jr. said in a Facebook post.

What appeared to be an enormous funnel cloud passed through the area, according to images shared by Mike Pitts. After it passed, Pitts' pictures showed homes without roofs, other roofs shorn of shingles, and roads blocked by piles of debris.

The storm "tore up" Selma resident Krishun Moore's house, but no one there was injured, she told CNN. She took shelter in a bathroom with her mother.

"All we heard was wind and the whole house was shaking," Moore said.

Selma, a city of some 17,000 people roughly 50 miles west of Montgomery, is the site of a landmark 1965 civil rights march in which protesters were beaten and tear-gassed by police on the Edmund Pettus Bridge, an incident referred to as "Bloody Sunday."

The Selma tornado came as severe storms capable of tornadoes are sweeping across the Southeast Thursday, injuring several people and leaving damage in several states with the potential for hours of more destruction ahead.

Ricky Adams, director of field operations with Alabama Emergency Management, said there are no immediate reports of fatalities in the state.

The damage is the worst in Selma, Adams said, "but again, it's still early and we're still assessing."

There are a lot of trees down and rescue operations are slow going, he added.

More than 35 million people in the Southeast and the Ohio Valley -- from Louisiana eastward to the Carolinas and from Kentucky south to the Gulf Coast -- are under some level of threat for severe storms Thursday that could include damaging wind gusts and tornadoes, the Storm Prediction Center said.

Thursday's greatest risk of severe storms -- an "enhanced" risk, or level 3 of 5 -- is predicted for about 9.5 million people over parts of Alabama and Georgia, including the Birmingham, Montgomery and Atlanta areas, the prediction center said.

More than 118,000 customers in Alabama, Georgia and Tennessee were without power as of 3:30 p.m. ET, according to PowerOutage.us.

Damage reports across the Southeast and the Ohio Valley were piling up Thursday as storms progressed.

In northern Alabama's Morgan County alone, a storm caused 10 to 15 injuries Thursday morning -- none of which are believed to be life-threatening -- and damaged numerous buildings, county sheriff's spokesman Mike Swafford said.

Streets and fields were littered with debris and downed power lines in Decatur, a Morgan County community roughly 25 miles southwest of Huntsville, pictures from city police and the county sheriff's department showed.

Siding was ripped off a Decatur hotel, according to pictures taken by hotel guest Mark Spychala, who said he sheltered in a laundry room as the storm hit Thursday morning.

"We lost power, and could hear the wind and rain" pummel the area outside, Spychala told CNN. The National Weather Service preliminarily attributed the Decatur damage to strong winds.

Several preliminary tornado reports were made in the morning in Alabama, including in northwestern Alabama's Winston County and western Alabama's Sumter County, where building damage was reported, the weather service said.

Downed trees and power lines were reported along several of the roads of Winston County, whose communities are dozens of miles northwest of Birmingham.

"Motorists are urged to only travel roadways in emergency situations and to remain weather aware," the Alabama Law Enforcement Agency said in a series of tweets about the Winston County damage.

No injuries were reported there, according to the agency, which said a tornado could have caused the damage. The weather service preliminarily said strong winds caused damage in the county.

Wind damage to trees and buildings also were reported in other locations across parts of Mississippi, Alabama and Kentucky before noon, the weather service said.