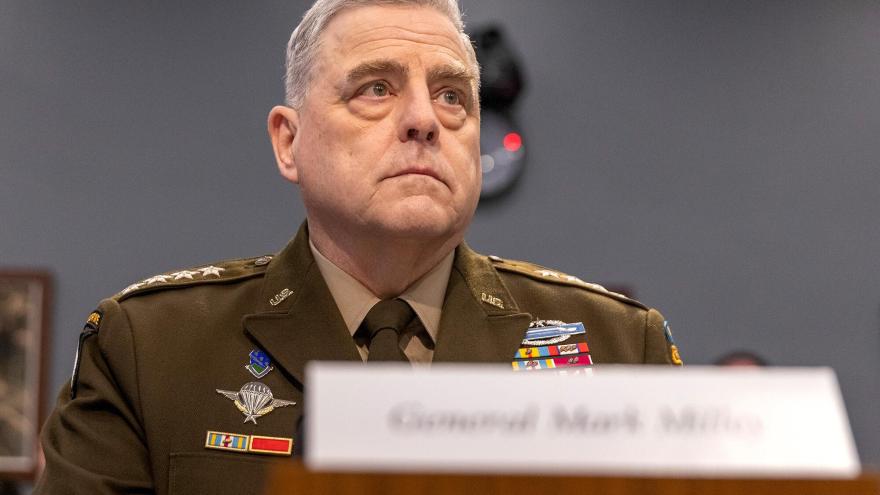 General Mark Milley during testimony on May 11, 2022 in Washington, DC. The most senior US general has ordered a comprehensive review of US military interactions with Chinese forces over the last five years as concerns about Beijing's assertive behavior in the Indo-Pacific region increases, according to three defense officials.

(CNN) -- The most senior US general has ordered a comprehensive review of US military interactions with Chinese forces over the last five years as concerns about Beijing's assertive behavior in the Indo-Pacific region increases, according to three defense officials.

By launching the review, Chairman of the Joint Chiefs of Staff Mark Milley is seeking to gain a detailed understanding of all interactions between the two militaries, especially any that could be deemed "unsafe" or "unprofessional" due to Chinese aircraft or ships operating too close to US military assets. Officials tell CNN the aim is to have a solid look at any changes in patterns of Chinese military activity.

"China has been on the rise, economically and militarily, for more than a decade. They've become more bold in the Pacific," Milley said in a written statement to CNN. "Maintaining open lines of communication and managing competition will reduce strategic risk. The US military's focus is on modernization and readiness. Our network of partners and allies is a source of strength."

Interactions between the two militaries are so sensitive that incidents are often not made public. For example, in June, a US C-130 transport plane being operated by US special forces had some type of encounter with Chinese aircraft, but the Pentagon has not publicly acknowledged the incident.

Milley asked for an initial internal staff review before his July 7 video teleconference call with his Chinese counterpart, Gen. Li Zuocheng. "Gen. Milley discussed the need to responsibly manage competition and maintain open lines of communication. Gen. Milley underscored the importance of the People's Liberation Army engaging in substantive dialogue on improving crisis communications and reducing strategic risk," according to a statement issued by Milley's office shortly after the call.

The review is expected to continue reflecting Milley's intense focus on ensuring the US has a full understanding of China's military capabilities and intentions.

Countering China is a key US strategic priority and last month US Defense Secretary Lloyd Austin called out Beijing for a series of coercive, aggressive and dangerous actions that threaten stability around Asia and vowed the United States would stand by partners to resist any pressure.

"The PRC's moves threaten to undermine security, and stability, and prosperity in the Indo-Pacific," Austin said, using the acronym to refer to the country by its official name, the People's Republic of China.

He listed a series of areas where he said China is muscling its neighbors, including sending large numbers of warplanes into the skies near Taiwan, dangerously intercepting the patrol planes of US allies and illegal fishing operations that "plunder the region's provisions."

In March, Adm. Philip Davidson, the then-head of US Indo-Pacific Command, described China as "the greatest long-term strategic threat to security in the 21st century."

"I'm worried that they're accelerating their ambitions ... to supplant the United States and our leadership role in the rules-based international order, which they've long said that they want to do that by 2050. I'm worried about them moving that target closer," Davidson said in a hearing before the Senate Armed Services Committee.

China is adamant its military is defensive.

"The development of China's national defense aims to meet its rightful security needs and contribute to the growth of the world's peaceful forces," the country's 2019 defense white paper said. "China will never threaten any other country or seek any sphere of influence."

The guided-missile destroyer sailed near the Spratly Islands -- known as the Nansha Islands in China -- in the southeastern South China Sea in a so-called "freedom of navigation operation," the 7th Fleet statement said.

The US Navy operation in the island chain where China has built military fortifications on man-made islands challenged "restrictions on innocent passage imposed by the People's Republic of China (PRC), Vietnam, and Taiwan," the statement said.