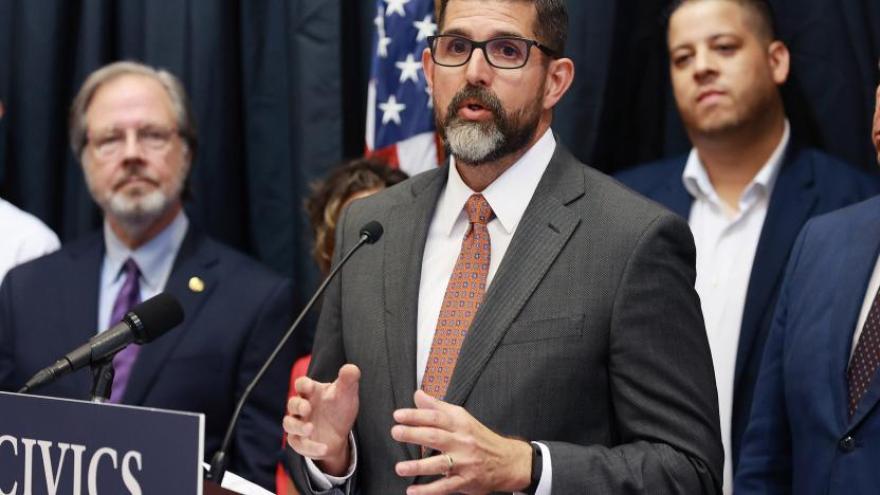 (CNN) -- Just days after 22 states filed a lawsuit fighting the new US Department of Agriculture policy seeking to protect against discrimination based on sexual orientation and gender identity, Florida's top education official is advising schools in his state to ignore the guidance.

Title IX prohibits sex discrimination at federally funded schools. The new guidance threatens to withhold federal funding for school lunch and other USDA programs if states fail to protect against discrimination based on sexual orientation and gender identity.

In the letter issued Thursday and sent to CNN, Diaz says policies protecting against LGBTQ discrimination by the US Departments of Education and Agriculture "should not be treated as governing law."

He referenced a recent ruling in a lawsuit involving the Department of Education, where a federal judge ruled the Biden Administration must pause its enforcement of federal guidance seeking to protect transgender students and workers in 20 Republican-led states.

"The Department will not stand idly by as federal agencies attempt to impose a sexual ideology on Florida schools that risk the health, safety, and welfare of Florida students," Diaz writes in the letter.

US Department of Education officials said in a statement, "This is another attempt from Florida politicians to foster a harmful environment of fear for LGBTQ+ students, and that is unacceptable. The Department of Education has made clear its view that Title IX includes protections against discrimination based on sexual orientation and gender identity. The Department regularly receives and investigates complaints of discrimination against LGBTQ+ students -- as it has done for the previous three administrations.

"While the rulemaking process is underway for our proposed rule, we will continue to evaluate complaints in Florida and elsewhere to assure compliance with Title IX. Federal civil rights law, including Title IX, preempt state or local law when there is a conflict between the two," the statement went on to say.

Diaz also criticized guidance issued by Florida Agriculture Commissioner, Nikki Fried, who sent a letter to superintendents clarifying the new USDA policy and warning, "Discrimination based on the updated protected classes will result in the same noncompliance as discrimination against the other protected classes."

A copy of Fried's letter was shared with CNN by Florida Department of Education spokesperson Alex Lanfranconi.

"Commissioner Fried threatened to remove Florida's most vulnerable students from the National School Lunch Program if our schools do not accept the Biden Administration's radical gender ideology. We will not allow our children to be used as bargaining chips for individuals who are motivated by self-interest rather than the health and safety of all students," Lanfranconi said in an email to CNN.

Fried, a Democrat, is running for governor in Florida. CNN has reached out to the USDA and Fried's office for comment.

Diaz wrote in the letter schools are not required to give transgender students access to bathrooms or allow them to compete on sports teams that do not match the sex assigned at birth. He said otherwise, schools would "jeopardize the safety and wellbeing of Florida students and risk violating Florida law."

The administration of Florida Gov. Ron DeSantis has a history of instituting restrictive polices concerning LGBTQ students. Last year the governor signed a law banning transgender girls and women in public secondary schools and colleges from participating on girls' and women's sports teams. In late March, he signed House Bill 1557, the Parental Rights in Education law, known by opponents as the "Don't Say Gay," law which prohibits classroom instructions on gender identity and sexuality for students in kindergarten through third grade.

Last month, Florida Attorney General Ashley Moody joined 25 others in a letter to the President expressing disdain for the new USDA policy. However, the state was notably absent from the lawsuit filed earlier this week.