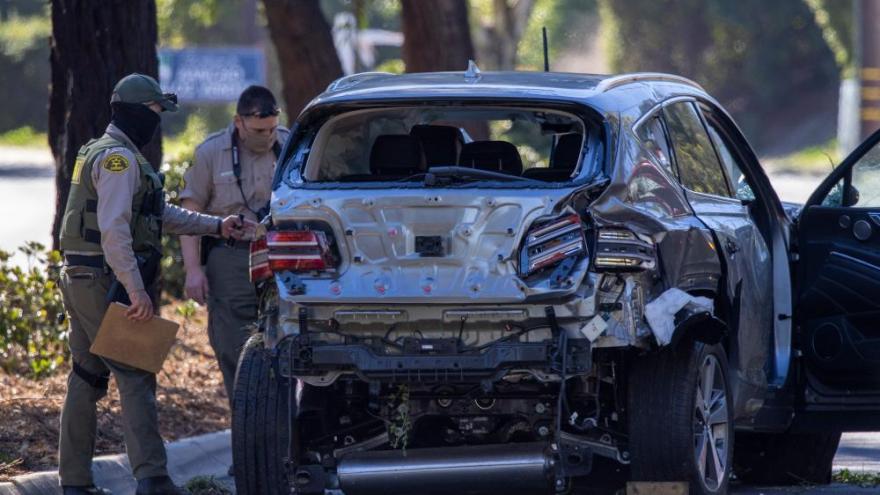 Tiger Woods told sheriff's deputies that he had no recollection of driving or how the accident happened. Woods was driving when he seriously injured on February 23, 2021 in Rolling Hills Estates, California.

(CNN) -- When Tiger Woods crashed his car in Southern California last week, he told sheriff's deputies that he had no recollection of driving or how the accident happened, according to a Los Angeles County affidavit for a search warrant of the vehicle's black box.

Woods was driving February 23 in Rancho Palos Verdes, near Los Angeles, shortly after 7 a.m. PT when his Genesis SUV hit a "Welcome to Rolling Hills Estates" sign, crossed a center divider and traveled more than 150 feet across the shoulder of the road through shrubbery and uprooted tree before coming to a stop on the driver's side, according to the affidavit.

Woods sustained injuries and cuts to his face and multiple fractures and compound fractures to his right leg, the affidavit said.

The documents, obtained by CNN, said Woods regained consciousness before sheriff's deputies arrived at the scene of the crash. While he remained sitting in the driver's seat of the vehicle with blood on his face and chin, Woods told the deputies he had no recollection of driving or how the collision occurred.

A witness also approached the vehicle after hearing the crash and noticed Woods was "unconscious and not responding to his questions," Deputy Johann Schloegl, the traffic collision investigator on the crash, wrote in the affidavit.

There was no evidence Woods was impaired by drugs or alcohol, according to first responder interviews cited by the affidavit.

The SUV was provided to Woods by the sponsor of the golf tournament he hosted over the previous weekend. The LA County Sheriff's Office told CNN in a statement earlier this week it executed a search warrant for the black box in the courtesy vehicle.

The data stored in the box, along with "several data recording modules" in the vehicle, "may provide information regarding the use of brakes and the accelerator by the driver" as well as other factors that could determine the cause of the crash, the affidavit said.

Speaking to USA Today, Schloegl said Tuesday the search warrant was just due diligence and he didn't consider the probe a criminal investigation.

Authorities have previously said they believe the incident was "purely an accident" but they would have to pull the black box event recorder from the vehicle to make that determination.