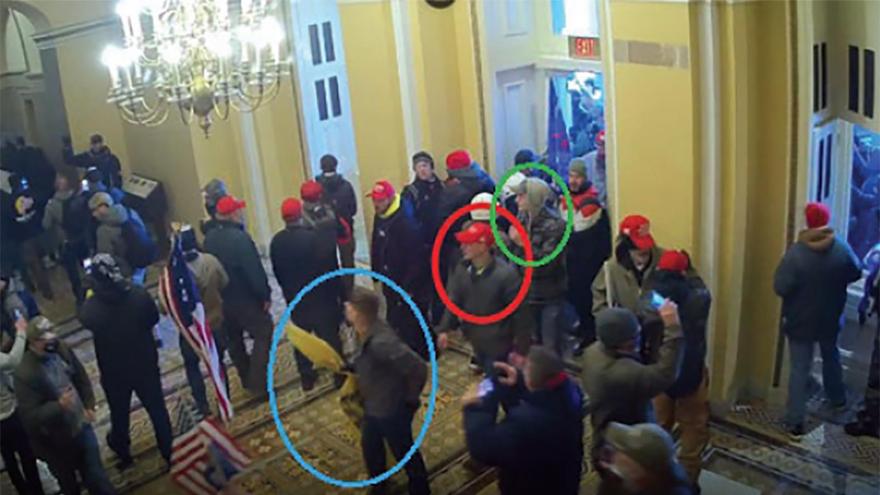 (CNN) -- Three active-duty Marines who work in intelligence -- one of whom allegedly espoused support for a second civil war -- were arrested this week for breaching the US Capitol building with a mob of Trump supporters on January 6, 2021.

FBI agents first became aware of Coomer because he posted pictures of himself inside the Capitol building on Instagram, according to a federal affidavit. As agents investigated his account, they discovered messages he wrote to a separate user that he was waiting for a second civil war.

"(E)verything in this country is corrupt. We honestly need a fresh restart," Coomer wrote, according to the affidavit. "I'm waiting for the boogaloo."

"What's a boogaloo," the associate asked.

"Civil war 2," Coomer replied, according to court documents, referencing a rallying cry that is used amongst some far-right groups to call for a second civil war.

Abate, according to court documents, admitted that he had gone into the Capitol with two "buddies" during the riot when he was interviewed for a security clearance. Abate allegedly said in the interview that when he saw the riot was being "portrayed negatively," he decided not to tell anyone about his involvement.

None of the defendants have entered a plea or have lawyers listed in court documents.

According to military records, Coomer is an Intelligence Surveillance Reconnaissance System Engineer based out of Camp Pendleton in California. Abate is a Special Communication Signals Analyst with the Marine Corps Cryptologic Support Battalion at Fort Meade in Maryland, and Hellonen is a Special Comm Signals Analyst at Camp Lejeune in North Carolina.

A Marine Corps spokesperson said in a statement to CNN Friday that it is "aware of an investigation and the allegations" and is "fully cooperating with appropriate authorities in support of the investigation."

Investigators say that video footage from inside the Capitol shows Coomer moving through the building with two other men, later identified by their military identification cards as Abate and Hellonen.

As the three men traversed the building, they allegedly went into the Capitol rotunda, placed a red MAGA hat on one of the statues and took a photo with it.

The trio spent nearly an hour inside the Capitol building, according to court documents.