This egg-laying mammal blows bubbles to cool off 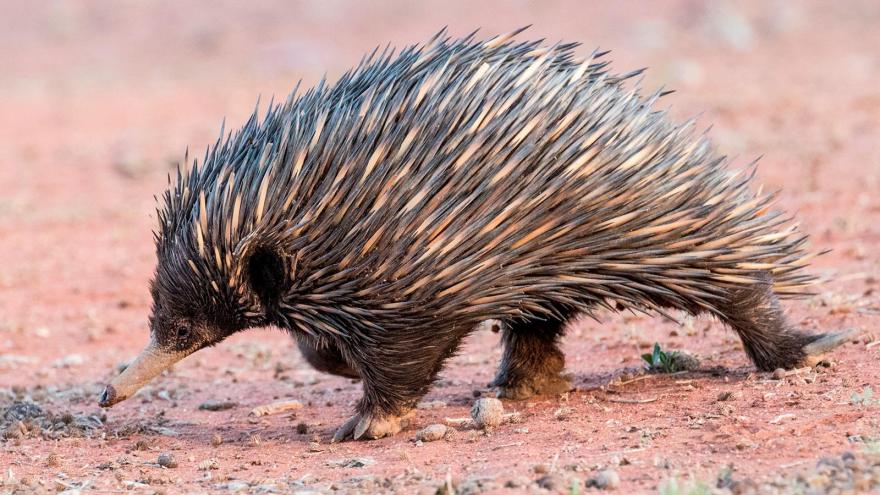 (CNN) -- Australia's echidna has developed a curious way to cool off — blowing bubbles out of its beak-like snout.

The short-beaked echidna is common across Australia, Tasmania and New Guinea and along with the platypus, it's one of Earth's few monotremes — mammals who lay eggs — and has been around for millions of years. With a long, sticky tongue, a penchant for snacking on ants and termites, and a body covered in barbless quills called spines, the echidna is also known as a spiny anteater.

Yet the unusual creature lives in extremely hot, arid regions in Australia, where its very existence seems impossible.

Now, new research has shown how the short-beaked echidna has adapted to beat the heat — something that will become even more crucial as the world warms due to the climate crisis.

The researchers captured infrared footage of 124 echidnas for 34 days across 12 months to see how the animals shed heat. The journal Biology Letters published a study detailing the findings on Tuesday.

The researchers didn't expect to find echidnas blowing mucus bubbles as a way to regulate their internal temperature.

"We observed a number of fascinating methods used by echidnas to manage heat and which allow the animal to be active at much higher temperatures than previously thought," said lead study author Dr. Christine Cooper, senior lecturer in Curtin's School of Molecular and Life Sciences, in a statement.

"Echidnas blow bubbles from their nose, which burst over the nose tip and wet it. As the moisture evaporates it cools their blood, meaning their nose tip works as an evaporative window."

The thermal data also showed that the echidnas can lose heat on their underside and legs — but they can use their spines to retain body heat if need be.

The researchers were surprised to see that the echidnas were active despite the fact that the air temperature was several degrees above what is considered the "lethal" level for the animals.

In the summer, echidnas switch to nocturnal behavior to escape the heat. But they have also been seen sheltering inside hollow logs where the air temperature is well above their limit.

The latest findings suggest that the previous estimates of the high temperatures echidnas can handle were "underestimates," according to the new study.

"Echidnas can't pant, sweat or lick to lose heat, so they could be impacted by increasing temperature and our work shows alternative ways that echidnas can lose heat, explaining how they can be active under hotter conditions than previously thought," Cooper said.

"Understanding the thermal biology of echidnas is also important to predict how they might respond to a warming climate."

Next, she and her colleagues want to model just how much heat echidnas can shed to predict how they can withstand different environmental conditions and warming.

These hardy animals have proven to be more resilient against high temperatures than previously believed, but it doesn't mean that increasing temperatures won't be a challenge for them, Cooper said.