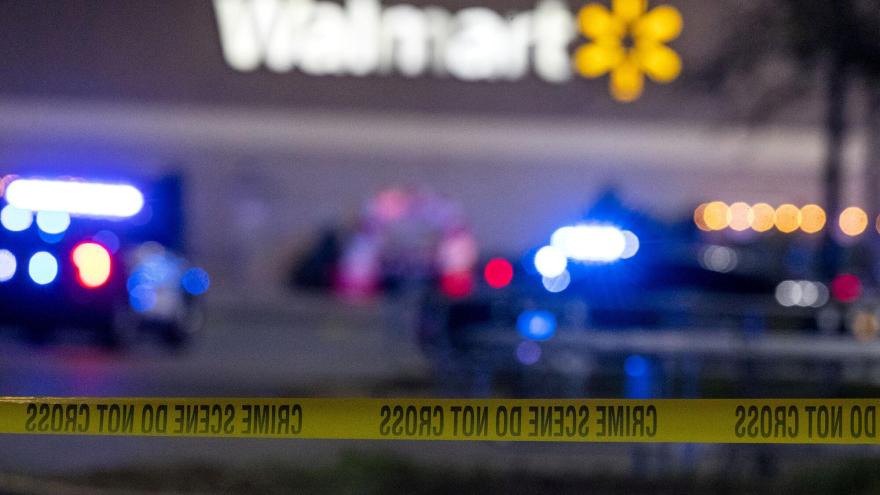 Police tape cordons off the scene of a fatal shooting at a Chesapeake, Virginia, Walmart on Tuesday.

(CNN) -- The manager of a Virginia Walmart who killed six people and himself in a Tuesday night massacre has been identified as 31-year-old Andre Bing, the city of Chesapeake tweeted.

"He was armed with one handgun and had multiple magazines on his person," the statement from the city said.

Bing was an overnight "team lead" for the Walmart in Chesapeake, Virginia, the source familiar with the matter told CNN.

Fellow employees described how a calm shift at the Walmart Supercenter turned into a night of horror, bloodshed and tragedy.

The deadly rampage started around 10:12 p.m., less than an hour before the Walmart Supercenter was set to close.

Employee Kevin Harper said he had just left the room when a colleague came in and started shooting.

"I just left out the breakroom ... (the gunman) starts cappin' people up in there," Harper said in a Facebook Live video. The video is no longer on his Facebook page, but it has been re-shared on social media.

"He came in there and just started spraying," Harper said. "I'm sorry for the victims."

The motive behind the attack remains a mystery.

Investigators swept the store overnight into Wednesday, searching for victims or people who may have been hiding, Chesapeake Police spokesperson Leo Kosinski said.

"Three individuals, including the shooter, were located deceased in the break room of the store," the city of Chesapeake tweeted. "One victim was located deceased toward the front of the store. Three other victims were transported to local hospitals for further treatment, but succumbed to their injuries."

The Thanksgiving week massacre marks yet another mass shooting in a place traditionally seen as safe -- from schools to hospitals to stores.

Just 170 miles west of Chesapeake, a 22-year-old student at the University of Virginia in Charlottesville allegedly opened fire on fellow students this month, killing three of them on a bus returning to campus from a field trip to Washington, DC.

Last weekend, a 22-year-old shot and killed five people at an LGBTQ nightclub in Colorado Springs, Colorado, and 19 others were injured, authorities said.

The US has suffered more than 600 mass shootings so far this year, according to the Gun Violence Archive. Both the non-profit and CNN define mass shootings as those in which four or more people are shot, not including the assailant.

Mother in shock after surviving shooting

Joetta Jeffery told CNN her mother, Betsy Umphlett, sent her texts from inside the store during the shooting, alerting her that someone had opened fire.

"I'm crying, I'm shaking," Jeffery told CNN. "I had just talked to her about buying turkeys for Thanksgiving, then this text came in."

Jeffery said her mother is uninjured but in shock, and they've been reunited.

Chesapeake city officials have asked people to stay away from the store during the investigation.

"Our first responders are well-trained and prepared to respond; please give them space to do so," the city tweeted.

A reunification center was set up at the Chesapeake Conference Center, city officials said. They asked that only immediate family and emergency contacts for people who were in the store go to the center.

In a statement, Walmart said it's shocked at the tragedy that unfolded in one of its stores.

"We're praying for those impacted, the community and our associates. We're working closely with law enforcement, and we are focused on supporting our associates," the company said in the statement.

The Washington, DC, field office of the Bureau of Alcohol, Tobacco, Firearms, and Explosives is assisting local police in the investigation, the bureau said on Twitter.