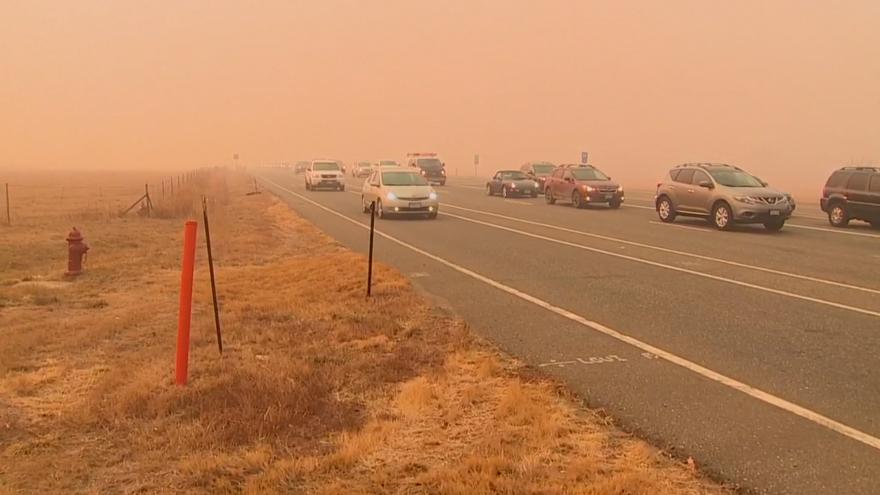 (CNN) -- "Historic" 80-100 mph winds, with gusts as high as 115 mph, fed wildfires that injured at least six people, prompted a hospital to send patients elsewhere and forced the evacuation of two towns near Boulder, Colorado.

The towns -- Louisville and Superior -- are about 4 miles apart, not far from Boulder.

At least six people are being treated for injuries related to one of the fires, a spokesperson for UCHealth told CNN. Kelli Christensen said no more information was available for the patients, who are at UCHealth Broomfield Hospital.

Another hospital, Avista Adventist Hospital, was prompted to evacuate its patients and employees. The facility has 114 beds, according to its website.

"If you're in the area, please act quickly," theBoulder County Office of Emergency Management tweeted to Louisville residents.

The US Census Bureau says Louisville has about 21,000 residents and Superior has 13,000.

"We are in the midst of a truly historic windstorm across the front range, foothills and urban corridor," said the National Weather Service office in Boulder.

Widespread wind gusts of 80-100 mph have been observed, the weather service said, and "a handful of sites in Rocky Flats have seen several hours worth of gusts 100-115 mph."

County residents have been asked to evacuate if they see flames from one of multiple wildland fires.

"Boulder OEM is getting many calls about residents seeing fire. IF YOU SEE FIRE, EVACUATE. Go east, go north, but leave immediately," the office tweeted.

The hurricane-force wind gusts being reported are being attributed to "exceptional mountain wave amplification," which is a major increase in wind speed as air flows over and down the mountains into the lower elevations that can occur under very specific atmospheric conditions.

High-wind warnings are in effect for portions of Colorado and Wyoming through this evening. Sustained winds of 25 to 40 mph are forecast with gusts exceeding 80 mph.

The "strongest winds below 6000 feet are expected to be near the base of the foothills from Boulder north to Fort Collins to the Wyoming border," the weather service said.

In addition to quickly spreading fires, these strong winds likely will blow down trees and power lines, which could lead to widespread power outages and difficult travel.

There will likely be a "rapid retreat of the strongest winds back into the foothills" by Thursday evening, the NWS office said.

By morning, the region will experience "weather whiplash," going "from fire to snow," according to the weather service. An advancing cold front will push into the area and bring snow showers to foothills and front range by sunrise.

A winter storm warning is in effect for the region beginning at 5 a.m. MT Friday and calls for 5-10 inches of snow by Saturday. The combination of heavy snow and winds associated with the front and terrain will create treacherous travel conditions at time.

Colorado Gov. Jared Polis said in a tweet that fast winds are spreading fire flames quickly and all aircraft are grounded.

"Prayers for thousands of families evacuating from the fires in Superior and Boulder County," he tweeted.

Later, he declared a state of emergency for the area.