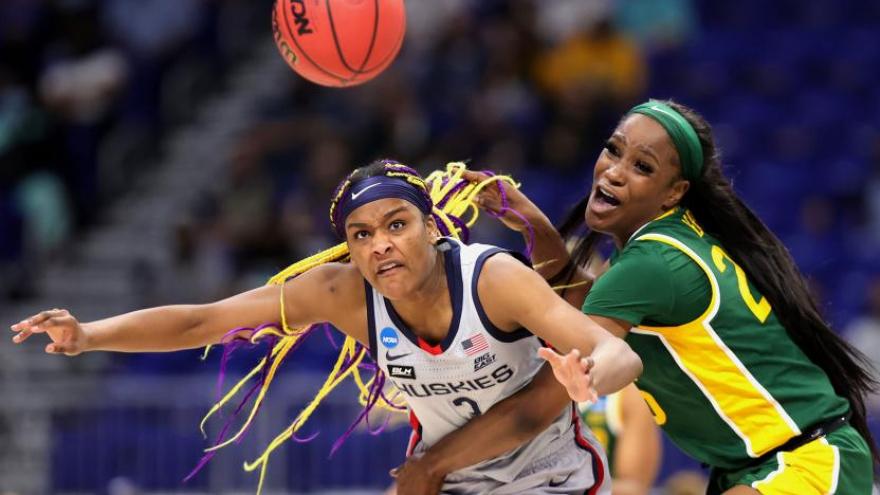 Queen Egbo #25 of the Baylor Lady Bears and Aaliyah Edwards #3 of the UConn Huskies are seen playing at NCAA Women's Basketball Tournament on March 29 in San Antonio, Texas. The Supreme Court will take up a case on paying NCAA student-athletes on March 31.

(CNN) -- The Supreme Court will take up a case that could reshape college sports on Wednesday, pitting the NCAA and 11 conferences against a class of student athletes seeking compensation.

It comes as college sports raise billions of dollars from ticket sales, television contracts and merchandise and supporters of the students say they are being exploited and barred from the opportunity to monetize their talents. In 2016, for example, the NCAA negotiated an eight-year extension of its broadcasting rights to March Madness, worth $1.1 billion annually.

The case thrusts the justices into the center of a debate -- for the first time since 1984 -- that is also playing out in Congress and state legislatures in an industry worth billions.

On one side are those who seek to further compensate athletes, many of who(m) may never reach the pros. The other argues that more money in the system -- even under the guise of "educational expenses" -- will only benefit top athletes at a few schools, diminishing educational opportunities for others and eviscerating the nature of college sports.

As things stand, schools are allowed to provide tuition and fees, room and board, books and other expenses related to the cost of attendance. They are permitted to make payments for certain athletic participation awards, tutoring, and study abroad expenses related to a course.

The student athletes behind the current lawsuit, led by former West Virginia football player Shawne Alston, initially sought to eliminate all other restrictions on payment.

A district court did not go that far. It preserved limits on compensation unrelated to education, but ruled that caps on some education related benefits violate anti-trust laws. The ruling was largely upheld by the 9th US Circuit Court of Appeals although the schools are waiting for the Supreme Court to act before making any changes.

If the ruling is upheld, it will mean that the NCAA must permit student athletes to receive unlimited non-cash "education-related benefits" including post-eligibility internships. The students can also receive annual payments up to $6,000 if they maintain academic eligibility.

Seth Waxman, a lawyer for the NCAA argues that "a defining characteristic of NCAA-regulated college sports" has been that they are played by amateur student-athletes" who are not paid for their play. The lower court ruling would destroy "the distinction between college and professional sports," he said.

In court papers, Andrew Pincus, arguing on behalf of the athletic conferences, cautioned that if the court affirms the lower court decision it will lead to a slippery slope of questionable spending not entirely related to education as well as a multitude of lawsuits.

"Given the likelihood that schools will race each other to the bottom once universal 'academic achievement' payments are authorized," Pincus argued, the lower court opinion "threatens to make pay-to-play ubiquitous in college football and basketball."

He added that post-eligibility cash internships could become typical and might be financed by boosters -- further infecting a sport based on amateurism.

Gabriel Feldman, the Director of the Sports Law Program at Tulane University, said that the restrictions on compensation are in place because of the court's prior interpretation balanced anti-trust law with the NCAA's desire to preserve its amateur status.

"If the Supreme Court finds that amateurism is no longer a legitimate argument for the NCAA it could open the door to competition among schools for college athletes," Feldman said.

Other experts aren't sure that more money for expenses related to education will undermine the distinction between college and pro sports.

"All college fans know that there is already a lot of money in college athletics and it doesn't seem to hurt the demand," Audrey Anderson, a lawyer at Bass, Berry & Sims said.

"Some of the athletes are already getting something when their team wins for playing well, and the district court found that allowing them to get similar cash awards for academic achievements or unlimited benefits related to their education won't change the market for the product," she said.

Lawyers for Football Bowl subdivision and Division 1 men's and women's basketball players say that the model of amateurism can be maintained even when providing more compensation to the students for education related expenses. They say the lower court opinion is carefully tailored and it frees the conferences and schools to compete for student-athletes by supporting their academic achievement.

"While coaches and administrators receive substantial bonuses when their student-athletes meet academic benchmarks, schools cannot offer the same type of academic incentives, in any amount, to the student-athletes themselves," Jeffrey Kessler argued on behalf of the students.