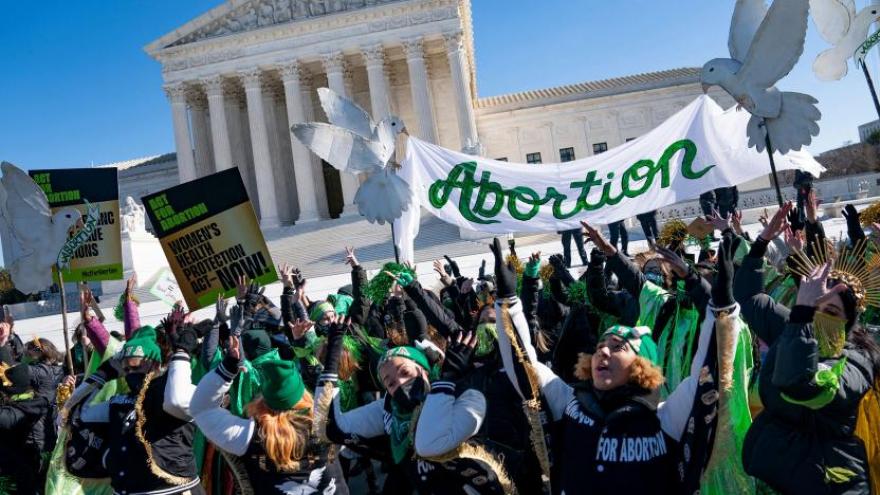 Abortion rights activists participate in a "flash-mob" demonstration outside of the US Supreme Court on January 22 in Washington, DC.

(CNN) -- In a stunning breach of Supreme Court confidentiality and secrecy, Politico has obtained what it calls a draft of a majority opinion written by Justice Samuel Alito that would strike down Roe v. Wade.

The draft was circulated in early February, according to Politico. The final opinion has not been released and votes and language can change before opinions are formally released. The opinion in this case is not expected to be published until late June.

CNN has not independently confirmed the document's authenticity. Politico says it has authenticated the draft. A Supreme Court spokesperson declined to comment to CNN.

According to the draft, the court would overturn Roe v. Wade's holding of a federal constitutional right to an abortion. The opinion would be the most consequential abortion decision in decades and transform the landscape of women's reproductive health in America.

Politico's publishing of the draft is unprecedented by the high court's standards of secrecy. The inner deliberations among the justices while opinions are being drafted and votes are being settled are among the most closely held details in Washington.

The case in question is Dobbs v. Jackson. It concerns a challenge to Mississippi's 15-week ban on abortion and oral arguments were heard on December 1. The release of a final opinion in the case is expected later this Spring or early summer.

In the draft opinion, Alito writes that Roe "must be overruled."

"The Constitution makes no reference to abortion and no such right is implicitly protected by any constitutional provision," Alito wrote. He said that Roe was "egregiously wrong from the start" and that its reasoning was "exceptionally weak, and the decision has had damaging consequences."

He added, "It is time to heed the Constitution and return the issue of abortion to the people's representatives."

"That is what the Constitution and the rule of law demand," he said, according to the draft.

Already nearly half of the states have or will pass laws that ban abortion, while others have enacted strict measures regulating the procedure.

Oral arguments in the case were held on December 1.

Under normal procedure, by the end of that week the justices would have met in their private conference to take a preliminary vote on the issue. They would have gone around the table in order of seniority discussing their take on the case. Chief Justice John Roberts would have gone first, with Justice Amy Coney Barrett last.

After that initial tally, if Roberts was in the majority he would assign the majority opinion. Otherwise the most senior justice would have taken that responsibility. After that, draft opinions would go between chambers. In the past, justices have changed their votes and sometimes a majority opinion ultimately becomes a dissent.

A reversal of Roe would leave abortion policy up to individual states and would likely produce a patchwork system where the procedure would remain largely available in Democratic-led states, while Republican-led states would pass extreme limits or outright bans on it.

The Dobbs case was perhaps the most anticipated case of the court's term, and most court observers expected that the conservative majority was likely to scale back or outright overturn Roe's holding. At oral arguments, Roberts was the only one of the six Republican appointees who signaled interest in exploring a narrower opinion that would have upheld Mississippi's law but preserved some protections for abortion rights.

Because it is one of the court's most high-stakes and contentious decisions, the anticipation was that the opinion would be among the final ones the court released at the end of its term in late June.

Roe is the law of the land until the court formally issues its opinion.

"Let's be clear: This is a draft opinion. It's outrageous, it's unprecedented, but it's not final. Abortion is your right -- and it is STILL LEGAL," Planned Parenthood said in a tweet following Politico's reporting.

Overturning Roe would be the culmination of a decades-long project of the conservative legal moment. Former President Donald Trump, when running for the White House in 2016, promised to appoint Supreme Court justices who would overturn Roe "automatically." His nominee Justice Brett Kavanaugh replaced Justice Anthony Kennedy, who sided with the liberal justices in past abortion rights cases. Barrett replaced the late Justice Ruth Bader Ginsburg, a Democratic appointee and abortion rights champion who died weeks before the 2020 election.