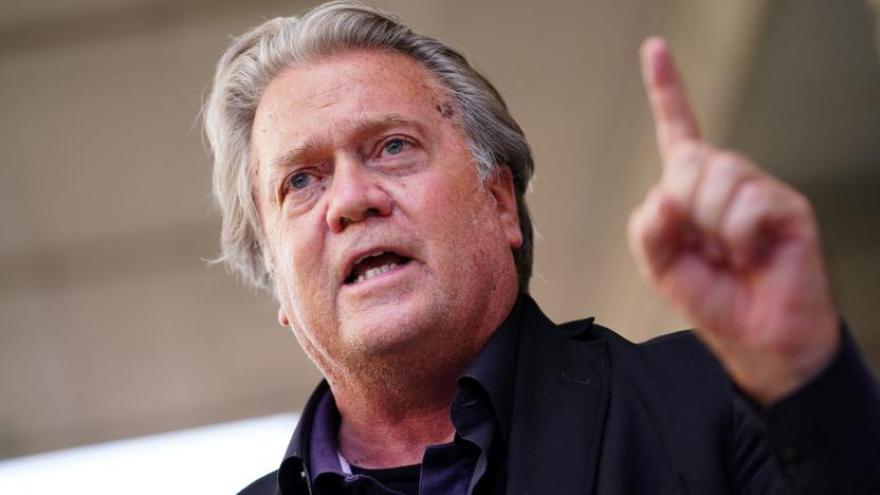 Steve Bannon, seen here on July 19, is expected to surrender on September 8 to face New York state charges related to his fundraising effort to build a wall along the southern US border.

(CNN) -- Former Donald Trump aide Steve Bannon pleaded not guilty Thursday in a New York court to state charges of money laundering, conspiracy and fraud related to an alleged online scheme to raise money for the construction of a wall along the southern US border, according to his attorney.

The state charges are based on the same conduct Bannon was charged with by federal prosecutors in 2020 that alleged he and three others had defrauded donors in the border wall effort, which raised more than $15 million. He was later pardoned by Trump.

Presidential pardons do not apply to state investigations, however.

Handcuffed and flanked by officers as they walked past reporters into court, Bannon said, "This is what happens in the last days of a dying regime. They will never shut me up, they'll have to kill me first. I have not yet begun to fight."

According to the indictment, one of Bannon's associates who isn't named created an online fundraising platform to raise money to build a wall on the border. In order to receive the money from donors, the organizer promised that "100% of the funds" would go towards building a border wall, and he would not be taking a salary from the project, prosecutors say.

Bannon's associates discussed telling the public that no one involved in the "We Build The Wall" project would take a salary, according to the indictment. In a text message, one of the associates told Bannon that the claim "removes all self interest taint on this" and it "gives [the CEO] saint hood," the indictment says.

Bannon publicly claimed he was acting "kind of as a volunteer" for We Build The Wall, prosecutors said in the indictment. Behind the scenes, Bannon allegedly helped to funnel hundreds of thousands of dollars to himself and his associates.

James said everyday Americans play by the rules, but powerful, politically connected people think they're above the law.

"Steve Bannon stands out as a perfect example of this blatant inequality," James said.

Bannon appeared to blame his situation on political motivations.

"This an irony, on the very day the mayor of this city has a delegation down on the border, they are persecuting people here, that try to stop them at the border" he told reporters outside the DA's office Thursday.

"This is all about 60 days from the day," he said later, referencing the November election.

Bannon had been federally charged with diverting more than $1 million to pay an alleged co-conspirator and cover hundreds of thousands of dollars in personal expenses. Prosecutors alleged that the donors, including some in New York, were falsely told that all the money contributed would go toward the construction effort.

In recent months, several people close to Bannon were brought before the state grand jury.

Manhattan prosecutors subpoenaed bank records and quietly worked on the investigation over the past year as they investigated Trump and his real estate business, sources familiar with the matter previously told CNN. But the district attorney's office deferred a charging decision on Bannon until federal prosecutors concluded their case against his three co-defendants, who were not pardoned.

Bannon issued a statement late Tuesday, in part calling the indictment "phony charges" and "nothing more than a partisan political weaponization of the criminal justice system."

"I am proud to be a leading voice on protecting our borders and building a wall to keep our country safe from drugs and violent criminals," he said in the statement, adding: "They are coming after all of us, not only President Trump and myself. I am never going to stop fighting. In fact, I have not yet begun to fight. They will have to kill me first."

A federal jury in July found Bannon guilty of contempt of Congress for defying a subpoena from the House select committee investigating the January 6, 2021, US Capitol attack. He is scheduled to be sentenced in October and faces a minimum sentence of 30 days in jail, according to federal law.