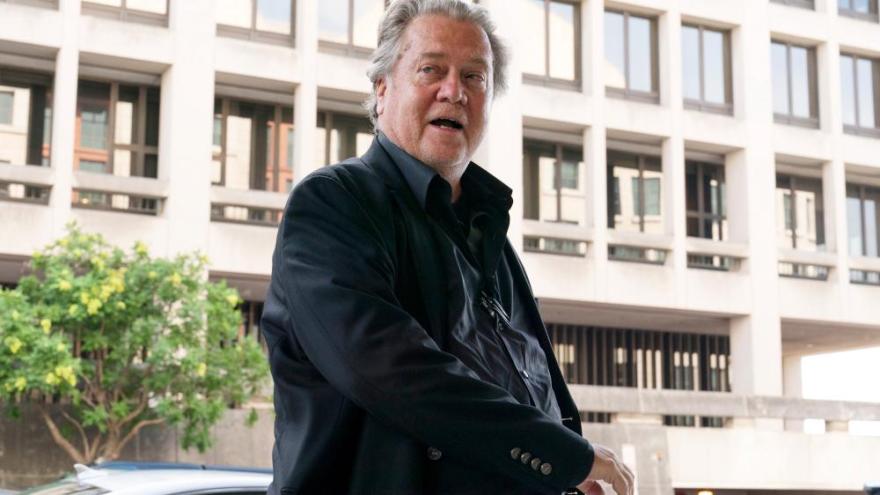 (CNN) -- A federal jury has found former Trump adviser Steve Bannon guilty of contempt of Congress for defying a subpoena from the House select committee investigating the January 6 attack.

The conviction is a victory for the House January 6 select committee as it continues to seek the cooperation of reluctant witnesses in its historic investigation. It is also a victory for the Justice Department, which is under intense scrutiny for its approach to matters related to the January 6 attack.

After nearly two days of hearing evidence and witness testimony, the jury reached a unanimous verdict on the two contempt charges in less than three hours.

Bannon will be sentenced on October 21. He faces a minimum sentence of 30 days in jail, according to federal law.

Bannon's team did not mount a defense during the trial, and he did not take the stand.

He was indicted by a federal grand jury in November after he blew off October deadlines for producing the documents and testimony the committee had subpoenaed.

In demanding his cooperation, the committee had pointed to Bannon's contacts with Trump in the lead up to the Capitol assault, his presence in the so-called war room of Trump allies at the Willard Hotel in Washington the day before the riot, and a prediction he made on his podcast before the riot that "all hell" was going to "break loose."

"In short, Mr. Bannon appears to have played a multi-faceted role in the events of January 6th, and the American people are entitled to hear his first-hand testimony regarding his actions," the House committee report recommend a contempt resolution against him said. The House voted to hold Bannon in contempt in October.

Before the verdict was announced, Bannon entered the courtroom before the jury reassembled in a relatively buoyant mood. He threw his face mask down on the table as soon as he arrived, then sat on his phone for several minutes, a few times showing his lawyer a message.

The forewoman read the verdict in a soft voice. She wore a green face mask -- and the rest of the jury all kept their masks on as well.

The jurors answered in unison, "yes," guilty was their verdict.

Bannon is one of two uncooperative witnesses to be charged so far by the Justice Department for contempt of Congress. Trump White House adviser Peter Navarro was indicted by a grand jury last month for not complying with a committee subpoena and has pleaded not guilty.

In its closing argument Friday, the Justice Department told the jury that the case was "not complicated," but that it was "important."

"This is a simple case about a man -- that man -- who didn't show up," prosecutor Molly Gaston said. Bannon, she argued, "did not want to recognize Congress' authority or play by the government's rules."

Bannon's team argued in closing that the jury had reason to doubt the case, while suggesting the government's key witness was not impartial.

"Mr. Bannon was not in a position to testify" for the committee, his attorney Evan Corcoran told the jury, while pointing to statements Trump had made about executive privilege in the House investigation.

When the House committee was demanding his cooperation, Bannon's lawyer claimed that Trump's stated assertions of executive privilege prevented Bannon from testifying or producing arguments -- an argument the committee roundly rejected. Lawmakers noted that Bannon had for years not been a government official, while pointing to their interest to topic areas not involving conversations with Trump.

At the trial, however, Bannon's arguments about executive privilege were not a central focus -- even as his lawyers found ways to bring attention to the issue. They did so in the face of rulings from the judge deeming it largely irrelevant, under appellate precedent, to the elements of the contempt crime.

How executive privilege discussions should have figured into the trial proceedings may be a question Bannon presses if he appeals the conviction. Bannon's team also made several arguments for the trial record for why he should have been allowed to put select committee Chairman Bennie Thompson and other committee members on the stand for testimony. The judge refused to allow Bannon to call them to the stand because of a House request to block their testimony, citing constitutional restrictions on when lawmakers can be subpoenaed.

During the trial, the Justice Department put on the stand a House staffer who testified about the several communications between the committee and Bannon's attorney about the subpoenas, and the House's demands that he comply by the deadlines stated. Prosecutors' second witness was an FBI agent who testified briefly about Bannon social media posts sharing articles describing his non-compliance.

To try to undermine their testimony, the defense sought to create doubt the subpoena deadlines were firm, that the subpoena was properly issued, and that the social media reposts expressed Bannon's own views. Neither Bannon nor his attorney for dealing with the committee took the stand themselves, however. Bannon's trial lawyer read a statement from Bannon to the court in which Bannon said that he had "very much wanted to" testify "since the day he was indicted," but that the judge's rulings hamstringing his lines of defense meant that he would be unable to tell "the true facts" if he took the stand. The jury was not present for that statement.