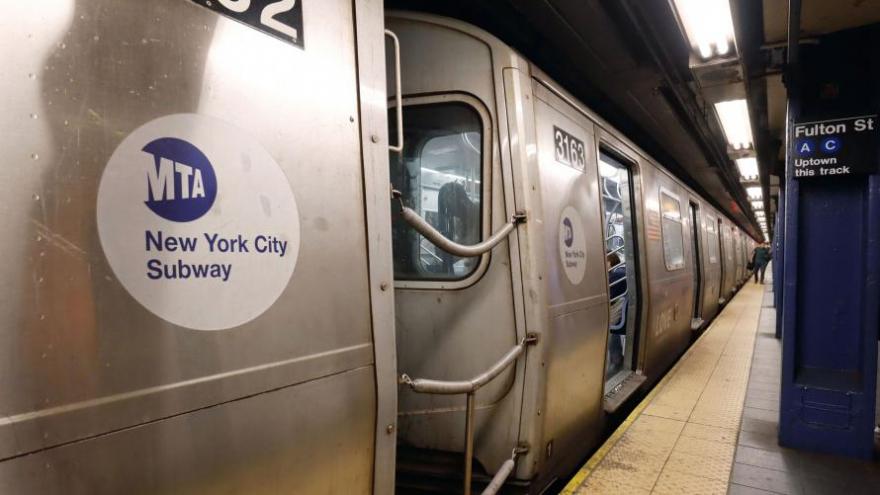 A 62-year-old man suffered minor injuries after being pushed onto the subway tracks at the Fulton Street subway station in Lower Manhattan, pictured here, on June 16, 2021, in New York, the New York Police Department said.

(CNN) -- After yet another person was pushed onto New York City subway tracks over the weekend, the head of the city's transit agency is urging people to stay away from the edge of platforms across a sprawling system where the mayor has acknowledged people do not feel safe as crime rises citywide.

"These incidents are unacceptable and have to stop," Lieber said in a statement.

A 62-year-old man suffered minor injuries Sunday morning after he was pushed onto the subway tracks at the Fulton Street subway station in Lower Manhattan, the New York Police Department said. The man, who hasn't been identified publicly, made contact with the lead train car while he was on the tracks, police said. He treated at a hospital for a leg laceration.

It wasn't immediately clear if the attack was targeted. The NYPD has not made any arrests, and an investigation is underway, a spokesperson said.

"I don't want to tell people that they should stand on subway platforms and feel like they're, you know, in threat of their lives," Lieber told WABC. "But everybody should stand away from the edge of the platform."

Asked about platform screen doors -- as used by subway systems in other countries -- Lieber said there are physical constraints the MTA must consider, like the "ability to maintain ADA accessibility," a reference to the Americans with Disabilities Act.

"Literally, the structure of our very old, 100-year-old stations don't accommodate it," Lieber said. "And there's some real ventilation issues: How will we ventilate -- for fire code safety and for human comfort -- in that event?"

Sunday's incident follows the death of Michelle Alyssa Go, an Asian American woman who was pushed in front of a Times Square subway train on January 15. Go's death has bolstered efforts to raise awareness of crimes against Asian Americans and prompted authorities to reexamine safety at subway stations.

A man has been charged with second-degree murder in connection with Go's death, which shocked residents of a city that has seen crime rise in the pandemic and renewed calls for politicians to address a burgeoning homeless crisis.

On New Year's Day, a good Samaritan died while trying to help a man who fell onto subway tracks during a gang assault. Around 2:40 a.m., people approached a 38-year-old man on the southbound B/D train platform in the Fordham Road subway station in the Bronx, the NYPD said. The gang "displayed a knife and began assaulting him," and at some point, the man landed on the subway tracks, police said. It is unclear if he fell or was pushed.

A 36-year-old witness went down to the tracks to help the assault victim and was "subsequently struck by the oncoming train, causing his death," police said. The train didn't strike the assault victim, according to police, and he was treated for a fractured arm.

Mayor Eric Adams last week said he shares New Yorkers' anxieties "when I'm moving throughout our transportation system," adding his administration will work to drive down crime in the subways at a time when other major US cities are experiencing a spike in crime during the pandemic.

"We know we have a job to do. We're going to do both: We're going to drive down crime, and we going to make sure New Yorkers feel safe in our subway system, and they don't feel that way now," said Adams, who took office this month.

Though not near the rate of the early 1990s, crime in New York has been on the rise in recent months. In November -- the most recent month for which the city has released data -- the crime rate increased by 21.3% from the same period last year, according to the NYPD.

Adams' general plan to combat gun violence is set to be unveiled Monday, with more details revealed in coming weeks, a city official said. Announcement of the plan was expedited after an NYPD officer was killed while responding last week to a domestic incident, the official said.