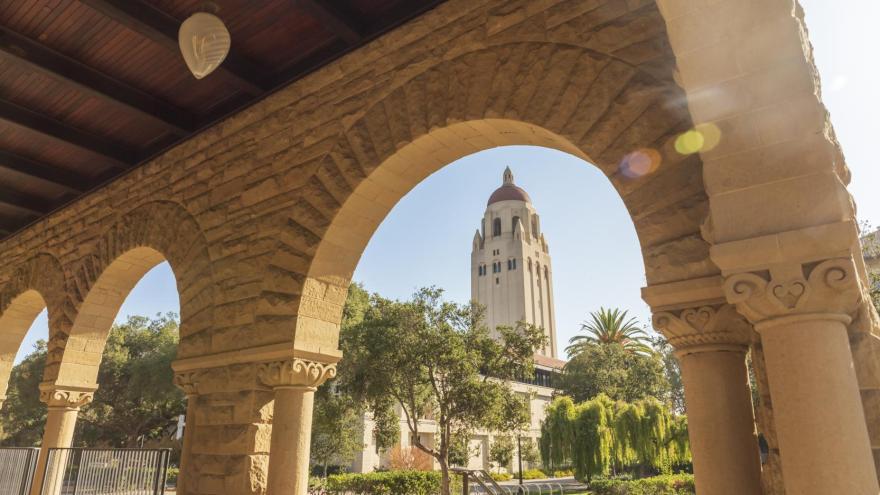 Stanford University apologizes for limiting Jewish student admissions during the 1950s. The university is pictured here on October 2, 2021.

(CNN) -- Stanford University apologized Wednesday for limiting Jewish student admissions during the 1950s and then denying such a practice existed in the years that followed.

The apology comes after a task force appointed by the university's president in January completed an archive-based report that found that Stanford took actions to suppress its admission of Jewish students.

"On behalf of Stanford University I wish to apologize to the Jewish community, and to our entire university community, both for the actions documented in this report to suppress the admission of Jewish students in the 1950s and for the university's denials of those actions in the period that followed," Stanford President Marc Tessier-Lavigne wrote in a letter to the community. "These actions were wrong. They were damaging. And they were unacknowledged for too long."

The report is part of an effort by Stanford to confront its institutional history that has also included renaming some campus buildings and streets in recent years, according to Tessier-Lavigne.

The university said it will "acknowledge and apologize" as well as "explore, educate, and enforce" recommendations made by the task force to address the matter.

The report focuses on a 1953 university memo by university administrators who expressed concern about the number of Jewish students being admitted to Stanford, as well as a drop in enrollment from two Southern California high schools known to have large Jewish populations: Beverly Hills High School and Fairfax High School.

As word spread among California Jews that Stanford may be limiting the number of Jewish students it admits, university leadership denied the claims and "took advantage of the literal definition of 'quota,'" authors of the report wrote.

"In letters and in public, campus leadership asserted that Stanford did not have a 'quota,' while top members of the administration had full knowledge of the policies in place that were designed to allow the Director of Admissions to act to suppress the number of Jewish students admitted," the report says.

School officials are unclear how long the "appalling antisemitic activity" lasted or whether it extended to other schools or students, Tessier-Lavigne said. "However, the report articulates how this effort to suppress Jewish enrollments had long-lasting effects and dissuaded some Jewish students from applying to Stanford in later years," he said.

"This ugly component of Stanford's history, confirmed by this new report, is saddening and deeply troubling," Tessier-Lavigne said. "As a university, we must acknowledge it and confront it as a part of our history, as repellent as it is, and seek to do better."

In addition to its investigation, the task force made a number of recommendations for enhancing Jewish life on campus. They include providing anti-bias education on antisemitism, and placing greater attention to Jewish religious observances in university scheduling, housing and dining.

'The impact lasted for decades'

The report says that while it may have been a "fairly limited action" in the '50s, it had far-reaching effects on the size of Stanford's Jewish population and on the school's reputation among California Jews.

The impact on Beverly Hills High School and Fairfax High School was "immediate and striking." The number of students the two schools sent to Stanford dropped precipitously in the years that followed the 1953 memo, the task force found.

"How long this practice remained in place is also unknown. If it was ever committed to writing, those memos did not survive. But the impact lasted for decades, largely refracted through the understanding, popular among Jews in Southern California, that Stanford limited the number of Jewish students it would admit," the report says.

Tessier-Lavigne in his letter said it would be natural to ask whether anti-Jewish bias still exists in Stanford's admission process today, and that "We are confident it does not."

After the president's apology, Rabbi Jessica Kirschner sent a letter to Hillel, a Jewish student organization, praising Stanford for commissioning the report, apologizing after its findings and committing to enact the task force's recommendations.

"On behalf of Hillel at Stanford, I want to lift up President Tessier Lavigne's apology as a notable example of institutional teshuvah -- an acknowledgment of past wrongdoing and clear and specific commitment to ensure a supportive and bias-free experience at Stanford. This is what we want for all members of the Stanford community," Kirschner said.