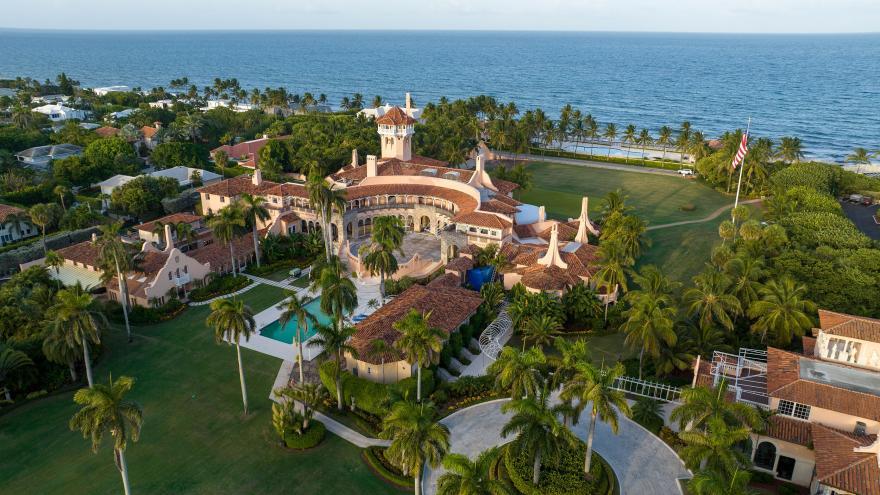 Seen here is an aerial view of former President Donald Trump's Mar-a-Lago estate on August 10, in Palm Beach, Florida. A Brooklyn-based federal judge was selected on September 15 to review the materials seized from Mar-a-Lago.

(CNN) -- A Brooklyn-based federal judge was selected on Thursday to serve as an independent arbiter to review the materials seized in the FBI's search of former President Donald Trump's Florida home.

The special master will be Senior Judge Raymond Dearie, who was put forward as a possible candidate for the special master role by Trump, who had sued in court to obtain the review. The Justice Department also endorsed Dearie's appointment.

US District Judge Aileen Cannon also rejected the Justice Department's bid to resume its criminal investigation into classified documents seized at Mar-a-Lago last month. The denial sets the stage for the department's dispute with Trump over the search to move quickly to an appeals court and potentially the US Supreme Court.

An intelligence community review of the documents has been paused since last week when Cannon ordered the criminal investigation to stop for the moment. DOJ says the two reviews cannot be separated and plans to appeal.

The denial of the government's request was the latest example of Cannon, nominated by Trump in 2020, showing extreme skepticism to the Justice Department's handling of records it says should be in the government's hands because they own them.

Cannon gave the special master a deadline of November 30 to finish his review of potentially privileged documents.

The schedule delays the review's ending until after the midterm congressional elections -- essentially guaranteeing the Mar-a-Lago investigation will move slowly for the next two months, unless a higher court steps in. The appeals process could mean the fight over the documents goes on into the 2024 presidential election cycle.

Dearie sits on the district court for the Eastern District of Brooklyn, where he has taken senior status -- meaning his workload has been lightened significantly as he nears the end of his time on the federal bench.

He was appointed as a judge by Ronald Reagan in 1986 and was for a time the chief judge of the Brooklyn-based district court. He also served a seven-year term, concluding in 2019, on the US Foreign Intelligence Surveillance Court.

In his role as a FISA judge, Dearie was one of the judges who approved one of the Justice Department's request to surveil former Trump campaign foreign policy adviser Carter Page as part of the federal inquiry into Russia 2016 election interference.

The department's process for securing FISA warrants for Page was riddled with errors and sloppiness, a DOJ inspector general review later found. The IG's review pointed to omissions and mistakes in the FBI's court filings supporting the FISA applications, including in filings submitted to Dearie.

Trump has railed over how the FISA warrants against Page were obtained, making his recommendation of Dearie to review the Mar-a-Lago search notable. Legal observers across the ideological spectrum, including vocal Trump critics, also backed the choice.

Cannon on Thursday also rejected several other requests the Justice Department made about how the special master review should proceed. She shoved off the Justice Department's argument about the national security risks that would come with pausing the criminal investigation into the classified documents -- in a break with how judges usually view such claims by the government.

However, she also seemed to create a vague and undefined loophole for the Justice Department to take some steps in the criminal investigation if those steps were necessary and inextricable from the assessment that the intelligence community on the national security risks around disclosure of the documents.

That possible wiggle room aside, her order -- if left intact by higher courts -- stands to slow down the criminal investigation by at least several weeks.

In her ruling, Cannon said she was unconvinced that pausing the criminal investigation's review of the documents would cause irreparable harm.

The department argued that the intelligence community's assessment of national security risks -- which Cannon previously said could go forward -- was being impeded by the hold she had put on the criminal probe's use of the documents.

"First, there has been no actual suggestion by the Government of any identifiable emergency or imminent disclosure of classified information arising from Plaintiff's allegedly unlawful retention of the seized property. Instead, and unfortunately, the unwarranted disclosures that float in the background have been leaks to the media after the underlying seizure," she wrote.

She also rejected the argument the department had made that the intelligence community assessment could not be decoupled from the criminal probe.

While it may be "easier" Cannon said, "for the Government's criminal investigative work to proceed in tandem with the Security Assessments," the Justice Department had not convinced her that the intelligence community's assessment was being impeded by it.

Pointing to examples that prosecutors had offered of how the national security assessment would rely on the criminal probe's work, Cannon said that the prosecutors "do not firmly maintain that the described processes are inextricably intertwined, and instead rely heavily on hypothetical scenarios and generalized explanations that do not establish irreparable injury."

Still, while she rebuffed the department's claims that the two reviews were inseparable, she seemed to acknowledge that there were situations in which the intelligence community assessment might rely on investigative activity happening in the criminal probe, and she vaguely seemed to give the Justice Department wiggle room to take those steps.

She did not spell out what sort of criminal investigative activity would be acceptable for that purpose, saying only in a footnote she would trust the government to decide when the tasks of the intelligence review and criminal probe were truly "inextricable."

Denying a DOJ request that the special master view conclude by mid-October, Cannon set a November 30 deadline for the process -- putting it on timeline closer to the 90 days the Trump team proposed be given to the review.

The judge however sided with the DOJ in how the special master is compensated, ordering that Trump pay the costs, rather than split it 50-50 with Justice Department, as Trump had proposed.

Trump filed the lawsuit seeking the special master two weeks after the Justice Department executed the search on his Florida residence and resort. Prosecutors are investigating at least three potential crimes: violations of the Espionage Act, illegal handling of government records and obstruction of justice.

During the search, according to court filings, investigators seized more than 100 documents marked as classified, which were obtained after Trump's representatives were served a subpoena in May demanding they return to the government all such documents. When the FBI traveled to Mar-a-Lago in June to collect the documents, one of his lawyers signed a certification asserting the subpoena had been complied with.

Trump, in his filings in the special master case, argued that his constitutional rights had teen trampled upon with the August 8 search, though Cannon herself had previously said she did not agree that the judicially authorized search amounted to a "callous disregard" of the former President's rights.

According to her order on September 5 initially granting Trump's request for a special master review, Cannon decided it was necessary to bolster public trust in the search and because Trump, as a former president, faced increased risks of reputational harm if an indictment was wrongfully brought against him.

Trump claimed on Hugh Hewitt's radio show Thursday that he declassified the government records that were taken to Mar-a-Lago, but that's not an argument that he's made in any legal setting.

Cannon's order on Thursday also raised doubts all the documents with classification markings were actually classified.

"The Court does not find it appropriate to accept the Government's conclusions on these important and disputed issues without further review by a neutral third party in an expedited and orderly fashion," she said, referring to the Justice Department's assertions that the documents are presumably classified and that Trump could not possibly have a possessory interest in any of them.