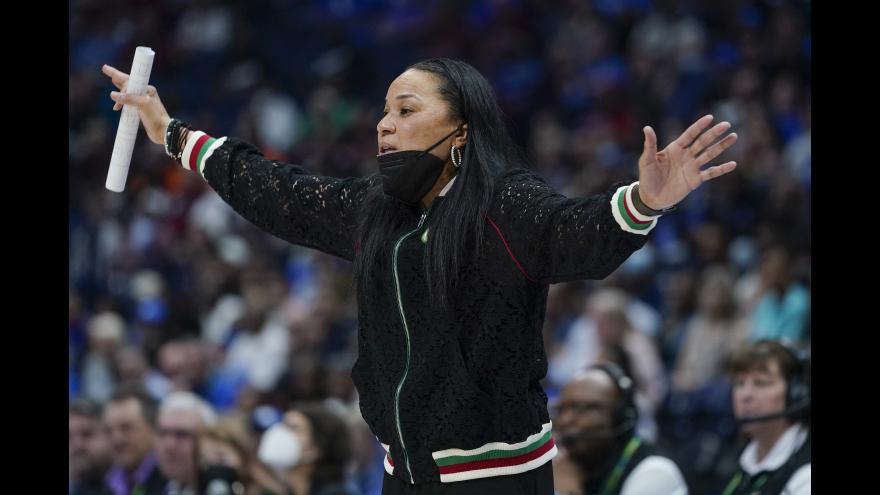 "As a head coach, my job is to do what's best for my players and staff," Staley said in a statement. "The incident at BYU has led me to reevaluate our home-and-home, and I don't feel that this is the right time for us to engage in this series."

Richardson said BYU officials did not act quick enough to stop the racist harassment she and other Black players were subject to during a match last week. Richardson tweeted that she and some of her teammates "were targeted and racially heckled throughout the entirety of the match. The slurs and comments grew into threats which caused us to feel unsafe."

BYU issued an apology the day after the game and said it banned a fan.

South Carolina was scheduled to open its season at home against BYU on November 7. The Gamecocks said they are looking for another opponent for the season opener at Colonial Life Arena.

BYU said it is "extremely disappointed" with the decision.

"We are extremely disappointed in South Carolina's decision to cancel our series and ask for patience with the on-going investigation," BYU women's basketball team said in a statement on Twitter. "We believe the solution is to work together to root out racism and not to separate from one another. #LoveOneAnother."

Both teams were set to play each other at the Utah university next season.

BYU said it has no proof that the fan banned used a racial slur. The investigation is ongoing.

"We are still investigating fan behavior as well as investigating our own response to the reported behavior," Jon McBride, BYU associate athletic director said in a statement to CNN on Saturday. "The individual who was banned was the person identified by Duke as using racial slurs. However, we have been unable to find any evidence of that person using slurs in the match. We continue to investigate that specific situation."

On Thursday, BYU athletic director Tom Holmoe wrote an opinion piece for the Deseret News stating that the school is "committed to zero-tolerance of racism" and will be defined by its response to the racial incident.

"Let me be clear where BYU stands on this issue: racism is disgusting and unacceptable," he wrote. "We have worked to understand and follow-up on Rachel's experience with sincere commitment and ongoing concern. To say we were extremely disheartened by her report is not strong enough language. BYU and BYU Athletics are committed to zero-tolerance of racism. Any fan found engaging in racist insults will be banned from our athletic venues.

Holmoe added: "While some will try to define BYU by this incident, we will ultimately be defined by how we respond. The BYU I know and love rejects racism."