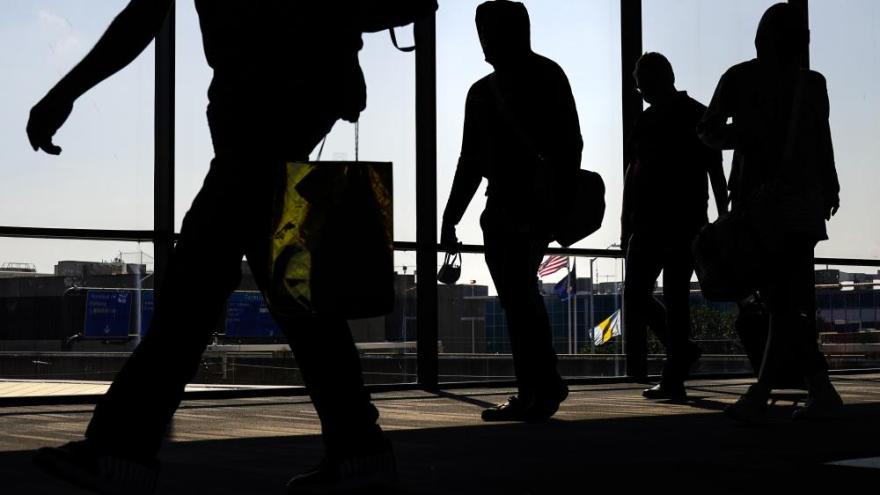 Some senators on Wednesday urged the Department of Transportation to increase airline passengers' compensation for canceled and delayed flights.

(CNN) -- Three Democratic senators urged the Department of Transportation on Wednesday to increase airline passengers' compensation for canceled and delayed flights when the airline is at fault.

The pressure campaign comes on the eve of Thanksgiving, as airlines prepare for near pre-pandemic levels of travel.

In a letter to Transportation Secretary Pete Buttigieg, Democratic Sens. Maria Cantwell of Washington, Edward Markey of Massachusetts and Richard Blumenthal of Connecticut wrote the airlines should be responsible for passengers' "secondary costs" when they cancel or "significantly" delay a flight.

"The refunds rule should require airlines to cover secondary costs -- such as hotel rooms, food and drink, and transportation to-and-from the airport -- when an airline, due to a problem within its control, cancels or significantly delays a flight," wrote the senators.

Airlines have paid more than $600 million in refunds to hundreds of thousands of passengers for canceled or changed flights since the start of the Covid-19 pandemic, according to the Department of Transportation.

But federal regulators say that some airlines have skirted the rules. The department has issued $7.25 million in fines against six airlines for "extreme delays in providing those refunds to passengers," said Buttigieg this month. That brings the total assessed fines for 2022 to $8.1 million -- a record in civil penalties for the department's consumer protection program.

In August, major airlines said they would provide food and lodging if they caused a cancellation after Buttigieg pressed them to upgrade their customer service commitments.

The three senators pushed the department to strengthen its proposed rule on ticket refunds for airline passengers even further, noting that domestic airlines have canceled nearly 3% of flights and delayed 21% of flights in the first eight months of 2022, citing data from the Bureau of Transportation Statistics.

"This rulemaking is a critical response to the increase in flight cancellations and delays during the coronavirus pandemic, resulting in a record number of consumer complaints about the refund process," wrote the senators.

Katherine Estep, a spokesperson for Airlines for America, the industry's leading trade group, said that their members "fully comply with all federal laws and regulations regarding cash refunds." Estep added that in the first nine months of 2022, US passenger airlines "issued $8.3 billion in cash refunds, more than all of refunds issued in 2021."