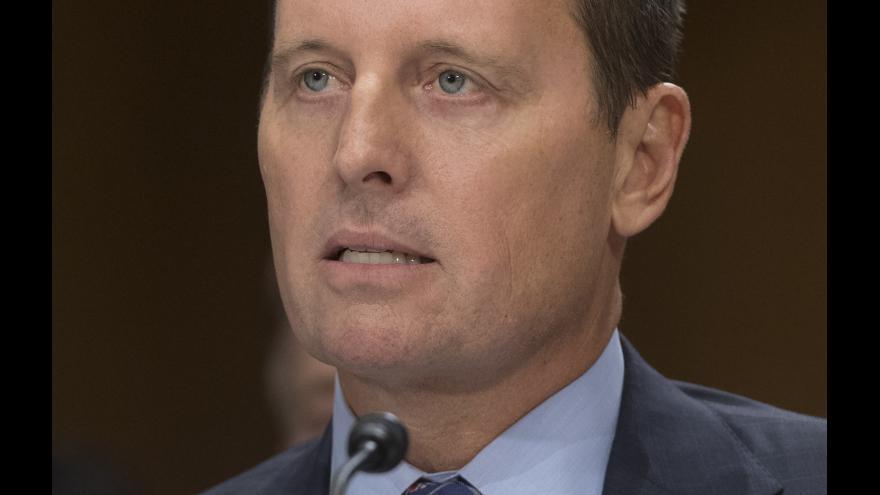 Senate Republicans are giving a tepid reaction to President Donald Trump's decision to appoint US Ambassador to Germany Richard Grenell as acting director of national intelligence.

While Grenell received praised from House Republican leaders, Senate Republicans have largely declined to speak out in support of the President's pick for intelligence chief, after Trump announced Wednesday evening that Grenell would replace outgoing acting Director of National Intelligence Joseph Maguire.

Republican Sen. John Boozman of Arkansas said Thursday he would like Trump to quickly appoint a permanent director of national intelligence, saying it's important to have someone confirmed by the Senate in that sensitive post.

"Certainly I would like to have people in place that are Senate confirmed," he told reporters in the Capitol after overseeing a brief pro forma session of the Senate.

Asked if Trump should quickly name a full-time director, Boozman said yes. "I think that would be appropriate."

In the meantime, Boozman, who as a member of the Appropriations Committee has oversight of spending by the intelligence agencies and the State Department, said he doesn't have any feelings about Grenell being in the post temporarily, which does not require Senate confirmation.

"I don't know that much about him, to be honest," Boozman said, noting that he had just returned from a long trip abroad with other lawmakers where he visited Munich for a security conference and Iraq. Boozman voted in 2018 to confirm Grenell for his ambassadorship but said, "that's a different level of expertise" than the DNI post.

Grenell, who is a staunch Trump ally, was confirmed as ambassador to Germany in 2018 by a 56-42 vote, but congressional sources say that confirmation as director of national intelligence would have been a whole different ballgame — and he likely could not have been confirmed. Grenell tweeted Thursday making clear that he was appointed only as acting DNI, saying that the President "will announce the Nominee (not me) sometime soon." Grenell will remain as ambassador to Germany while serving as intelligence chief.

Most lawmakers are out of Washington this week during the President's Day recess. Senate Majority Leader Mitch McConnell did not respond to a request for comment about Grenell's appointment, while Senate Intelligence Chairman Richard Burr, a North Carolina Republican, declined to comment. Several other Republicans on the Senate Intelligence Committee also did not comment Thursday, including Sen. John Cornyn of Texas, Susan Collins of Maine and Ben Sasse of Nebraska.

"If you're ambassador for some time in a country like Germany, you have a lot of exposure to intel activities and daily briefings and other things and he's a very smart, capable guy," Blunt said.

Democrats decried Grenell's selection, arguing he was a partisan and did not have relevant intelligence experience for the role, which was created to in the aftermath of the September 11, 2001, terrorist attacks to help improve coordination in the US intelligence community.

"Sadly, President Trump has once again put his political interests ahead of America's national security interests by appointing an Acting Director of National Intelligence whose sole qualification is his absolute loyalty to the President," House Speaker Nancy Pelosi said in a statement.

"The President has selected an individual without any intelligence experience to serve as the leader of the nation's intelligence community in an acting capacity," said Sen. Mark Warner of Virginia, the top Democrat on the Senate Intelligence Committee. "At a time when the integrity and independence of the Department of Justice has been called into grave question, now more than ever our country needs a Senate-confirmed intelligence director who will provide the best intelligence and analysis, regardless of whether or not it's expedient for the President who has appointed him."

There have been tensions in the Senate over the director of national intelligence post since Trump tried last year to appoint Rep. John Ratcliffe, a Texas Republican on the House Intelligence Committee who withdrew amid questions about his resume as a prosecutor and lack of intelligence experience. Many Senate Republicans were cool to Ratcliffe's selection, and he withdrew in the face of what would have been a difficult confirmation fight, before becoming a key GOP lawmaker defending Trump during the House impeachment inquiry.

Last week, The New York Times reported that Trump was considering Rep. Chris Stewart Utah, another House Republican on the Intelligence Committee, for the DNI role. Burr told CNN last week that he would comment on Stewart if he was nominated, but also noted it had been difficult for Trump to confirm nominees to the position.

"The President can nominate whoever he wants to. I dare say it's very difficult to get a DNI nominee through the confirmation process," Burr said.

"President Trump made a great choice to name @RichardGrenell as America's next Acting Director of National Intelligence. Ric has a proven track record of fighting for our country, and now, he will work every day to make sure Americans are safe," House Minority Leader Kevin McCarthy tweeted.

"Richard Grenell has effectively represented the United States and our interests abroad and I look forward to working with him to protect our national security in his new role as Acting Director of National Intelligence," McCaul said in a statement.