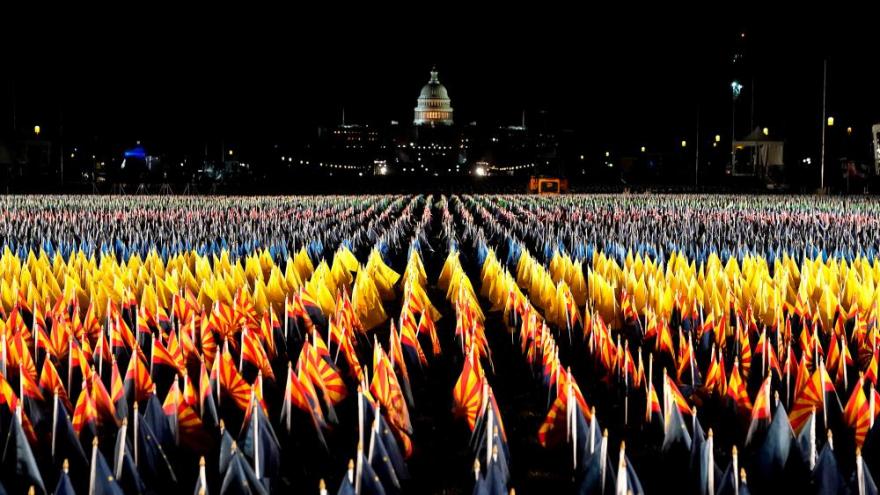 Biden's inaugural guest list was already limited due to the pandemic. Heightened security threats made it even more dangerous, so instead of spectators, he'll be sworn in before 191,500 flags.

(CNN) -- Instead of the patriotic crowds that typically fill the National Mall on Inauguration Day, President-elect Joe Biden will be sworn in before hundreds of thousands of American flags.

On Tuesday, the committee illuminated the flags, concentrated in 56 pillars to represent the 50 states and US territories, in a ceremony that took roughly 46 seconds -- in honor of Biden, who this week will become the 46th President of the United States. The public art display reflects "our commitment to an inclusive and safe event that everyone can enjoy from home," the committee said.

Biden's inauguration was already going to be unique given the pandemic. So the President-elect discouraged supporters from attending for their safety.

Then, this month's insurrection at the US Capitol heightened security concerns, as federal officials warned that extremists are more emboldened by the violent events of January 6 to carry out their own attacks on Inauguration Day and throughout 2021.

Biden's inauguration will be much more intimate than is standard for a presidential inauguration. The Joint Congressional Committee on Inaugural Ceremonies said in December that the ceremony will more closely resemble a State of the Union address, for which members of Congress and the President can invite a limited number of guests.

It'll be no less star-studded than usual, though: Lady Gaga, Jennifer Lopez and Garth Brooks, among others, are expected to perform Wednesday.

The events will be broadcast on most major TV networks and will stream online from the Presidential Inaugural Committee's site.