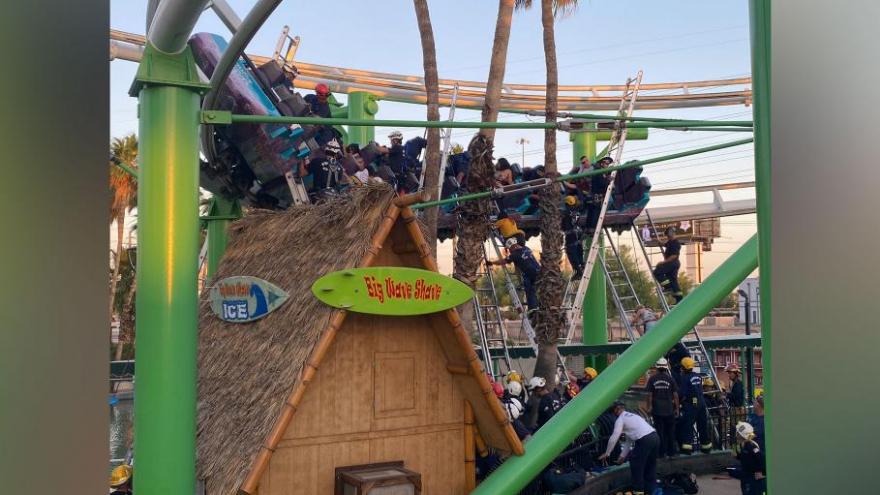 Firefighters lowered the riders off the stalled roller coaster using a High Angle Belay System on Saturday in Phoenix, Arizona.

The Desert Storm ride at Castles N' Coasters theme park stalled along a sharply angled curve, according to photos from Phoenix Fire and Glendale Fire departments.

Fire rescue teams then arrived to the coaster and used a High Angle Belay System to safely lower the passengers to the ground, Phoenix Fire said. Photos from the fire departments show at least seven ladders being used and about 15 firefighters on the scene.

Phoenix Fire Capt. Todd Keller said the passengers were rescued one at a time over the course of a couple hours using a cinch rescue collar and a pick-off harness. No one was injured.

"A couple of them were shaken up, but overall they were in good spirits," he told CNN affiliate KTVK/KPHO.

Joseph Almaraz, a 12-year-old who was stuck on the ride, told KTVK/KPHO he was frightened when firefighters unstrapped him and brought him down.

"It was scary because we didn't go down one ladder, we had to jump from ladder to ladder," he said.

The park's website bills the ride as one of its top attractions: "Test your senses and courage as you challenge the excitement of the vertical drops, spins, and flips of the awesome Desert Storm Roller Coaster."