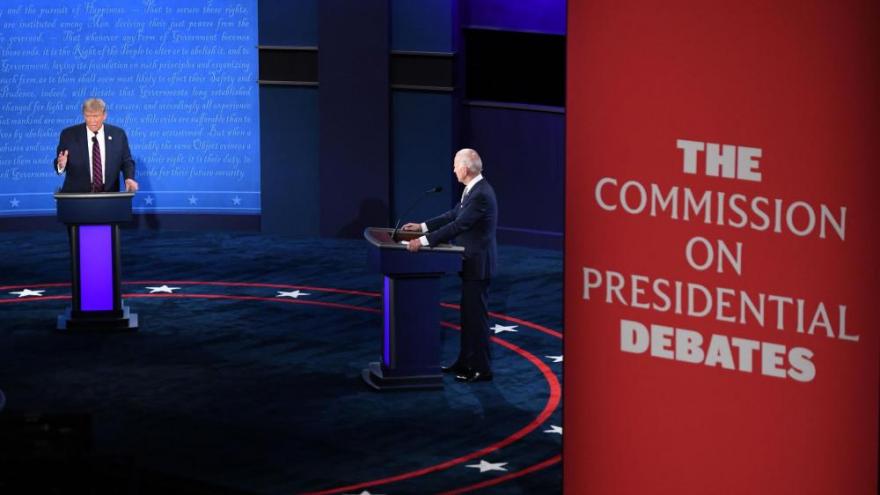 (CNN) -- The Republican National Committee said Thursday in a letter to the Commission on Presidential Debates that it is prepared to "prohibit future Republican nominees from participating in CPD-sponsored debates" unless the commission makes a number of significant changes to its procedure.

The letter, which was first reported by The New York Times, was signed by Republican National Committee chair Ronna McDaniel. It was sent to commission co-chairs Frank J. Fahrenkopf and Kenneth Wollack, is the latest in a back-and-forth between the two groups over Republican accusations that the commission is biased.

CNN was first to report in June that McDaniel, in another letter to the commission, threatened to advise any future Republican nominee against participating in general election presidential debates unless significant changes are made by the commission.

The latest letter, which was sent on Thursday, escalates those threats and outlines actions the RNC plans to take.

"So long as the C.P.D. appears intent on stonewalling the meaningful reforms necessary to restore its credibility with the Republican Party as a fair and nonpartisan actor, the R.N.C. will take every step to ensure that future Republican presidential nominees are given that opportunity elsewhere," the RNC chair wrote.

If changes are not made, she added, the committee will "initiate the process of amending the Rules of the Republican Party at our upcoming Winter Meeting to prohibit future Republican nominees from participating in CPD-sponsored debates."

McDaniel has also been clearly unhappy with the committee's interactions with the commission, arguing in the letter that the way it responded to Republican concerns was an attempt to "delay any reform until it is too late to matter for the 2024 election."

The Republican National Committee's focus on this is yet another example of Republicans relitigating something that was a top concern for former President Donald Trump.

The commission, once a largely anonymous organization that has organized and hosted presidential and vice presidential general election debates since 1988, drew considerable ire from Trump during the 2020 campaign, with he and his campaign aides often railing about the selected moderators, the commission's decision to hold the second debate virtually during the coronavirus pandemic and the choice to mute each candidate's mic during the final debate after the first contest included considerable interruptions from the then-President.

The commission eventually canceled the second debate after Trump declined to attend a virtual debate despite concerns over his Covid-19 diagnosis.

In an unsigned statement from the Commission on Presidential Debates, the commission said it "deals directly with candidates for President and Vice President who qualify for participation in the CPD's general election debates."

"The CPD's plans for 2024 will be based on fairness, neutrality and a firm commitment to help the American public learn about the candidates and the issues," the statement reads.

The RNC has advocated for a number of changes to the commission, including adopting term limits for its board and prohibiting members from making public comments about any candidates. McDaniel, in an echo of Trump's concerns, has also pushed for more influence on which journalists moderate general election debates, asking the commission for a "transparent criteria for selecting debate moderators that would disqualify individuals from consideration who have apparent conflicts of interest due to personal, professional, or partisan factors."

Moderators were a central issue for Republicans in 2020 -- especially the selection of C-SPAN's Steve Scully to moderate what would have been the second contest.

The Trump campaign attacked Scully for working for Biden roughly four decades earlier, leading the journalist to accidentally publicly reach out on Twitter to Anthony Scaramucci, Trump's short-lived White House communications director. When the outreach frustrated Republicans, Scully said he had been hacked, something he later admitted was not true. C-SPAN then placed Scully on "administrative leave" for lying.

McDaniel has long signaled that advising candidates not to participate in CPD-backed debates would be her next move.

In a statement to CNN in 2021, McDaniel said the "Republican Party needs assurances that the CPD will make meaningful reforms to the debate process by working with stakeholders to restore the faith and legitimacy it has lost."

"If not, as RNC Chairman, I will have no choice but to advise future Republican candidates against participating in CPD-hosted debates," she added.

Jaime Harrison, chair of the Democratic National Committee, slammed his Republican counterpart on Thursday, arguing the back-and-forth shows the GOP committee "would rather hide their ideas and candidates from voters."

"Regardless of the RNC's tantrum, voters can count on hearing from President Biden and Vice President Harris who are proud of their records," Harrison said.

This story has been updated with additional information about the Republican National Committee's letter.