A rare planetary alignment has been in the night sky this month, and there are only a few chances left to see it!

Five planets have lined up in the east-southeast in order from closest to further from the sun - Mercury, Venus, Mars, Jupiter, and Saturn. This phenomenon hasn't happened since 2004 and won't happen again until 2040, so make sure to get out and see it while you can. The alignment lasts through the end of the month.

All 5 planets can be seen all around the globe - no need to travel to see this space event! Check out this Tweet from EarthSky showing a view of the alignment from Spain.

Another great view of the 5 visible planets! Miguel Sala at El Albir Lighthouse in Alicante, Spain, took this image on Friday morning. Thank you, Miguel! ???

Skies will be clear tonight – perfect viewing conditions for the planetary alignment. Tomorrow night will bring a few clouds, but Wednesday will be nice and clear once again. 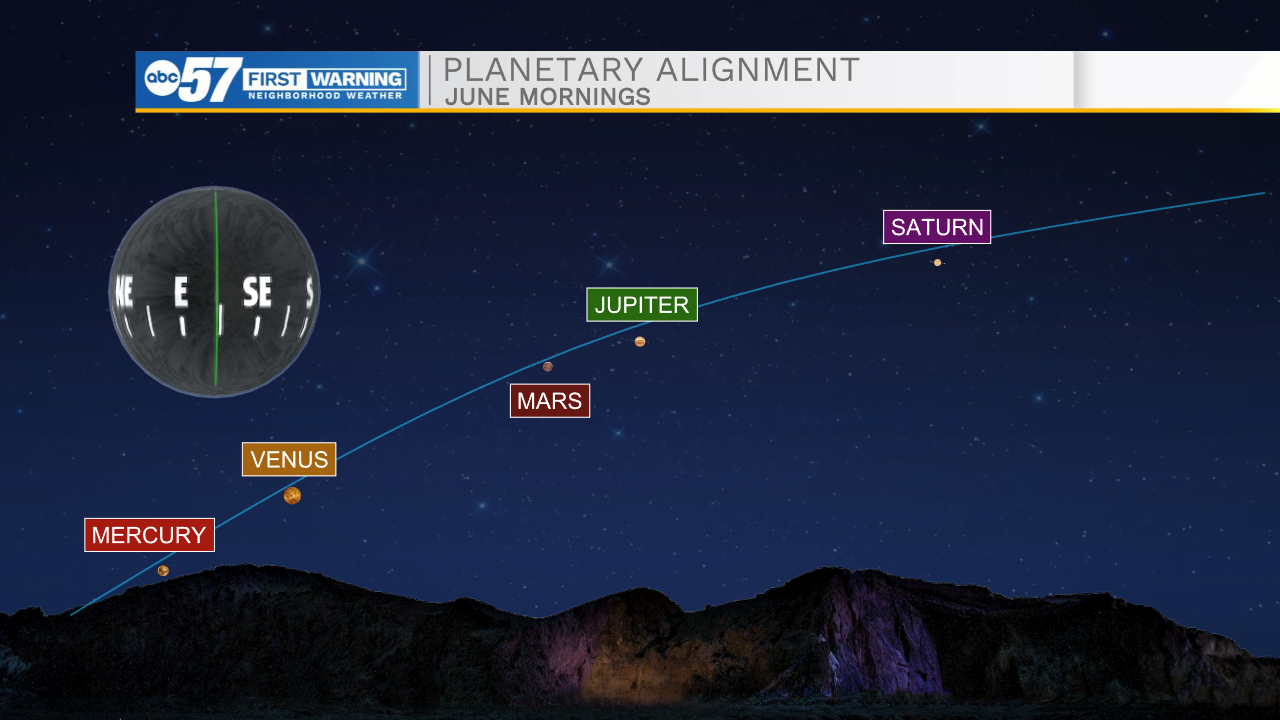 Clear skies and dry conditions have made up a good amount of June, with rainfall amounts over 1" less than what is normal by this time in the month. South Bend should have slightly more than 3.5" of rainfall by today, June 27, but we have only seen 2.23" so far this month.

Southwestern Michigan and northern Indiana have seen between 75-100% of the monthly average rainfall, and the southern half of Michiana has only seen 50-75%.

Portions of Indiana further south near Warren County have seen even less rain, between 10-25% of the average rainfall for the month of June.

The southern half of Michiana is currently under D0 drought conditions with impacts including stress to crops and farmlands, dry and brown grass lawns, and a need for more frequent watering of home gardens.

Some areas further to our south that have seen very little rainfall this month are under D1 drought conditions with impacts including stunted crop growth and low creek/pond levels.

Our next good chance for rainfall in the 10-day forecast will come near the end of this week. Until then, drought conditions are expected to continue, so make sure to keep watering your garden.