Protesters want a pipeline project shut down in Minnesota. Some damaged the site and forced workers out, the company says 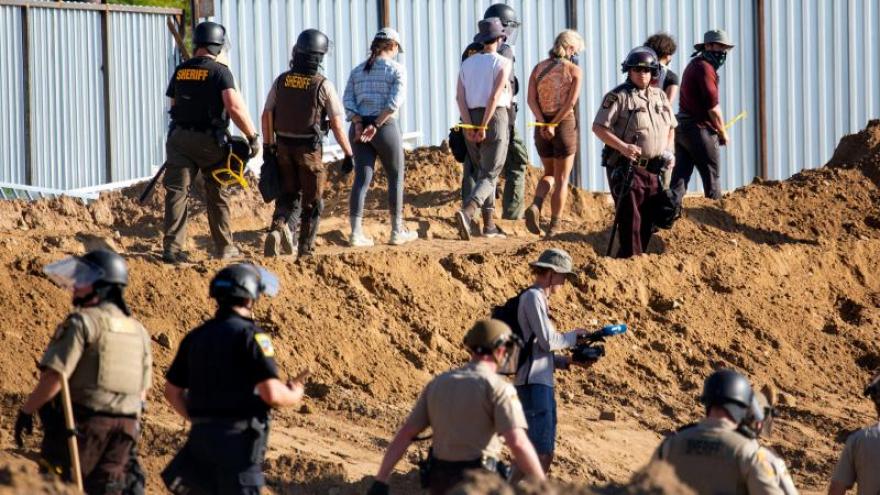 Activists are walked through an Enbridge Line 3 pump station June 7 after being arrested.

(CNN) -- Indigenous leaders and more than 1,000 protesters including actress Jane Fonda marched Monday to the Mississippi River where an Enbridge Energy oil pipeline upgrade project is underway to cross the water in northern Minnesota.

Protesters chained themselves to equipment and blocked entrances at the pipeline construction site, CNN affiliate KVRR reported. New sections of pipeline and added capacity are set to cut through some of the most pristine woods and wetlands in North America.

"There is absolutely no question that President (Joe) Biden can shut down the pipeline," Fonda told the crowd. "There is no question."

Permits for the work -- in an area known as Line 3 -- issued last fall by the US Army Corps of Engineers are the subject of ongoing litigation in state and federal courts, a White House official told CNN on Tuesday.

"The Biden administration is firmly committed to ensuring that under this administration, tribal consultation is robust and tribal concerns are heard," the official said.

Protesters on Monday damaged the work site and prompted the evacuation of more than 40 employees, Enbridge Energy said.

"The destruction done today by protesters is disheartening. We respect everyone's right to peacefully and lawfully protest, but trespass, intimidation, and destruction are unacceptable," the Canadian company said in a news release. "44 workers were evacuated from the site, including ten employees of Native owned contractor Gordon Construction from the White Earth Reservation."

There were about 200 arrests, activists from Treaty People Gathering tweeted, though the Hubbard County Sheriff's Office did not immediately confirm the tally. Actress Taylor Schilling also was among those in the protest crowd.

"People here are going to bear the biggest front of this pipeline. This nation needs to end its dependence on fossil fuels. But more importantly, it needs to honor its agreements it made long ago with Indigenous people, and I am here to support that," Schilling told KVRR.

Enbridge's multi-billion dollar project involves upgrading existing infrastructure on Line 3, the company has said. Overall, the pipeline dates to the 1960s and extends about 1,100 miles from Edmonton, Alberta, to Superior, Wisconsin.

"Line 3 is not like the Keystone XL pipeline," Enbridge Chief Communications Officer Mike Fernandez told CNN in March, referring to a planned pipeline that Biden killed during his first hours in office.

The Enbridge pipeline "already exists. And it already is an energy lifeline for literally millions of people in the US and in Canada. And the reality is, even as we see great growth in renewables, we're still going to need some fossil fuels 40 years to come."

The Enbridge project workforce includes more than 500 Native workers, the company has said.

"So far protests have had relatively little impact on construction which is on track across five different construction zones working simultaneously along more than 330 miles replacing Line 3 in northern Minnesota. The project is on schedule to be complete and in service in the fourth quarter of this year," Enbridge said in its release.

Prior protests at the site led to more than 100 arrests, tribal attorney and activist Tara Houska told CNN in March.

"They seem to think that it's going to deter us from protecting the land. They are fundamentally missing the point of what water protectors are doing, which is willing to put ourselves our freedom, our bodies, our personal comfort on the line for something greater than ourselves," Houska said.

At one point during Monday's demonstration a Customs and Border Protection helicopter flew at a low altitude over the protesters, according to Minnesota Public Radio. The helicopter's rotor wash kicked up a large cloud of dirt, dust and debris.

The helicopter made multiple passes over the site, MPR reported.

"CBP's headquarters is investigating the facts to determine precisely what occurred and whether the actions taken were justified," a CBP spokesperson told CNN. "All appropriate actions will be taken based on the facts that are learned, including with respect to the incident itself as well as the agency's applicable policies and procedures."

The helicopter was brought in to issue a dispersal order, said the Northern Lights Task Force, the law enforcement collaborative overseeing the police response, in a statement on Facebook. "The idea was to provide the order in a manner that everyone would be able to hear."

"Unforeseen to local law enforcement and due to the extremely dry conditions, dust kicked up in the area," the task force wrote. "As soon as helicopter staff saw what was happening, they immediately left the area to ensure no further issues would be caused. This was not an intentional act to cause discomfort or intended as a dispersal mechanism."

The Biden administration is "aware of the situation with the helicopter and we fully support the right for people to peacefully protest," the White House official said.