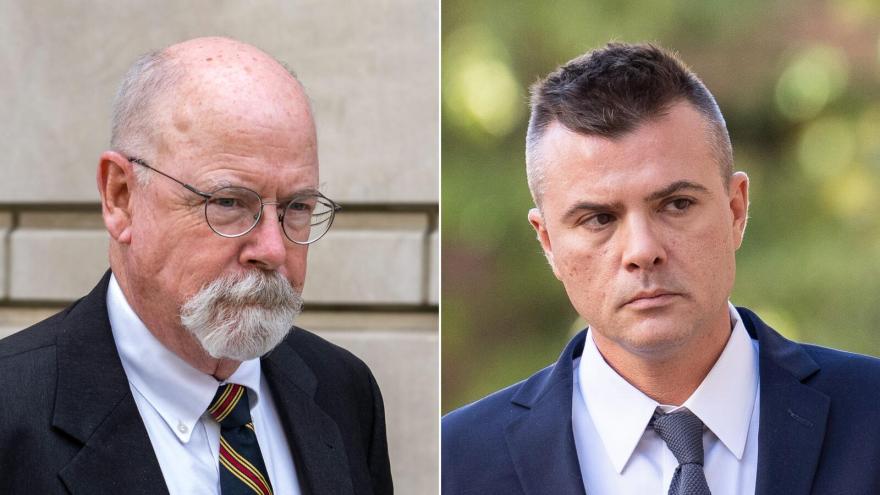 Igor Danchenko (right), the primary source for the infamous Trump-Russia dossier, was acquitted on October 18 of four counts of lying to the FBI in a defeat for special counsel John Durham (left).

(CNN) -- Igor Danchenko, the primary source for the infamous Trump-Russia dossier, was acquitted Tuesday of four counts of lying to the FBI in an embarrassing defeat for special counsel John Durham.

Durham has taken two cases to trial, and both have ended in acquittals. After more than three years looking for misconduct in the FBI's Trump-Russia probe, Durham has only secured one conviction: the guilty plea of a low-level FBI lawyer, who got probation.

The jury returned not guilty verdicts on all charges against Danchenko, a Russian expat and think tank analyst who provided the bulk of the material for the anti-Trump dossier. Durham initially charged Danchenko with five counts of lying to the FBI, but a judge threw out one of the charges on Friday.

The verdict means jurors weren't persuaded by Durham's allegations that Danchenko lied to the FBI about his contacts with a Belarusian-American businessman who was a possible source for the dossier. The largely discredited dossier was a collection of unverified and salacious allegations compiled by retired British spy Christopher Steele, whose dirt-digging was indirectly funded by Hillary Clinton's campaign in 2016.

In many ways, the verdict is a direct blow to Durham, who personally handled most of the arguments and witness questioning. The proceedings were rocky at times for the special counsel, who lashed out at some of his own witnesses after they ended up providing testimony that helped Danchenko's defense.

"We've known all along that Mr. Danchenko was innocent. We're happy now that the American public knows that as well," Sears told reporters outside the courthouse. "We thank these jurors for their hard work and deliberation in reaching the right decision."

In a statement, Durham said: "While we are disappointed in the outcome, we respect the jury's decision and thank them for their service. I also want to recognize and thank the investigators and the prosecution team for their dedicated efforts in seeking truth and justice in this case."

The week-long trial against Danchenko resurrected many of the 2016 election dramas.

FBI agents described their efforts to corroborate the Steele dossier, which ultimately came up empty. Jurors were shown portions of Steele's memos, which he has previously said weren't ever meant to become public. The dossier's primary allegation -- that there was a "well-developed conspiracy of cooperation" between Donald Trump and the Russians -- repeatedly came up throughout the proceedings.

Durham also used the case to put the FBI on trial, in what could be a preview of his upcoming final report. He zeroed in on the shortcomings and errors of the early Trump-Russia probe -- specifically the bureau's overreliance on the dossier to propel forward some key parts of their burgeoning inquiry.

Danchenko is a Russian citizen but has lived in the US for years with his family. The FBI once scrutinized him as a possible counterintelligence threat, but later paid him as an informant. Durham pressed Danchenko's FBI handler about the possibility that he was a Russian spy. To the contrary, the witness said Danchenko was a treasured FBI informant and suggested that Durham hurt US national security by indicting him.