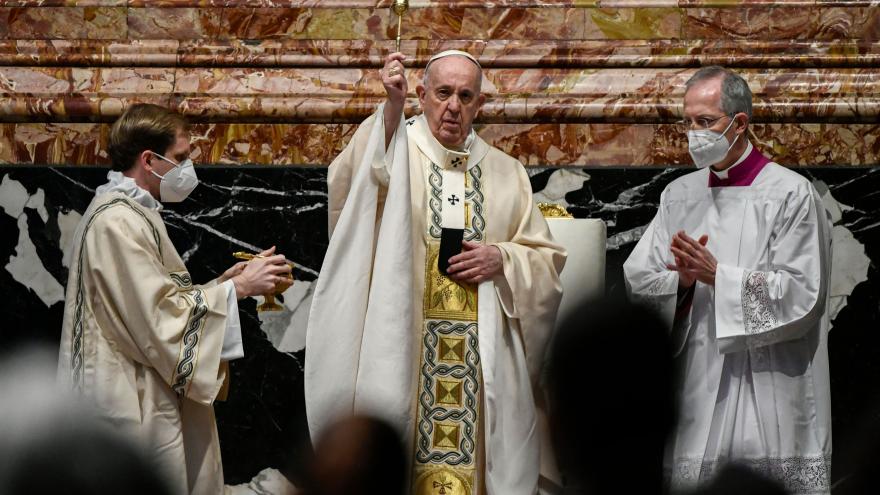 (CNN) -- Pope Francis condemned "scandalous" armed conflicts around the world, naming Myanmar and Tigray among other areas, during his Easter Sunday mass.

Francis led the service in St. Peter's Basilica, in a scaled-back event due to Covid-19 precautions.

He also called for vaccines to be shared with the world's poorest countries.

"The pandemic is still spreading, while the social and economic crisis remains severe, especially for the poor. Nonetheless -- and this is scandalous -- armed conflicts have not ended and military arsenals are being strengthened," the Pope said.

"May the efforts to resolve conflicts peacefully continue, in respect for human rights and the sacredness of life, through fraternal and constructive dialogue in a spirit of reconciliation and true solidarity," he added.

"May the power of the risen Lord sustain the peoples of Africa who see their future compromised by internal violence and international terrorism, especially in the Sahel and Nigeria, as well as in Tigray and the Cabo Delgado region."

He also addressed younger followers, "especially to the young people of Myanmar committed to supporting democracy and making their voices heard peacefully, in the knowledge that hatred can be dispelled only by love."

The spiritual leader of the world's 1.3 billion Roman Catholics made multiple references to the pandemic as he spoke but ultimately focused on a message of hope.

"The risen Christ is hope for all who continue to suffer from the pandemic, both the sick and those who have lost a loved one," he said.

Francis also called vaccines an "an essential tool" in the fight against Covid-19. Concern about vaccine nationalism has been mounting worldwide in recent weeks.

"I urge the entire international community, in a spirit of global responsibility, to commit to overcoming delays in the distribution of vaccines and to facilitate their distribution, especially in the poorest countries," Francis said Sunday.

Restrictions in the Vatican

The event marks the second year in a row that Easter crowds have been prevented from gathering at the Vatican due to the global pandemic.

All papal services this year were attended by about 200 people in the secondary altar of St. Peter's Basilica.

Easter Sunday is the most important day in the Christian liturgical calendar and marks the day Christians believe Jesus rose from the dead after being crucified on Good Friday.

Typically, up to 10,000 members of the faithful fill St. Peter's Square. This year, Francis delivered the blessing from the altar of the basilica to prevent worshipers crowding into the piazza.

At an Easter vigil on Saturday, Francis said he hoped the dark times of the pandemic would end and that people could rediscover "the grace of everyday life."

And on Good Friday he hugged and greeted children who attended a special Stations of the Cross ceremony at the Vatican.

The Pope's travel has been heavily restricted due to the pandemic but he did travel to Iraq last month, for the first ever papal visit to the country.