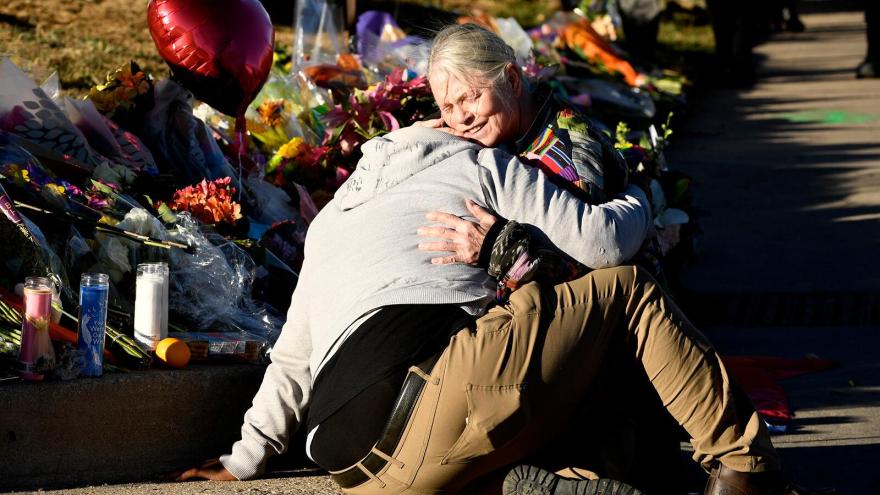 The Colorado Springs Police Department release this photo of Kelly Loving: She/Her, who was killed in the shooting at Club Q.

One of the men who took down the shooter, former Army Maj. Richard Fierro, told CNN: "My daughter (and) wife should have never experienced combat in Colorado Springs, and everybody in that building experienced combat that night, not to their own accord, but because they were forced to."

Fierro, who served four tours in combat zones, said he did what he had to do to protect his family and friends.

Anderson Aldrich is facing five counts of first-degree murder and five counts of a bias-motivated crime causing bodily injury, according to an online docket in El Paso County courts. The district attorney for El Paso County, Michael Allen, said formal charges have not been filed and the ones on the docket are preliminary and might change.

Court records show Aldrich, who is hospitalized, is being held without bail. The docket does not reflect whether Aldrich has retained an attorney. Allen said after Aldrich is moved from a medical facility to jail, he will have an initial appearance by video.

While police haven't released more details about the motive, the massacre at Club Q -- a longtime safe haven for the local LGBTQ community -- has shattered a sense of security.

'I feared I was not going to make it out'

What started as a joyous night of laughter and dancing Saturday devolved into a scene of terror when a gunman walked into the club and immediately opened fire.

"I looked up and saw the outline of a man holding a rifle at the entrance of the club -- probably about 15 feet from me," said Michael Anderson, who was bartending at Club Q in Colorado Springs, Colorado, late Saturday night.

"I ducked behind the bar, and as I did, glass began to spew all around me."

Within seconds, his friend and bar supervisor Daniel Aston was fatally wounded.

Ed Sanders said he saw the gunman, but couldn't make out the words the man uttered as he opened fire by the door.

"It seemed like he was firing from his waist, but it was happening so fast, I didn't really grasp what was going on until I got shot in the leg," Sanders told CNN.

Authorities identified Fierro and Thomas James as two people who took down the gunman.

Fierro, who did three tours in Iraq and one in Afghanistan during his 15 years in the Army, told CNN's John Berman in an emotional interview that he went into combat mode.

Fierro said when he took on the shooter, he pulled him down and as they both went for the gun, the "AR" flew in front of the shooter. Another man, apparently James, helped Fierro with subduing the suspect. He ended up by the gunman's head and Fierro said he told him to push away the gun that had been used.

Fierro said he got the gunman's handgun and started beating him with it.

"I found a crease between his armor and his head and I just started wailing away," he said. "I told him I was going to kill him" because he tried to kill Fierro and his wife and daughter and friends, Fierro said.

Fierro said he wasn't thinking of himself when he chased down the shooter.

"I'm not a hero. I'm just a guy that wanted to protect his kids and wife, and I still didn't get to protect her boyfriend," he said.

Vance was Fierro's daughter's boyfriend, according to Fierro.

Fierro's wife, Jessica Fierro, said their daughter Kassy broke her knee and she herself had bruises to the right side of her body.

Her husband was covered in blood and had injuries to both hands, his knees and ankles, she posted.

Anderson said it took a moment for him to process the horror. When he did, he thought his life was over. "There was a moment in time where I feared I was not going to make it out of that club alive. I have never prayed so sincerely and quickly in my life, as I was anticipating that outcome and afraid of that outcome," Anderson told CNN on Monday.

The gunshots stopped as he was praying, he said.

"I saw what I believe what was probably the gunman lying on the ground, getting beat up and kicked and yelled at by two very brave people," Anderson said.

Police rushed to the scene around midnight and saw the gunman had been subdued, Colorado Springs Police Chief Adrian Vasquez said.

More than a dozen people shot

The tragedy fell on the eve of Transgender Day of Remembrance -- observed in honor of the lives of trans people lost to anti-trans violence and hatred.

According to the legislation, "A person commits a bias-motivated crime if, with the intent to intimidate or harass another person, IN WHOLE OR IN PART, because of that person's actual or perceived race, color, religion, ancestry, national origin, physical or mental disability, or sexual orientation."

Allen, the district attorney, said adding bias-motivated charges where applicable is important to show the community the city does not tolerate that kind of hate.

"We support communities that have been maligned, harassed and intimidated," Allen said.

When asked if the suspect could face federal hate crime charges, US Attorney for the District of Colorado Cole Finegan said his office is still reviewing information.

'I'm scared to be myself'

Colorado Springs, the state's second-most populous city with just under 500,000 residents, is home to military bases and the headquarters for Focus on the Family, the conservative Christian group that says homosexuality and same-sex marriage are sins.

And until recently, Club Q was the only LGBTQ club in the city.

"This space is really the only place in Colorado Springs that the LGBTQ+ community can get together and be ourselves," said Cole Danielson, who worked as a drag king at Club Q.

Just last month, Danielson and his wife celebrated their wedding there.

But now, "our safety as queer people in Colorado Springs is now questioned," Danielson said. "I'm scared to be myself as a trans man in this community."

"This space means the world to me," said Dykes, who has close friends who were killed or critically injured in the shooting.

"The energy, the people, the message. It's an amazing place that didn't deserve this tragedy."

"This was one of the places where I didn't have to worry about looks or people hating me for who I am," they said, adding, "I'm sick to my stomach that the one place where I knew I was safe has been made unsafe."

Taylor was set to perform at the club's Musical Drag Brunch on Sunday. But the mass shooting attack forced Club Q to close indefinitely.

Suspect had been arrested after bomb threat

Police identified the suspect as Anderson Lee Aldrich. He had a long gun during the attack, and two firearms were found at the scene, Vasquez said.

Despite opening fire immediately upon entering the club, the chief said, the gunman's rampage ended within a few minutes because witnesses overpowered him.

"At least two heroic people inside the club confronted and fought with the suspect and were able to stop the suspect," Vasquez said. "We owe them a great debt of thanks."

While Aldrich remains hospitalized, questions have emerged about a previous encounter with law enforcement -- and whether anything could have been done to help prevent the bloodshed.

In June 2021, Aldrich was arrested in connection with a bomb threat that led to a standoff at his mother's home, according to his mother's former landlord and a news release from the local El Paso County Sheriff's Office.

Two law enforcement sources confirmed the suspect in the nightclub shooting and the bomb threat were the same person based on the name and date of birth.

In the 2021 incident, sheriff's deputies responded to a report by the man's mother that he was "threatening to cause harm to her with a homemade bomb, multiple weapons, and ammunition," according to the release.

Deputies called the suspect, but he "refused to comply with orders to surrender," the release said, leading them to evacuate nearby homes.

Several hours after the initial police call, the sheriff's crisis negotiations unit was able to get Aldrich to leave the house he was in, and he was arrested after walking out the front door. Authorities did not find any explosives in the home.

Attempts by CNN to reach Aldrich's mother for comment were unsuccessful.

The two law enforcement sources who said the suspect purchased the firearms also told CNN his arrest over a bomb threat would not have shown up in background checks because the case was never adjudicated, the charges were dropped, and the records were sealed. It is not clear what led to the sealing of the records, they said.

In 2019, Colorado passed a controversial red flag law that allows family members, a roommate, or law enforcement to petition a judge to temporality seize a person's firearms if they are deemed a risk.

When asked why the red flag law wasn't used in Aldrich's case, Colorado Attorney General Phil Weiser said it was "too early to make any decisions" about the case.

"I don't have enough information to know exactly what the officers knew," he said. "What we can do is make sure that we embrace this as a call to action to better educate about this law to make sure that law enforcement understands it and is able to use it to protect lives."

"Hopefully there will be a time when there can be a specific discussion about any prior interaction with law enforcement. And I think those circumstances would cause one to be able to make commentary about potential application of the red flag law but I think it's premature to do so now," he said.