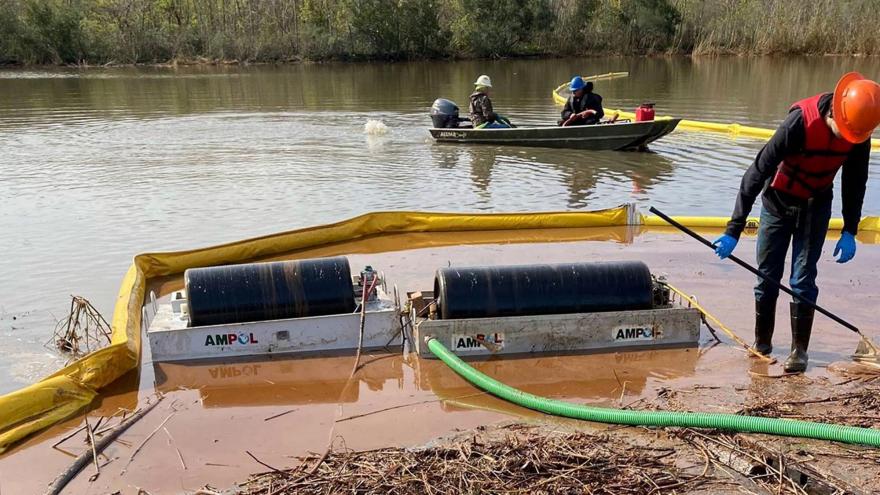 Cleanup work is seen at the site where more than 300,000 gallons of diesel spilled on December 27, 2021, just outside New Orleans.

(CNN) -- A massive cleanup effort is underway after a pipeline ruptured, causing more than 300,000 gallons of low sulfur diesel fuel to spill just outside of New Orleans last month.

The incident occurred on December 27 on a 16-inch diesel pipeline located at the Chalmette Refinery, just east of New Orleans, in St. Bernard Parish, according to federal documents from the Pipeline and Hazardous Materials Safety Administration. PHMSA is charged with oversight for pipeline safety in the United States

Officials say the owner of the line, Collins Pipeline Company, shut down the Meraux Pipeline on the morning of the 27th after reportedly observing pressure gauges and flow meter measurements that indicated there was a leak, documents stated. Later that same day, the pipeline company visually confirmed that the line had ruptured, resulting in a release of low sulfur diesel that surfaced near a levee wall in St. Bernard Parish.

In a statement to CNN, Michael Karlovich, vice president of communications for PBF Energy, said that to date they have recovered more than 320,000 gallons of diesel fuel from the site and the pipeline combined that was subsequently recycled at their refinery.

Collins Pipeline Company is a subsidiary of PBF Energy.

No injuries or fatalities were reported as a result of the rupture; however, thousands of fish, birds and other wildlife were killed.

The rupture of the pipeline comes more than a year after an inspection in October 2020 revealed external corrosion 22-feet long by 25-inches wide near the failure location, according to federal documents.

The root cause of the accident remains unconfirmed at this time. Preliminary reports indicate that the probable cause is likely localized corrosion and metal loss, the Pipeline and Hazardous Materials Safety Administration said in its report.

Karlovich tells CNN that repairs have been made to the ruptured line and operations have been restored.