Pelosi on her husband's recovery: It will take 'a little while for him to be back to normal' 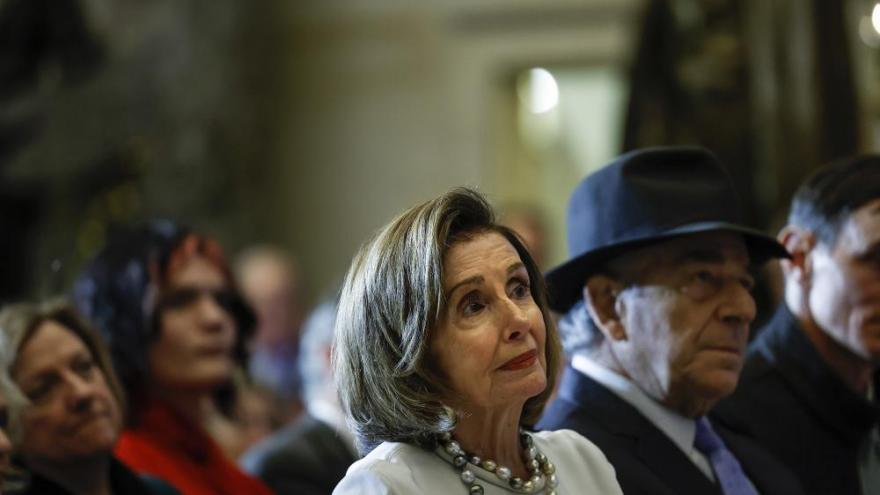 (CNN) -- Former House Speaker Nancy Pelosi reflected on her husband Paul's condition after the violent attack he suffered last year, saying that while he is "doing OK," it will still "take a little while for him to be back to normal."

Nancy Pelosi made the comments in an interview with CNN's Chris Wallace on "Who's Talking to Chris Wallace," which is now streaming on HBO Max and airs Sunday night at 7 p.m. ET on CNN. The California Democrat said that her husband is "very strong" but that the incident has been very "sad for our family" and that it's a situation that has to be taken "one day at a time."

Paul Pelosi was attacked in October with a hammer at the couple's home in San Francisco by a male assailant who was searching for the House speaker, according to court documents. Paul Pelosi had surgery "to repair a skull fracture and serious injuries to his right arm and hands," a spokesman for Nancy Pelosi said in a statement following the incident.

"I feel very sad about it because of what happened, but also more sad because the person was searching for me," Nancy Pelosi told Wallace. "My dear husband, who is not even that political actually, paid the price."

Paul Pelosi made his first public appearance after the brutal attack in December at the Kennedy Center Honors in Washington, DC.

"He's been out a bit because the doctor said he has to have something to look forward to, and so again, one day at a time," Nancy Pelosi said.

Elaborating on her husband's condition and recovery, she said, "He had wounds and all the rest in that on his body. Those took time, but they healed. Tendons, you know all that stuff. But the head is a different thing."

During the interview, Pelosi criticized the chaotic, contentious and drawn-out fight that played out on the House floor to elect Kevin McCarthy speaker now that Republicans have taken back control of the chamber.

Pelosi saw clear differences in how she was able to lock in the votes to be elected speaker in 2019, and McCarthy's election, which went to multiple ballots on the House floor as he struggled to secure the support needed from the GOP Conference before ultimately winning the gavel.

"I wouldn't ask people to go to the floor unless we had the votes. He knew what his, shall we say, obstacles were. They should have been resolved," she said, referring to McCarthy.

McCarthy has argued that Democrats created a "new standard" when they were in the majority by removing GOP Reps. Marjorie Taylor Greene of Georgia and Paul Gosar of Arizona from their committees for inflammatory rhetoric and social media posts. McCarthy has said he would strip Democratic Reps. Adam Schiff and Eric Swalwell, both of California, and Ilhan Omar of Minnesota of their committee assignments.

Asked if she opened the door to that, Pelosi pushed back, saying, "It was clear that their members were a threat to our members. So this is about maintaining safety for our members. The fact that they want to take these people off the committee is philosophical. So, they have the votes, they could take somebody off, but that's for philosophical reasons. That's not the precedent that we set."

Marking the end of an era for House Democrats, the caucus chose Rep. Hakeem Jeffries of New York as its leader to succeed Pelosi. That took place after Pelosi had announced that she would relinquish her leadership post, a role in which she built a legacy as one of the most powerful and polarizing figures in American politics.

With House Democrats now in the minority, Pelosi said that she doesn't miss being speaker.

"No. I sometimes wonder why I don't, but I think that I've done my time," she said. "I loved it. It was a great honor. Imagine, to be speaker of the House, second in line to the presidency, which of course, would never happen, but nonetheless, the prestige of it all. I love my members. I love the institution."