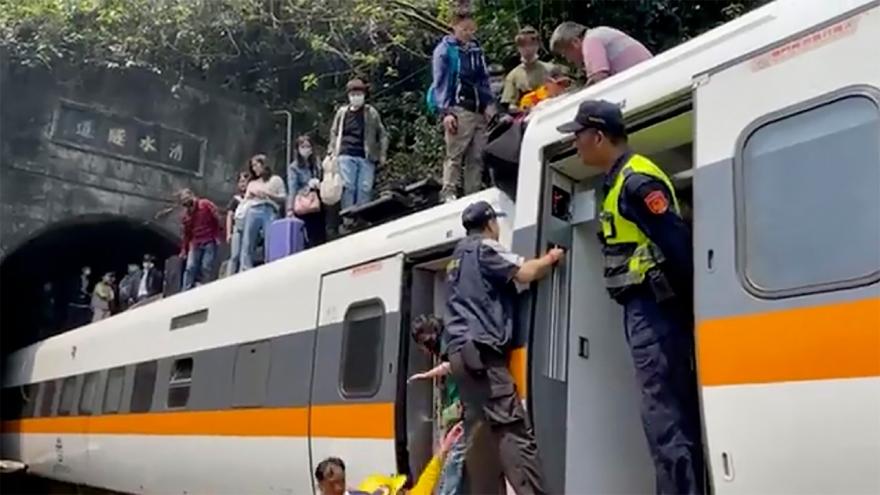 The eight-car train, traveling to Taitung, came off the rails in a tunnel just north of Hualien Friday morning, causing several carriages to hit the wall of the tunnel, the government-run Central News Agency (CNA) reported, citing the fire department.

The train driver was among the dead, the fire department told the government's executive office, and at least 69 survivors were being treated in several hospitals in the surrounding Hualien County.

Some of the dead are still awaiting identification, the government added Friday, but authorities believe that everyone trapped within the train's heavily damaged carriages have been removed. Officials said a French citizen was killed in the crash, while two Japanese citizens and a citizen of Macau were among those injured.

Authorities earlier said 51 people had died before revising the figure down to 50.

Taiwanese prosecutors have sought an arrest warrant for a construction site manager whose truck is believed to caused the accident, Reuters reported. Authorities suspect the truck hit the train when it slid down a bank next to the track from the construction site because the brake was not properly engaged.

A video on social media showed parts of an industrial vehicle heavy equipment, along with what looks like a car door beside the derailed train. In the video, a man can be heard saying, "Our train hit the truck. Where is this place? Qingshui Tunnel, the accident happened at Qingshui Tunnel. The train hit the truck, the truck fell off. It's lucky that I was at the later carriage -- I was at the fourth carriage."

"Is everyone out in carriage four?" a woman is heard shouting from inside the tunnel, in videos provided by the fire department.

Images of the crash scene show carriages inside the tunnel crumbled and ripped apart from the impact, passengers gathering suitcases and bags in a tilted, derailed carriage and others walking along the tracks littered with wreckage. Photos show the rescue operation underway, with passengers walking on top of the train to leave the tunnel and being helped down.

At least 156 people were injured in the crash, a local government official said during a news conference. The official said rescuers believed there was no one left in the train, but that rescue efforts would continue and authorities were checking to see if anyone was still unaccounted for.

"In response to a train derailment in Hualien, Taiwan, our emergency services have been fully mobilized to rescue & assist the passengers & railway staff affected," Taiwan President Tsai Ing-wen said on Twitter. "We will continue to do everything we can to ensure their safety in the wake of this heartbreaking incident."

The government has also laid out a compensation plan for every passenger, which will see NT$5.3 million ($185,500) provided to the families of each fatality. Those badly injured will each receive $91,000 and other injured passengers will receive $14,000, officials said.

The accident coincided just as a long weekend kicked off for the Tomb Sweeping Day public holiday. One couple who were on the train told CNA they were on their way to Taitung to sweep tombs and pay their respects to deceased family members, as is traditional for the event. The train was so full that many people were standing.

The crash site is located just east of the picturesque Taroko National Park, a popular tourist destination on the island's mountainous east coast.

Leaders of nearby countries extended their sympathies to the victims and offered assistance to Taiwanese authorities. Japanese Prime Minister Yoshihide Suga said he would "sincerely pray for the souls of those who have died," while Japan's former leader Shinzo Abe tweeted: "As a friend of the Taiwanese people, we will do anything we can to help, if needed, in this difficult time."

In 2018, 18 people died and 175 were injured when a train derailed in northeastern Taiwan, in the island's worst rail disaster in more than three decades.