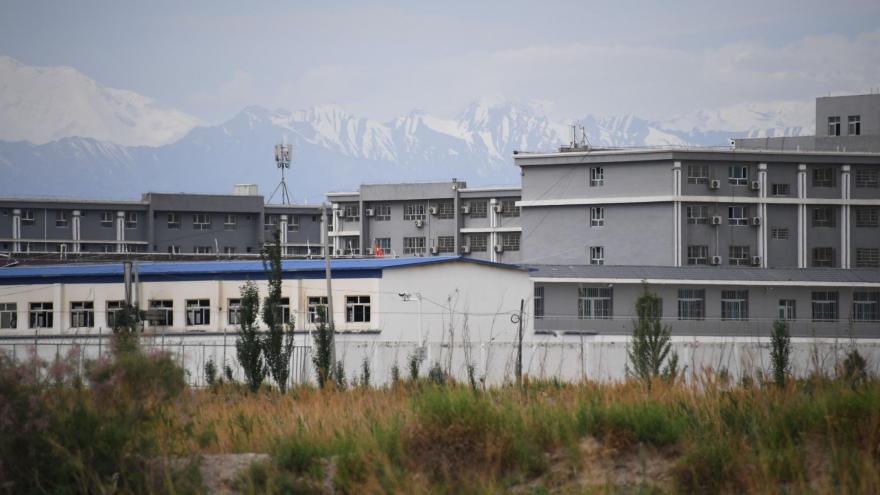 This photo taken on June 4, 2019 shows a facility believed to be a re-education camp where mostly Muslim ethnic minorities are detained, north of Akto in China\'s northwestern Xinjiang region. Source: Saul Loeb/AFP/Getty Images
By Ben Westcott and Steven Jiang, CNN

(CNN) -- A series of leaked documents threatens to shine a spotlight on the Chinese government's Xinjiang detention centers, indicating what Beijing claims are voluntary training schools for Muslim-majority Uyghurs are in fact heavily policed re-education camps.

Published by the International Consortium of Investigative Journalists (ICIJ) Sunday, the six documents include one lengthy "telegram" from the government commission in charge of security in Xinjiang, as well as a court ruling and four security bulletins.

The documents, mostly from 2017, reveal plans to construct a large number of heavily secured facilities in which detainees are forcibly taught in the Chinese language, proper "manners", and "ideological education."

Release would only come after a year, and only when the student had achieved the total point score that merited their freedom. "Take the student's score as the basic basis for measuring the effectiveness of education and training and link it directly to rewards, punishments and family visits," the document said.

CNN has not been able to independently verify the six documents. China's Foreign Ministry spokesman Geng Shuang said that the reporting on the cables was a "despicable ploy." He didn't say whether the documents themselves were real or fake.

Beijing has repeatedly insisted that the massive camps are voluntary vocational training centers, and throughout the documents the centers are referred to as "training facilities" and the inmates as "students."

But the documents also refer extensively to high security, locked doors and an insistence that inmates must not be allowed to escape. Surveillance cameras and 24-hour guard rosters are mandated.

According to the US State Department, up to 2 million mostly Muslim Uyghurs and other ethnic minority groups have been detained in the camps, a system that former detainees said was created to eradicate their language and cultural heritage.

This is the second trove of leaked documents to be published in just over a week. On November 16 the New York Times revealed what it said were more than 400 pages of sensitive Communist Party documents, which for the first time linked Chinese President Xi Jinping directly to the mass detention centers.

In a previously unpublished speech from 2014, Xi called for local officials to show "absolutely no mercy" in a crackdown on "terrorism ... and separatism." The Xinjiang government said in a statement that the documents cited by the New York Times were fake.

CNN has reached out to the regional government for comment after the publication of the new batch of documents.

According to the lengthy "telegram," released by the ruling Communist Party's Party Political and Legal Affairs Commission in Xinjiang, all the training facilities must be "absolutely safe."

"Strictly manage door locks and keys -- dormitory doors, corridor doors and floor doors must be double locked, and must be locked immediately after being opened and closed."

It adds that the detainees "may not contact the outside world" during their time in the facilities. The document finishes by stating that all work at the centers is "highly" sensitive and called for strict secrecy.

Detainees are required to learn the Chinese language and the "cultivation of manners," including "civility and courtesy, compliance and obedience."

What ideological education the students are given is left vague, other than calling on teachers to "effectively resolve ideological contradictions and guide away students from bad emotions."

The Chinese government has regularly stated these "training centers" are part of its anti-radicalization push in the region, a strategy that it credits for achieving years of stability and economic growth in Xinjiang.

The Chinese region has a long history of unrest and protests, including a 2009 police crackdown which spiraled into citywide violence in the capital Urumqi.

The government has blamed hundreds of deaths in Xinjiang in recent years on terrorists inspired by religious extremism. There had also been a spate of high-profile attacks involving the Uyghurs, a Turkic-speaking minority, in other parts of China.

Islamic beliefs are only mentioned in one document based around the sentencing of a Communist Party member in 2018. In what is alleged to be a judgment from a local court, the unnamed cadre was sentenced to 10 years in prison for "inciting ethnic hatred."

According to the documents, his crime was telling his colleagues to pray before eating, as well as urging them not to use dirty words or watch pornography.