Oath Keepers lawyer charged with obstruction in connection with January 6 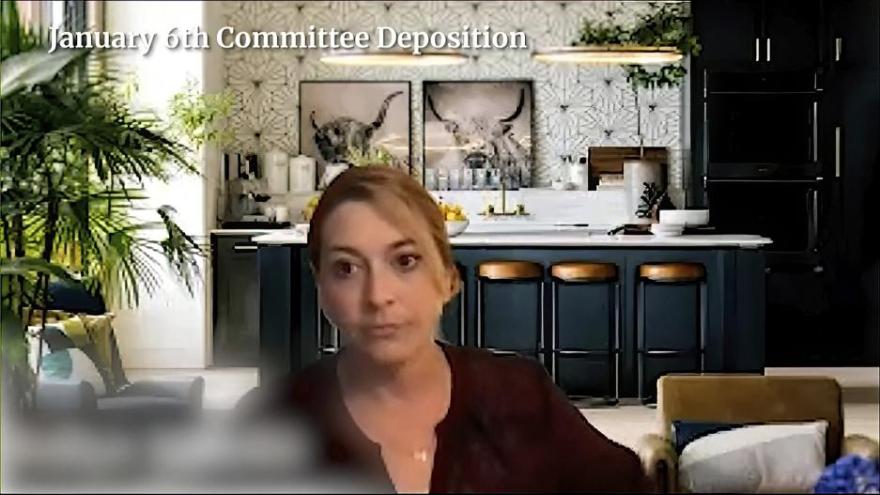 This exhibit from video released by the House Select Committee shows a deposition with Kellye SoRelle, Oath Keepers general counsel.

(CNN) -- A lawyer with close ties to the right-wing militia group the Oath Keepers has been charged with four counts related to the January 6, 2021, US Capitol attack, including conspiracy to obstruct the certification of the electoral college vote that day.

Kellye SoRelle, an attorney who volunteered for Lawyers for Trump during efforts to challenge the 2020 election results and says she's general counsel for the Oath Keepers, also faces obstruction of justice and obstruction of an official proceeding charges.

The 43-year-old attorney was arrested Thursday in Junction, Texas, following an indictment in Washington, DC, on Wednesday, a spokesperson for the US Attorney's Office in DC, Bill Miller, told CNN. Miller added that the Justice Department currently has no additional comments on the case.

She is scheduled to appear in an Austin, Texas, courtroom Thursday afternoon.

In May, SoRelle told CNN that she was cooperating with the Justice Department.

"I've done interviews. I've done everything. I'm helping them,"?SoRelle?told CNN about her cooperation, adding that she also handed over phones to investigators. SoRelle does not represent any Oath Keepers in their criminal proceedings.

SoRelle was photographed with the leader of the Oath Keepers, Stewart Rhodes, outside of the Capitol on January 6. Rhodes, along with several other members of the militia, has been charged with seditious conspiracy and is set to go to trial on September 27.

The lawyer's ties to the group have appeared in court filings as well, including in connection with a 2020 virtual meeting a week after the presidential election. In the meeting, according to court records, Oath Keepers talk about traveling to Washington, DC.