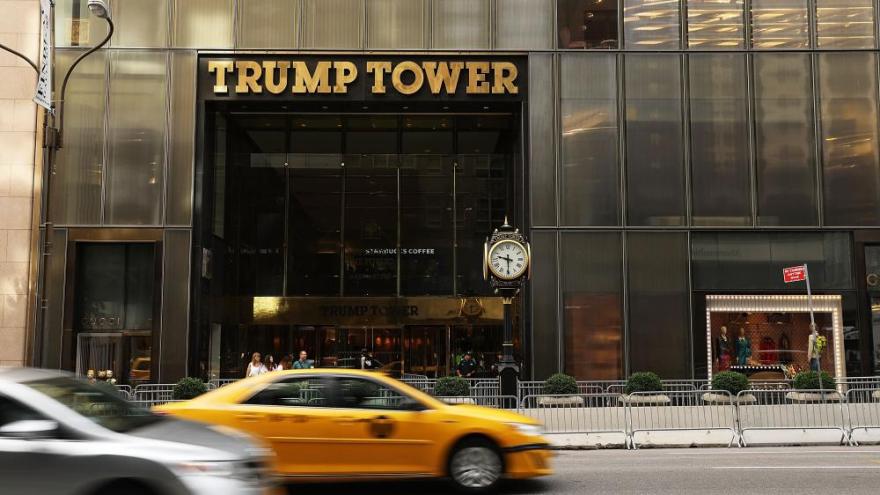 The Trump Tower stands along Fifth Avenue in August 2017 in New York City. A New York state judge on November 3 imposed a monitor to oversee the Trump Organization's financial statements.

(CNN) -- A New York state judge on Thursday imposed a monitor to oversee the Trump Organization's financial statements after the New York attorney general's office asked for added oversight to stop what they allege is a decade-long fraud conducted by former President Donald Trump and three of his adult children.

Judge Arthur Engoron wrote in an 11-page opinion that given the "persistent misrepresentations throughout every one of Mr. Trump's [financial statements] between 2011 and 2021, the Court finds that the appointment of an independent monitor is the most prudent and narrowly tailored mechanism to ensure there is no further fraud or illegality."

Engoron said he will require the Trump Organization to get court approval before selling any assets "particularly to ensure that defendants do not dissipate their asset or transfer them out of this jurisdiction."

The judge added that Trump is enjoined from selling or transferring any assets listed on his 2021 financial statement without first providing 14 days notice to the judge and the attorney general's office. The defendants are also required to provide the monitor at least 30 days notice before they undertake any corporate restructuring.

New York Attorney General Letitia James filed a $250 million lawsuit in September against Trump, his three eldest children and the Trump Organization alleging they engaged in a sweeping decade-long fraud.

Engoron's motion Thursday was in response to a request from James' office, which said it was concerned assets could be moved out of state.

"Today's decision will ensure that Donald Trump and his companies cannot continue the extensive fraud that we uncovered and will require the appointment of an independent monitor to oversee compliance at the Trump Organization," James said in a statement. "No number of lawsuits, delay tactics, or threats will stop our pursuit of justice."

A defense attorney for Trump Org. argued in court Thursday that it's routine for lenders and developers to get their own appraisals and come to differing valuations of a property during a business deal.

Chris Kise argued that there is no public interest in private, high-level deals of "corporate titans versus corporate titans" who both have the means and resources to research asset valuations as routine practice before awarding loans and insurance policies.

"The 800 pound gorilla in this case is at what point does reasonable disagreement become fraud," Engoron said in court.

Kevin Wallace of the attorney general's office told the court Thursday at the first hearing in this case since the lawsuit was filed, that the office does not want to impede daily operations at Trump Org. but does want to know what the Trump companies are saying to banks and insurers about their financial position.

Kise told the court Trump Org. would be open to working out a compliance stipulation with the attorney general under a court order. "We're not afraid of the case. We're not going anywhere," he said.

Kise also noted that just two Trump buildings in Manhattan within the court's jurisdiction, Trump Tower and 40 Wall Street, and are valued in excess of $250 million to be considered as collateral.

The Trump Org. attorney called the attorney general's lawsuit a "manufactured bill of grievances" at the hearing, arguing the appointment of a monitor on a private business "borders on nationalizations of a private enterprise."

"Every business in the state of New York needs to be very, very concerned right now," Kise said, arguing an appointed monitor for a private business would set a dangerous precedent.

Wallace told the court, "I am not representing corporate titans" but suing the Trump conglomerate to ensure a "honest and fair business environment in the state of New York."

Calling himself cynical, the Trump Org. attorney pointed out the timing of the hearing just days before voters go to the ballot box where James is up for re-election.

Kise also said he hoped any ruling made would not be used by James later in the day at a scheduled campaign event.

"This shouldn't be about political theater," Kise said at the hearing, before the ruling was announced.

Engoron is giving both sides until November 15 to weigh in on potential monitors recommended from both sides.

Separately, Trump filed a lawsuit in Florida state court Wednesday evening trying to stop James from obtaining records from the trust that holds ownership of the Trump Organization. The civil lawsuit was filed hours after a New York judge denied an effort to move James' lawsuit against into another division of New York state court.