New York attorney general files civil fraud lawsuit against Trump, some of his children and his business 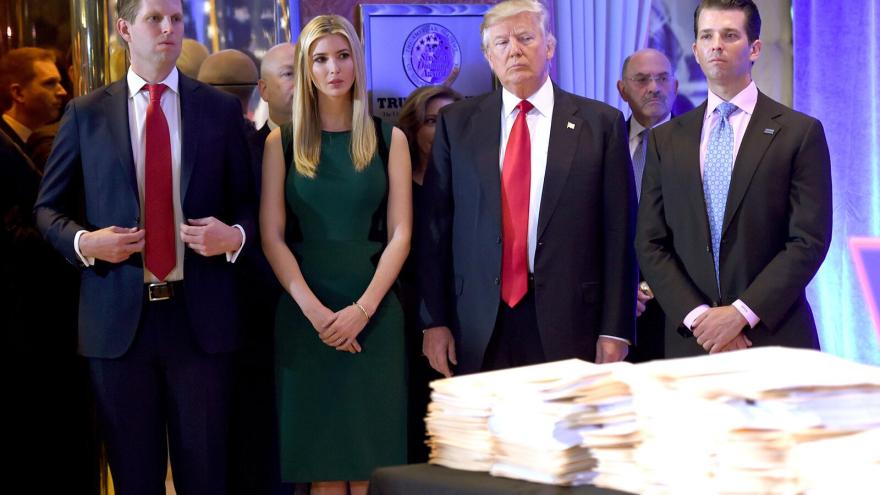 Then-President-elect Donald Trump along with his children Eric, left, Ivanka and Donald Jr. arrive for a press conference January 11, 2017 at Trump Tower in New York.

(CNN) -- The New York state attorney general filed a sweeping lawsuit Wednesday against former President Donald Trump, three of his adult children and the Trump Organization, alleging they were involved in an expansive fraud lasting over a decade that the former President used to enrich himself.

In the more than 200-page lawsuit, Attorney General Letitia James, a Democrat, alleges the fraud touched all aspects of the Trump business, including its properties and golf courses. According to the lawsuit, the Trump Organization deceived lenders, insurers and tax authorities by inflating the value of his properties using misleading appraisals.

"This conduct cannot be brushed aside and dismissed as some sort of good-faith mistake," James said at a news conference in New York.

"The statements of financial condition were greatly exaggerated, grossly inflated, objectively false, and therefore fraudulent and illegal," she added. "And as a result of that we are seeking relief, and Mr. Trump, the Trump Organization, his family -- they should all be held accountable."

Trump and his children, Donald Trump Jr., Eric Trump and Ivanka Trump, are named as defendants in the lawsuit. Allen Weisselberg, former CFO for the Trump Organization, and Jeff McConney, another longtime company executive, are also named.

James said she believes state and criminal laws may have been violated and referred the matter to the US attorney's office for the Southern District of New York and the Internal Revenue Service.

As part of the lawsuit, James is seeking $250 million in allegedly ill-gotten funds and to permanently bar Trump and the children named in the lawsuit from serving as the director of a business registered in New York state. She is also seeking to cancel the Trump Organization's corporate certificate, which, if granted by a judge, could effectively force the company to cease operations in New York state.

Trump previously called James a "renegade prosecutor" who he said is running a "vindictive and self-serving fishing expedition." The Trump Organization called her previously allegations "baseless" and denied any wrongdoing.

Responding to Wednesday's announcement, Trump attorney Alina Habba said in a statement to CNN: "Today's filing is neither focused on the facts nor the law -- rather, it is solely focused on advancing the Attorney General's political agenda. It is abundantly clear that the Attorney General's Office has exceeded its statutory authority by prying into transactions where absolutely no wrongdoing has taken place."

The civil lawsuit comes as Trump is under increasing legal pressure as prosecutors are taking investigative steps that move ever closer to his inner circle.

Trump is facing numerous criminal investigations from federal and state prosecutors involving the accuracy of his company's financial statements, interference in the 2020 presidential election, and his handling of classified documents after leaving office. Trump has denied any wrongdoing.

James alleges that the former President and his company made "scores of fraudulent, false, and misleading representations" over a 10-year period, according to the lawsuit, which specifically highlighted what it called "200 false and misleading valuations" of Trump's assets.

"The financial statements in question were issued annually; each contained a significant number of fraudulent, false, and misleading representations about a great many of the Trump Organization's assets; and most played a role in particular transactions with financial institutions," the lawsuit alleges.

"The number of grossly inflated asset values is staggering," the suit adds.

According to James, Trump's businesses prepared statements of financial condition every year to submit to banks and other financial institutions. The statements showed the financial position of the Trump businesses, James said, and were relied upon if the Trump Organization wanted to apply for loans.

Each statement was personally certified as accurate by Donald Trump, Donald Trump Jr., or Weisselberg, James told reporters on Wednesday.

Trump "made known" that "he wanted his net worth reflected on those statements to increase," James said, "a desire Mr. Weisselberg and others carried out year after year in their fraudulent preparation of those statements."

As an example of allegations Trump inflated valuations to increase his own profits. James highlighted what she says happened with 40 Wall Street, a property known as The Trump Building in New York City's financial district, which is referenced dozens of times in the lawsuit.

In 2011, Trump's company said the property was worth $524 million. He said it was worth $527 million in 2012, and $530 million in 2013, according to the lawsuit, which argued that there was not a valid basis for these inflated valuations, and that Trump falsely claimed these numbers came from "professionals."

During Wednesday's news conference James also said that Trump inflated the square footage of his Trump Tower triplex apartment in order to misrepresent the value at over $300 million.

She added: "Based on that inflated square footage, the value of the apartment in 2015, in 2016, was $327 million. To this date, no apartment in New York City has ever sold for close to that amount."

The announcement is the latest development in what has been a three-year investigation led by James into the Trump Organization's finances.

James' launched her investigation in 2019 after Trump's former fixer and personal attorney Michael Cohen testified before Congress alleging that Trump inflated the value of certain assets to obtain loans and insurance and undervalued others to gain tax benefits.

Cohen told CNN's Victor Blackwell on "Newsroom" Wednesday that the allegations in James' lawsuit represent a "complete destruction" to Trump's image as a wealthy self-made businessman.

"It's like a nuclear bomb exploded. The man has a fragile ego, which we all know. His entire life is predicated on his net worth and him portraying himself as this wonderful businessman, this massive success, this incredibly wealthy guy. And what do we know? We know that it's not true," he said.

In addition to the new fraud lawsuit, the Trump Organization is going on trial next month on charges it was engaged in a 15-year tax fraud scheme and its long-time chief financial officer has agreed to testify against the company.

Weisselberg, who served as chief financial officer at the Trump Organization for decades, pleaded guilty in August to his role in a 15-year-long tax fraud scheme, and as part of the deal, he had agreed to testify against Trump's real estate company at trial.

In recent weeks, the Trump Organization had offered to settle to ward off the lawsuit even as they denied any wrongdoing, but James' office made it clear it wasn't interested in a deal, people familiar with the matter said.

Manhattan District Attorney Alvin Bragg has been conducting a criminal investigation into the Trump Organization but has yet to bring any charges and former prosecutors have cast doubt that that would ever happen.

The burden of proof in civil investigations is lower than for criminal investigations, however, something that benefits James' office. To bring a criminal case, prosecutors would need evidence of Trump's state of mind and whether he intended to mislead or defraud anyone when he made statements embellishing the value of his properties.

Bragg's office interviewed bankers, Trump Organization employees and Trump's longtime accountant but it does not have a key insider cooperating with the investigation. One of the issues that gave Bragg pause from moving forward earlier this year was the lack of an insider who could tie Trump to the valuations, CNN has reported.

The alleged scheme "required the participation of Mr. Trump and his children," the lawsuit said, adding that the children were "aware of the true financial performance of the company."

The lawsuit, for instance, alleges that Eric Trump was involved in an approach to appraising properties in Las Vegas in a way that lowered their value for tax purposes while inflating their value on Trump financial statements.

It also quotes testimony from Trump Jr. as it describes how the value of Trump Park Avenue was allegedly inflated on Trump financial statements. An appraisal of the property by an outside firm in 2010 for a loan took into account how some of the units were rent-stabilized, lowering their value, according to James' complaint. Yet, Trump financial statements put a value on the units roughly six times higher than what the appraiser had concluded, the lawsuit said.

And the lawsuit pointed to Ivanka Trump's involvement in securing a loan for purchasing the Doral golf course in Florida and Chicago properties in 2012 -- loans that James claims were extended in part because of financial statements allegedly containing misrepresentations.

"On each of those transactions with Deutsche Bank, Ms. Trump was aware that the transactions included a personal guaranty from Mr. Trump that required him to provide annual Statements of Financial Condition and certifications," the lawsuit says.

Family was deposed by AG's office

In April, after a protracted legal fight to enforce subpoenas for Trump and his adult children's depositions, lawyers with James' office saying they were nearing the end of the investigation and needed the Trumps' testimony before making a decision.

Since Trump and Eric Trump declined to answer questions, if the case goes to trial, the jury can draw an "adverse inference" against them for not answering questions. That could result in a higher judgment against them or the company if they're found liable.

James noted that Trump and Weisselberg invoked their Fifth Amendment privilege during her news conference.

"When asked under oath if he, Mr. Trump, continued to review and approve the statements after becoming president of the United States in 2017, Mr. Trump again invoked his Fifth Amendment privilege and refused to answer," James said Wednesday.