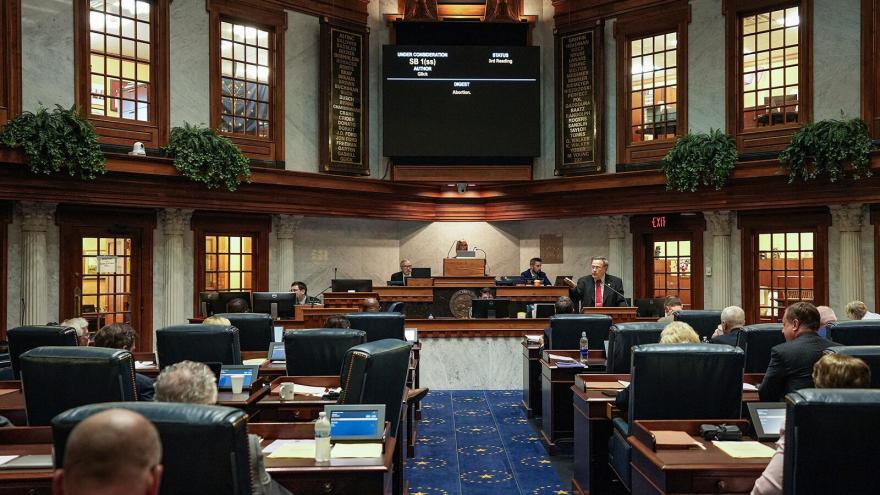 A near-total abortion ban in Indiana is headed for debate in the state's full House of Representatives this week after clearing a key committee. Pictured is the Indiana Statehouse in Indianapolis on Saturday, July 30.

(CNN) -- An Indiana bill that would ban abortion at all stages of pregnancy with limited exceptions is headed for debate in the state's full House of Representatives this week after clearing a key committee in the chamber Tuesday evening.

The GOP-authored legislation passed the Indiana House Committee of Courts and Criminal Code with an 8-5 vote following hours of testimony from the public. The committee vote nearly fell on party lines, with Republican Rep. Cindy Ziemke siding with four Democrats to oppose the measure.

The version of the legislation that passed in the state Senate over the weekend, Senate Bill 1, provides exceptions only for rape, incest and for when the life of the mother is at risk. Indiana presently allows abortions up to 20 weeks after fertilization (or 22 weeks after the mother's last menstrual period).

If the bill receives enough votes Thursday, it will move to a third reading on Friday before a final vote is expected to be taken on the full bill, House Democrats said.

Still, several amendments to the bill were discussed Tuesday, including changes to the language on abortion and abortion clinics, and a push to delay the bill's effective start date from September 1 to November 1, according to House voting records.

Indiana and West Virginia have recently convened special sessions to consider restrictions on abortion since the US Supreme Court overturned Roe v. Wade, ending a federal constitutional right to the procedure and sending the matter to the states for consideration.

Discussion of the legislation in the state Senate on Saturday was fiery and emotional at times. State senate President Suzanne Crouch, a Republican, threatened to clear the gallery more than once following outbursts from both inside the session and from protesters gathered outside.

CNN affiliate WRTV filmed a large number of protesters chanting opposition to the bill in the hall. Some held signs reading "my body, my choice," and "abortion bans replace freedom with force."

The bill ultimately cleared the state Senate in a 26-20 vote following nearly four hours of debate. Ten Republicans crossed party lines voting against the bill, with some of them saying the near-total ban did not go far enough.

Throughout the legislative cycle, anti-abortion group National Right to Life and its Indiana affiliate have expressed opposition to the bill, calling it "deeply flawed" and a "weak and troubling" measure.

"The bill fails substantively in many areas, including its failure to provide any meaningful enforcement provisions. This bill goes through the motions on paper, but lacks any teeth to actually reduce abortions in Indiana by holding those who perform abortions or would intentionally skirt the law accountable with criminal consequences," Indiana Right to Life said in a statement.