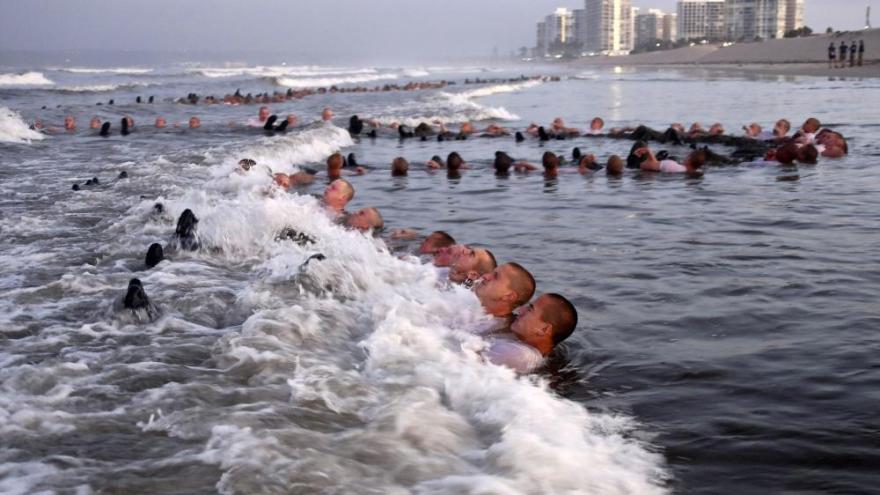 Navy SEAL candidates, participate in Basic Underwater Demolition/SEAL (BUD/S) training in Coronado, California, on May 4, 2020. There have been 10 BUD/S training related deaths since 1953, according the Navy.

Navy investigators concluded Mullen died in the "line of duty, not due to his own misconduct," a press release from Naval Special Warfare Command Public Affairs said.

Mullen's death has sparked criticism of the Navy SEAL's intense Hell Week training program. There have been 10 Basic Underwater Demolition/SEAL (BUD/S) (the formal name for the program) training related deaths since 1953, according to the Navy.

The over 300-page investigation explains the cause of Mullen's death, the events leading up to his death in the final hours of the Hell Week training program, and possible signs that were missed between medical caregivers and observers. The Navy has adopted some process changes since Mullen's death as a result.

Administrative actions have been taken against the former Commanding Officer of Basic Training Command, Capt. Bradley Geary, the Commander of Naval Special Warfare Center, Capt. Brian Drechsler and senior medical staff under their command, the Navy said. An administrative action is a typically in the form of a letter to the service member instructing them on correcting deficient performance. It does not always lead to the end of a career.

Those administrative actions "will be reviewed during the" separate investigation directed by senior Navy leaders and led by Naval Education and Training Command that has not been completed or released yet, the Navy said. This separate investigation would likely be the vehicle for any future accountability actions if found to be warranted, a US military official said.

A turn in the last 24 hours

Mullen was coughing up what fellow classmates described as "phlegm," "mucus," and "dark-colored fluid" on the second to last day and final morning of Hell Week, according to interviews included in the Navy's investigation.

Hell Week is a five-day intense training exercise designed to "expose candidates to extreme stress in a controlled environment," according to a Hell Week Validation Report included in the investigation. Hell Week is one part of a 56-week training program candidates must complete to become Navy SEALs.

During the five-day exercise, candidates are "only allotted two 2-hour sleep periods," an interview included in the investigation said.

"To the students it seems like chaos, intentionally so," an interview included in the investigation said. "It replicates the confusion and conditions in the field during war."

Candidates participating in Hell Week are medically evaluated daily by a member of Naval Special Warfare Center Medical to determine if they are able to continue training. During training, Basic Training Command medical staff are in the field with candidates and instructors to respond to any medical emergencies or issues.

Mullen appeared in good health and was completing the training successfully, according to multiple interviews from fellow classmates, instructors and medical staff included in the investigation, until Thursday, February 3, the second to last day of the training.

Several fellow classmates interviewed said they observed Mullen coughing up fluid on Thursday. One fellow classmate described the fluid as "dark-colored," another described Mullen was "spitting up orange stuff" and noted he had a "very deep" cough, interviews in the investigation said. A Basic Training Command staff member treated Mullen for knee pain on Thursday, but no breathing issues were mentioned, the member said in an interview.

"There is no written policy requiring Naval Special Warfare Center Medical be contacted if a student is being treated with oxygen," a Basic Training Command staff member said in an interview included in the investigation.

Center Medical "should have known" Mullen was put on oxygen that morning, a Naval Special Warfare Center Medical doctor interviewed for the investigation said. "It may have warranted a chest X-ray," the doctor said.

Mullen returned to training between those two instances of receiving oxygen. After receiving oxygen the second time, Mullen was transported to the location where the rest of the candidates were completing Hell Week by ambulance, a paramedic who treated Mullen from Basic Training Command that morning said.

Mullen completed and passed the medical check from Naval Special Warfare Center Medical after he finished Hell Week. He was moved from the classroom where he was briefed with his fellow classmates to the barracks in a wheelchair due to the extreme swelling he was experiencing, multiple interviews included in the investigation said.

One of his fellow classmates described Mullen as "looking like the 'Michelin Man' because he was super puffed up at the final medical check," an interview included in the investigation said.

A fellow classmate of Mullen's said that while Mullen completed the medical check successfully, he was "still coughing up fluid when he got to the classroom," where they were all briefed after completing training.

Another classmate observed Mullen sitting in the classroom with a Gatorade bottle "between his legs spitting bloody mucus inside of it," an interview included in the investigation said.

Ten classmates who completed the Hell Week training with Mullen noticed him coughing up mucus and discolored fluid from Thursday to Friday morning when the training was complete, according to interviews included in the report.

After completing the training, Mullen returned to the barracks to rest with his fellow classmates. He was observed by candidates awaiting training students at the command, or CATS, assigned to watch over the candidates and assist them in recovery. They are not medically trained.

One of the people assisting with watching over the candidates said he "could tell Mullen was going to need constant watch and assistance due to his observation that Mullen appeared to be coughing and spitting up blood into a Gatorade bottle," an interview with the person said.

Candidates are not encouraged to call 911 after completing training, because "from the perspective of medical staff and candidates, outside medical staff are not familiar with the physical effects of the extreme training candidates undergo," the investigation said. If candidates go to the hospital and are misdiagnosed or diagnosed with something that disqualifies them, they are at risk of being medically disqualified from training.

On a copy of the post-Hell Week student brief included in the investigation, No. 11 states, "DO NOT go and see other/outside medical providers. We will see you at any time (If it is a true emergency call 911)... IF YOU GO AND SEE OTHER MEDICAL PERSONNEL WHO DO NOT UNDERSTAND HELL WEEK, THEY MAY ADMIT YOU TO THE HOSPITAL OR GIVE YOU MEDICINES THAT ARE NOT COMPATIBLE WITH TRAINING."

Mullen's condition continued to deteriorate. Between 3:50 p.m. and 4:09 p.m., "Mullen was seen 'gasping for air' and appeared to be 'super swollen' or 'bloated,' with blueish colored skin and fluids coming out of his mouth," the findings of facts in the investigation said.

At 4:03 p.m., the officer-in-charge called the duty medical officer again who told him to call 911. The federal fire department received a call at 4:09 p.m. and arrived 15 minutes later. Mullen was unresponsive at the time they arrived, the investigation said.

Mullen stopped breathing five minutes before Emergency Medical Services showed up, one of the people observing him said in an interview.

Mullen was then transported to the nearest hospital and was declared dead at 5:35 p.m.

Since Mullen's death, the Navy has adopted several changes including adding advanced cardiology screening for Navy SEAL candidates, including proactive pneumonia prevention training by giving candidates an injection of Bicillin ahead of BUD/S and extending medical personnel to observe candidates who have completed the training for 24 hours after Hell Week ends, according to the Navy.

There is also now a "mandatory, formal shift turnover" between Basic Training Command Medical and NSW Central Medical to "discuss the medical status of candidates," the Navy said.

No changes to the Hell Week training itself have been implemented.

While no drugs were found in Mullen's system according to the autopsy, Mullen's death has sparked concern around candidates' use of performance enhancing drugs to push themselves physically in the program.

One of the changes the Navy has adopted since Mullen's death is including "medically safe-to-train" PED testing "through urine tests" for candidates, the Navy said. The Navy is also working on an "exception to policy" to expand the authority to test candidates for PEDs in order to help in "understanding the scope of PED use within the force and counter unauthorized PED use," the Navy added.

Rear Admiral Keith Davids, the Commander of Naval Special Warfare Command which oversees the SEALs and their training, sent a memo to his command on Oct. 4 after news articles about Mullen's death and other issues within the SEALs were published, reminding everyone in the command to "create a culture of accountability." CNN obtained a copy of the memo.

"We must continually self-assess and self-correct so that we identify problems before they grow into larger, systemic issues. I expect everyone in our community to create a culture of accountability and to assess and use the tools at your disposal to maintain good order, discipline and mission success," the memo states.