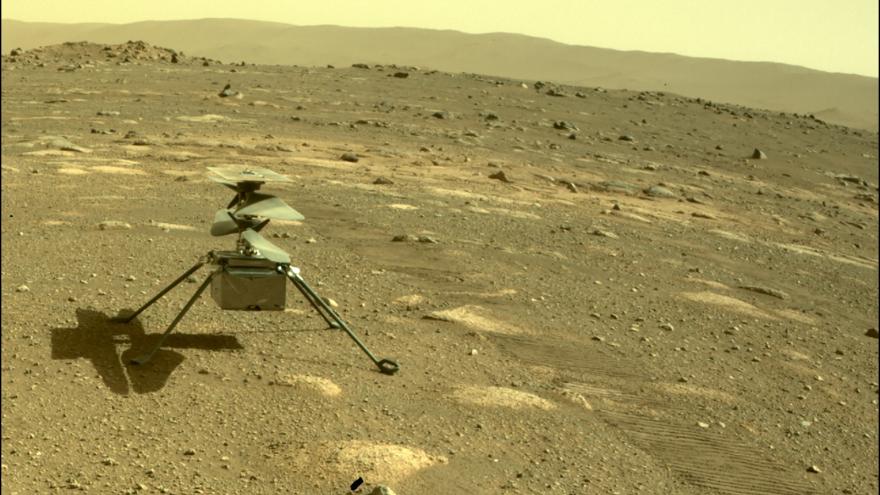 The Ingenuity helicopter can be seen on Mars as viewed by the Perseverance rover on April 4. The helicopter survived its first night on the freezing-cold surface of Mars. Mandatory Credit: JPL-Caltech/NASA
By Ashley Strickland, CNN

(CNN) -- The Ingenuity helicopter survived its first night on the freezing-cold surface of Mars, a major milestone in the rotorcraft's journey ahead of its historic first flight.

Jezero Crater, an ancient lake bed on Mars and the current site of the Perseverance rover and Ingenuity helicopter, can drop to temperatures of minus 130 degrees Fahrenheit. That's low enough to do significant damage to the helicopter's electrical and battery components.

The 4-pound helicopter finally separated on April 3 from the belly of the Perseverance rover, where it has been stashed since before the rover launched from Earth in July.

Ingenuity went through a series of movements to unfold from beneath the rover, which looked like the metamorphosis of a butterfly, before dropping the final 4 inches to the Martian surface.

"This is the first time that Ingenuity has been on its own on the surface of Mars," said MiMi Aung, Ingenuity project manager at NASA's Jet Propulsion Laboratory in Pasadena, California, in a statement. "But we now have confirmation that we have the right insulation, the right heaters, and enough energy in its battery to survive the cold night, which is a big win for the team. We're excited to continue to prepare Ingenuity for its first flight test."

When Ingenuity does fly, which could happen as soon as April 11, it will be the first powered, controlled flight on another planet. In a nod to the first such feat conducted on Earth, Ingenuity carries a swatch of fabric from the Wright brothers' plane, Flyer 1.

Ingenuity, the first rotorcraft sent to Mars, presented a challenge to the engineers who designed it for several reasons. It needed to be small enough to tuck up under the rover without endangering Perseverance's mission, which is the first to search for evidence of ancient microbial life on Mars.

Ingenuity also had to be lightweight in order to fly through the Martian atmosphere, which has just 1% of the atmosphere present on Earth, while still having enough power to heat itself and survive the frigid Martian nights. The thin nature of the atmosphere on Mars makes it harder to generate lift and get aloft.

Soon after Perseverance deposited Ingenuity in the center of its airfield, the rover backed away from the helicopter. This allowed the helicopter's solar array to gather critical sunlight.

Perseverance sent back images of the helicopter's four legs sitting on the surfaceon April 4. The helicopter's blades, currently stacked in alignment on top of each other, will be released on April 7, and the mission team on Earth will send commands to the helicopter to "wiggle" the blades.

The helicopter also needs to go through some checkouts of its computers, which will help Ingenuity autonomously fly through the Martian atmosphere.

Now that Ingenuity isn't borrowing power and heat from the rover, the helicopter will send back information on the performance of its power and thermal control systems over the next two days. This will allow the helicopter team to configure the settings necessary to make sure Ingenuity survives the next 30 days of its mission.

Ingenuity is a technology demonstration, which means that its mission is short compared to the rover's two-year plan to explore Jezero Crater. Now that the helicopter is on the Martian surface, it has 31 Earth days, or 30 Martian sols, to conduct up to five test flights.

During the first flight, the helicopter will attempt to rise about 10 feet (3 meters) in the air from the middle of its flat 33-by-33-foot (10-by-10-meter) airfield, make a turn and touch back down. The trial should last for about 30 seconds. Future flights will test the helicopter's ability to fly higher and longer.

Meanwhile, the Perseverance rover will sit on a nearby overlook and observe the flight, capturing images, video and audio. Those will reach Earth in the days after the first flight.

Once Ingenuity's journey comes to an end, the rover will focus on its science mission and begin studying rocks and collecting samples that will be returned to Earth by future missions.

"Our 30-sol test schedule is frontloaded with exciting milestones," said Teddy Tzanetos, deputy operations lead for the Ingenuity Mars helicopter at JPL, in a statement. "Whatever the future holds, we will acquire all the flight data we can within that timeframe."

Subscribe to CNN's Wonder Theory newsletter: Sign up and explore the universe with weekly news on fascinating discoveries, scientific advancements and more.